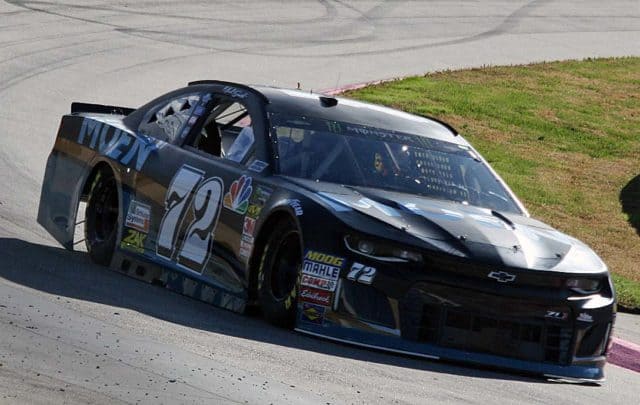 At the beginning of this decade, Cole Whitt stepped into the NASCAR spotlight. Since then, he’s self-admittedly faced many ups and many downs.

The one-time JR Motorsports XFINITY Series driver has made a living over the past handful of seasons competing for smaller race teams; the likes of Front Row Motorsports, Swan Racing, BK Racing, Premium Motorsports and currently TriStar Motorsports. Throughout it all, he still has a passion for racing.

After driving the full 36-race schedule for TriStar in 2017, Whitt has split seat time with Corey LaJoie this year. Competing in just 12 races this season, Whitt’s best finish came in early April at Texas Motor Speedway, where he crossed the finish line in 19th. Meanwhile, he has four top-25 finishes compared to LaJoie’s three in nine less starts.

But moving forward, Whitt isn’t sure what his impact in NASCAR will be, as he misses his family in California.

Whitt recently spoke with Frontstretch to discuss family, his season, what TriStar Motorsports means to him and much more.

Dustin Albino, Frontstretch: This year, you’ve competed in 12 races for TriStar Motorsports. Overall, how would you assess the season?

Cole Whitt: I think it’s been good for me. I think we’ve ran pretty well. I feel like we’ve been pretty on par with where we were last year, if not better at certain times. Some races we are a little better, some races we might be a little worse, but I think we’ve performed well and trying to finish it out strong with a couple more.

Albino: You’ve run three races since Sonoma. Can you even establish a rhythm?

Whitt: Yeah, I thought it was going to mess me up, but after about eight laps in practice I ran my fastest lap here. I guess it goes pretty easy. I thought it would mess with me.

Albino: How much do you keep up with racing when you’re away from the track?

There’s not a whole lot I can do for them because they take care of pretty much everything by themselves. I watch them and try to keep track of my team and my car.

Albino: What’s your relationship with Corey?

Whitt: It’s good. We raced against each other last year. I was one of the ones who was telling him he should come over here and do this deal because I thought it was a good fit for him. He’s had his ups and downs, for sure, and I wish it went a little smoother at the start, but I think he’s shown some speed and been on par with where he needs to be.

Obviously, we wished we could have worked some of those bugs out and having him be consistent earlier in the year, but he sparked some interest with some good sponsors and brought a little bit of money here and there. That’s been great that he’s driven some interest in the team and himself. I think if anything it’s elevated him a little bit. I just hope he can build a good future around it.

Albino: How hard has it been mentally to be running with the same team as last year but with a reduced schedule?

Whitt: It’s not too bad and I’ve been enjoying it. At first, it was tough to step away, but I’ve been enjoying spending time away from the track and with my wife, friends and family and do some things that I haven’t been able to do in a long time.

It’s been mentally challenging to come back to the track and get in the rhythm of everything, but as far as my mental state I actually feel really good where I’m at and how it’s been.

Albino: Last year at Richmond, you mentioned Mark Smith (founder of TriStar) got you back into wanting to race again and it was a lot of fun. How much does this family team mean to you?

Whitt: The team has done a lot for me. Without them, I wouldn’t be set up in life as good as I am, financially and just in general as a person. We miss Mark a lot (passed away after a bout with cancer in July 2017). I wish he would have gotten to see more of what we’ve been able to do, but I think he’s proud of what we had and did do. I know he’s watching over us.

I just hope he’s proud of what we’ve done and I think he would be. Starting a new team like they did and coming out of the box and leading laps in Daytona, I’m glad he got to see that. We had some good runs here and there and he got to see some of those. A lot of these teams come and go and struggle, but we’ve been able to come in and establish ourselves and be one of the teams competing with some of these other guys at the back of the pack.

TriStar means a lot to me just as far as they stepped up and helped me out more than once in my career when no one else would. Mark always believed me as a driver – probably more in myself than I have, and I just hope that we’ve made him proud.

Albino: Were there ever any similar thoughts this past off-season where you weren’t sure if you wanted to continue racing?

Whitt: It’s been a slow, steady drive of me to get away from racing and move back to be around family and friends and to live a normal life. That’s been a drive for the past couple of years. I’m glad I haven’t done it yet, because I’m glad of the things I’ve been able to do over the past couple of years and experiences that I’ve had with that. Slowly, when that time will come – maybe it will be this off-season, we’ll just kind of see. I haven’t set any sort of timeline. We’re holding our plans loosely and kind of seeing where life takes us.

Albino: So for you, that decision will be more family-oriented than anything?

Whitt: For me, yeah. It’s not about the sport or the team – it’s definitely not team-related at all. I told Bryan [Smith, team owner] that if I’m racing for anyone, they are the only team that I’ve been with. I just don’t have much of a desire to do anything, and there are not many opportunities, anyways. They are the people who have given me opportunities when no one else would and I’ve tried to help them elevate their team when I can.

At the same time, it’s been the drive to go back to family. It would be different if my family lived in North Carolina and I was able to see them throughout the week and spend time with them. I’m watching my niece grow up through a computer screen and different things like that. It’s pretty hard to see them all do their life without me. I feel like it’s something me and my wife would like to be around.

Albino: How have you seen this team grow since starting up last year in Cup?

Whitt: It’s been a struggle for sure at times. I know it’s not easy for Bryan and them. I see it day in and day out that it’s a struggle, but the back part of this is definitely a struggle for a lot of guys. They’ve been growing, they want to be a Cup team, they want to be solid and they want to race. They don’t want to come here, put a car in the show and collect then go home. Every time they put forth the best effort they can and I think that says a lot about who they are and how they operate.

Albino: What have you learned most about yourself since joining TriStar in the Cup Series?

Whitt: Just to enjoy the little things. I’ve come from a background of winning in everything going up through the ranks of winning races and championship. I think through Mark Smith and TriStar Motorsports, it’s allowed me to enjoy the small victories and what’s really successful at the end of the day.

Albino: How surprised are you with the way your career trajectory has gone?

Whitt: Nope, not yet. I’m sure other people would like to know sooner. I’m taking it one day at a time right now.

Albino: We see a lot of drivers stepping away at a young age. Why do you think that is?

Whitt: I don’t know. That’s up to them. I can only speak on my behalf and for me it’s being away from my family since I was 14 years old. I’m 27 now, married and hopefully blessed enough to start a family one day and live around my family. I want to support my niece and brother as they grow up and help them.

Albino: Have you personally thought about retiring early?

Whitt: I don’t even know I would technically say I’m retiring or whatever. Being away from the family is the thing for me. If I can race out of California, I don’t know, maybe I would. I don’t plan on that because that would be hard just with the travel alone, but I don’t have a whole lot of stead-fast things put in order and it probably sounds crazy to a lot of people, but it’s just really what I believe and feel strong in it and feel led that way.

Find a good Sprint Car or Midget ride and become a Series Champion.