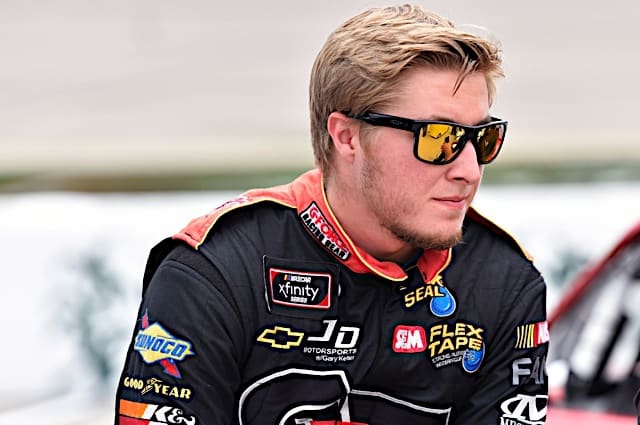 Over the past few seasons, JD Motorsports has produced multiple elite talents. Garrett Smithley wants to add his name to that list.

Smithley, 26, is in his third full season in the No. 0 ride — an opportunity that was originally scheduled only to be a three-race deal. Almost three full seasons later and he is still plugging along with the team and credits a lot of that to team owner Johnny Davis.

“I think it’s a mutual respect,” Smithley told Frontstretch of his opportunities at JD Motorsports. “I respect Johnny so much. He’s absolutely the hardest working car owner in the garage, hands down. He’s in here fighting, clawing, just like we are — finding new tires, used tires. I watched him last year go under a car to try and fix a car after a crash.

“I’ve really embraced what JD Motorsports and this program is about. We’re trying to keep these things clean and improve on what we can do, and really understand that we’re not going for wins. Obviously, we would like to, but our win is a top 10, top 15 or the occasional top five. We know our strengths, we know our weaknesses, and we just try to grow as much as we can together.”

Since debuting at Atlanta Motor Speedway in 2016 with JDM, Smithley has earned four top-10 finishes, including his first top five earlier this season at Daytona International Speedway. But for a team that has 24 employees at the track on a weekly basis, he thrives on being under the radar.

“We’re obviously the small guys on the block, but that’s what make us so special,” Smithley said. “Some people don’t like being the underdog, but I think it’s cool to be the underdog. We’re not supposed to beat those [top teams] and compete with those guys, and sometimes we get the chance to.”

Smithley said that since JDM is a small team, the employees only get Sundays off. Once Monday roles around, it’s time to get digging at the shop to prepare the next fleet of race cars going to the track.

In the last three seasons, JDM has seen the likes of Ross Chastain and Ryan Preece overachieve in the equipment provided. Next season, Preece will be driving the No. 47 JTG-Daugherty Racing Chevrolet in the Monster Energy NASCAR Cup Series while Chastain is in contention to pilot the No. 42 XFINITY ride — the same car he won in at Las Vegas Motor Speedway in mid-September.

“I think this is the best non-affiliated Cup team in the XFINITY Series,” Smithley said. “I think Ross proved it this year for sure in the [No.] 4 car with what he’s able to do. I think Johnny is sad when people go, but at the end of the day, I think he’s pretty proud of us. He can pride himself and say he understands this is the XFINITY Series and we all want to get to the Cup Series. It’s just a really special team.”

Evidently, JDM hones the driving skills of young superstars before they heading off to find bigger opportunities. When it comes to Smithley, he doesn’t even think Davis should have taken a realistic chance on him three years back.

“When I came to Johnny trying to get into this sport, I had less than 10 stock car races to my name,” Smithley said. “I would like to think he saw something in me. Together, we’ve built it into a playoff-making team in the [No.] 4 car with Ross. When I got here, it was a two-car team with a part-time third car. Now, we’re a full-time four-car team, and I would like to think I was some type of part of that.”

Much like Preece and Chastain, Smithley is hoping to get opportunities with big race teams. Following the conclusion of the 2016 XFINITY season, Preece stepped out of the No. 01 car to focus on modified racing. Meanwhile, he took out a big chunk of change with a loan in order to get an opportunity at Joe Gibbs Racing in a pair of races. He won at Iowa Speedway in his second outing after a runner-up finish in his debut at New Hampshire Motor Speedway. Now, he’s going Cup racing in 2019.

Chastain blossomed this season after just missing out of the playoffs in each of the past two years. In late-August, he was announced to be driving the No. 42 Chip Ganassi Racing Chevrolet, where he dominated two races, finishing second in the third.

Regardless, Smithley is hoping to have a similar chance, possibly having to bet on himself.

“Look at Ross living the dream, winning an XFINITY race with the opportunity he had with Ganassi,” Smithley said. “He did that coming out of this shop. Ryan Preece did it last year coming out of this shop with this team. We all want to win, and one day, I want to be full-time in the Cup Series — that’s the ultimate goal — but I want to make the most of my time here at JD Motorsports.”

As for 2019, Smithley said he hopes to return to JD Motorsports. A few months back, Davis told Frontstretch he expects the Number Nuttin’ driver to return to the team next year.

In order to get more opportunities, Smilthey believes he needs to become an expert on the business side of racing. After all, he’s one of the drivers Monday-Thursday that is out there searching for sponsorship.

“With the expectation of Ross having his Cup opportunities and some other opportunities and having more funding, that’s the difference between the [No.] 4 car and the [No.] 0 car. It’s that simple,” Smithley said. “It’s just resources. Going into the off-season, that’s my plan, to work on that part. As a race car driver, I think, every lap, you get better. All the way from guys that are rookies to Jimmie Johnson. I think you’re always learning and everybody is trying to get that little tenth, hundredth and thousandth of a second.”