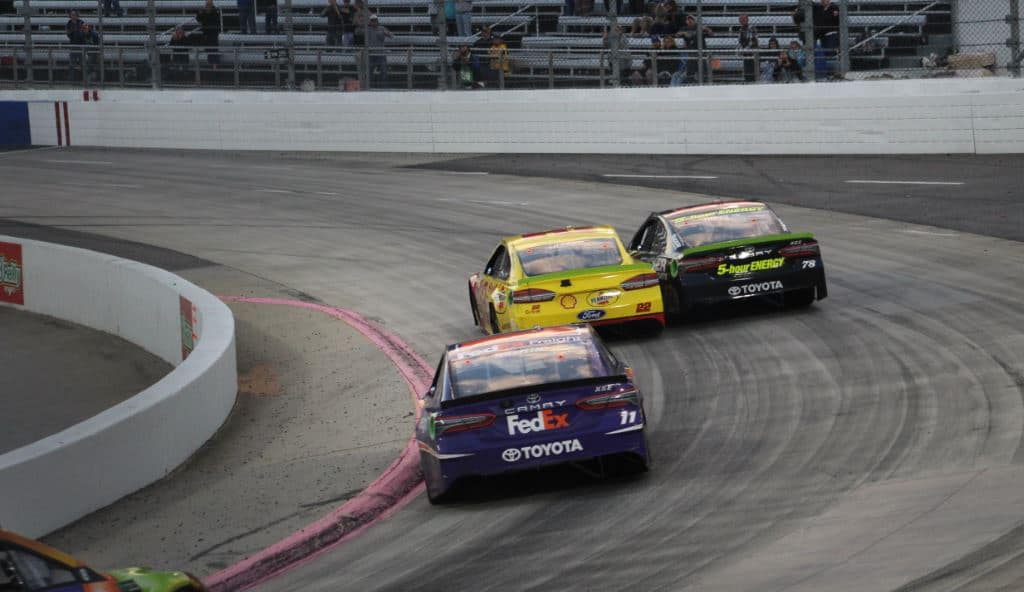 This past weekend’s race at Martinsville Speedway provided some excitement and controversy when Joey Logano and Martin Truex Jr. raced for the win. Logano used the old-fashioned bump-and-run to move Truex out of the way for the win and some people were not pleased, including Truex.

Was this fair play or dirty pool by Logano? Should he have made a clean pass or was what he did just fine for a berth to Homestead on the line?

Meanwhile, we have never seen a driver outside of the Championship 4 win the final race at Homestead in the Monster Energy NASCAR Cup Series since the implementation of the current elimination format. This could be the year that happens as several favorites have been eliminated from the playoffs and many are very good at Homestead.

Is this the year it happens, or do we once again see a Championship 4 driver win the race to win the championship?

Q: How do you feel about Martin Truex Jr.’s comments about Joey Logano after the race on Sunday? Fair game by Logano or dirty pool? Walter P., Newark, DE

A: All fair game. There is absolutely nothing wrong with what Logano did to Truex. That is the typical short track racing we all love to see in NASCAR. The bump and run is the most famous short-track move and Logano executed perfectly.

Now Truex feels it was dirty because he raced Logano clean all race long and Logano acknowledged as much post-race. If you go back and look throughout the race, Truex did bump Logano quite a few times for the race lead. This may not have been the case in the final 10-15 laps, but earlier in the race, there was contact. Truex took it a bit overboard, but I can understand the frustration of losing a race as big as Martinsville and a chance to get to the Championship 4 at Homestead.

Short track racing showed its finest display Sunday at Martinsville. We saw drivers move each other out of the way, but in the old-fashioned way, without completely dumping the driver like Denny Hamlin did with Chase Elliott last season in this same race. There is a big difference with what Hamlin did versus what Logano did.

It was thoroughly enjoyable to see such great racing. Truex was strong throughout the race after starting in the back due to failing pre-race inspection. He was very determined to try and win his first short track race of his career and it seemed like Sunday was one of the best opportunities to get that elusive win.

People will complain that it was a dirty move because Truex is a clean racer and argue that he would not have made the same move had the situation been reversed. However, when something as important as a championship is on the line, these things will happen and Logano took advantage of it to get the win.

There was absolutely no dirty pool by Logano and his move was completely fair. While I can’t say it was clean, the bump and run is going to happen when wins are as valuable as they are these days.

Fans are going to have issues with Logano and the move he made but in reality, they need to move past it and realize he did nothing wrong.

Martinsville is always entertaining and that will never stop. Sunday was proof enough of that.

Q: Is there a chance that this is the year we see a non-playoff driver win at Homestead? Or will one of the Championship 4 win once again to clinch the title? Amanda S., Olympia, WA

A: There is a good chance that some non-layoff driver will win at Homestead this season for a few reasons. I know ever since this format came out in 2014, a Championship 4 driver has won the race, but this is the year somebody else wins.

The playoff field has been insane this season and favorites such as Kyle Larson and Brad Keselowski, both of whom are more than capable of winning in Homestead. Larson has been arguably the best driver at Homestead since his rookie season in 2014 and he will be one of the favorites, if not the favorite, heading down there in a few weeks.

There are still four very strong drivers who are going to be eliminated after this round too, so we cannot forget that they can be spoilers when the series heads to Homestead as well. I have been waiting for the season where one of the Championship 4 does not win the final race of the season and instead have to race it out near the front of the field or in the middle of the pack.

While watching the championship contenders fight for the win is the most entertaining option, watching the “race within a race” for the title further back in the field would certainly provide for a different perspective.

We have seen similar situations in the XFINITY and Camping World Truck series, but never in Cup. This could definitely be the year it finally happens at NASCAR’s top level. I feel very confident that it will and Larson is the guy who can get it done.

After the disappointing year he has had, it would be fitting for Larson to go out with a win at his best track and have some momentum going into next season.

There will not be a rogue winner at Homestead because the non-chasers get out of the way of the chasers and refuse to race them hard.

Bill B:
Case in point Kyle Larson ran third one year, do not remember which, but was catching the leaders (Chasers) at a substantial clip and then just stalled out. No one will ever convince me that NASCAR someway somehow, communicated with Larson to stay in third and let the “leaders” battle for the win.

What I am completely rooting for is a case of a non-winner making it to Homestead in 4th position and then due to mechanical failure or weird circumstance have the top 3 crash out at the same time and the 4th place team have another issue later on and all of them finish 30th or worse but hey the champion is the winless guy who finished 31st. The damaged car policy makes this more likely as well.

This would really send NASCAR into a faster nose dive as people would realize what a sham the Cup championship is under the current format. Johnson’s lucky “7th” is the closest this scenario has come to.

If the stupid playoff has to stay here might be a better option, reduce the field to 12. Change the number of races to 9. Eliminate after 3 races like now but have the 4 “top” drivers have 3 races to decide the championship and keep the current points system in play through those races as well. This would I believe give fans a better feeling about the champion since there would be a least a small taste of needing the consistency required to win and have it be at three different types of tracks. i.e. final three would be Martinsville, Phoenix, and Miami. Essentially Texas would be the elimination race of round two. Richmond would go back to being the final regular season race as the schedule other than the Texas/Martinsville flop would stay the same (Ugh).
For the record, I do not mind the current points system with the stages but it has not seemed to help with the TV commercials that occur during green flag racing. Has anyone done a study on pre stage race commercials compared to now two years of stage racing commercial breaks? Specifically, looking at have the number of green flag laps between commercial breaks changed substantially or did the TV folks just get to sell more commercial slots due to the “long” stage breaks for commercials.
Anecdotally it does not seem different within the full races I have watched.

I wonder do the “Playoffs” have any bearing on Nascars inability to add fans, either at the track or on TV? My gut tells me no because this thing has been going on for 14 years now. Somebody 30 years old now wouldn’t have been able to drive, other than a learners permit, when it started.

Tom B
Reply to  Brian

How about this scenario using the current system: A driver wins every race throughout the year, then in Miami-Homestead he leads every lap but coming down for the checkered flag he loses by .009 seconds to a play off contender who’s best finish for the year was third. What would the fans think about this? Pick any two drivers for this theory. The funniest one would of been Junior and Danica.

Brian,
For me the wake up moment came the year Stewart and Edwards were battling each other. They ended up tied in points (Stewart won by tie-breaker). That happened because they kept finishing 1-2 for the last few races. And that happened because all the other drivers that were mathematically out of it moved out of the way so just the two of them could race. Since then it’s only gotten worse.

Yep, it was last year when Larson just mysteriously stalled out. Usually there’s one driver allowed to be periodically seen in the same screen shot as the Final Four, so long as they have “handling issues” or something along those lines late in Game 7. Of course, to give the appearance that the non-Chasers have as much right to go all out.
Go back to the first year of this nonsense when Newman and Hamlin made it to Homestead and were in the Top 5 pretty much instantly at the start of the race, funny considering they would have had trouble running in the Top 5 in a 5 car race for most of that season. I think it was the same race when Jeff Gordon inexplicably pitted while running 2nd when a late caution came out. A couple days later, Alan Gustafson felt compelled to put out the equivalent of a hostage video to give some half-hearted explanation.