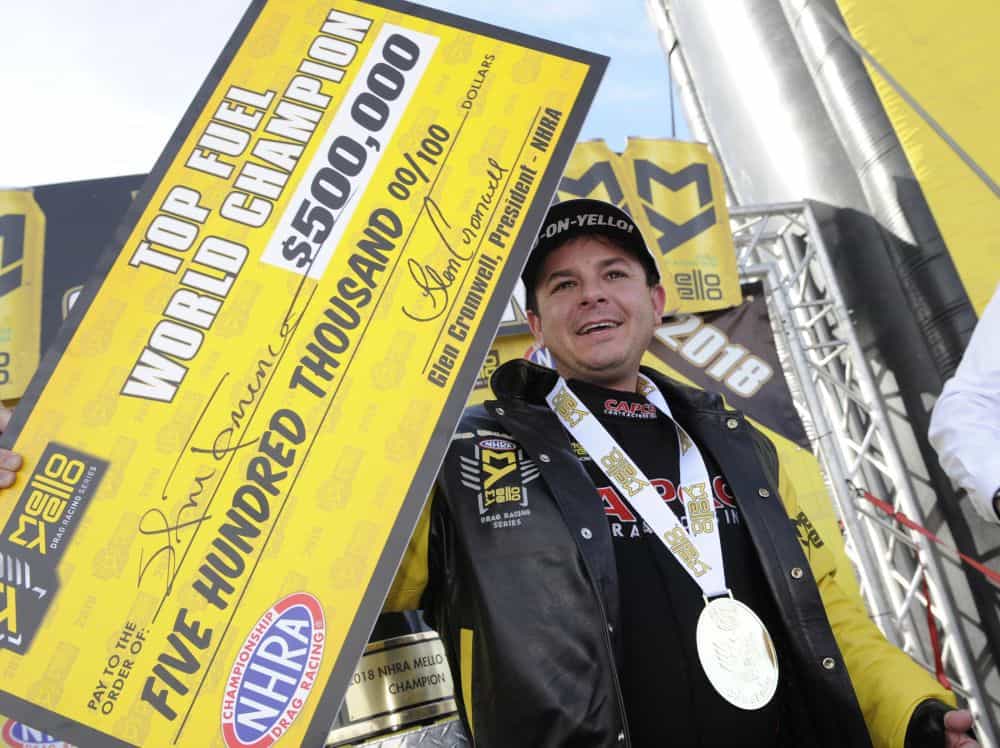 There’s still one more race left in the 2018 Mello Yello Series season, but one championship has already been awarded and a second is really just a matter of the driver just showing up in Pomona.

Steve Torrence collected his Top Fuel championship trophy in Las Vegas, while Tanner Gray just needs to show up to get his Pro Stock championship. The other two will come down to Pomona to be decided, although Robert Hight will have some work to do to overtake J.R. Todd.

But the question is: if two championship battles are already over before we even get to the final race, does the Countdown, and the points reset that goes along with it, really make the competition for the championship much more exciting? In Torrence’s case, he was going to win it either way. He finished the regular season ahead by a sizable margin, and when the Countdown started, the question was whether he would prevail or would he lose it in the final stretch like he did last year.

Torrence was very outspoken in his criticism of the format last season. He looked to be heading for a championship and had more wins than anyone else during the season, but a crash midway through the six-race Countdown and the subsequent scramble to finish in a backup car cost him as his performance faltered. Brittany Force, meanwhile, had an average regular season, but her team found the combination and ran strong through those final six races — winning the championship was the result.

That’s not to say Force didn’t deserve the title. Under the rules and the format in place, her team played the game the best. She should have won the championship. This sounds like a NASCAR argument, doesn’t it?

Makes you wonder if what happened to Torrence last year has played a role in the fact that he’s won all five Countdown races so far, leaving no doubt and no room for anyone else to even make a run at it. Surely, it plays a huge role if determination alone can propel a race car.

Gray was also very likely, like Torrence, to have won the championship either way, with or without the Countdown.

Funny Car is the opposite story, though. Without the Countdown, there likely wouldn’t be a battle between J.R. Todd and Robert Hight. It would instead likely be Courtney Force working her way toward her first title. Force ran strong through the spring and summer months, but her team has slipped just a bit over the last couple of months. Just a little bit is all it takes when a sizable points lead evaporates down to just 20 points with six races left. That, and a couple of other teams gelling at the right time or maybe even focused their season on that final six-race run.

The result is two other drivers going into the final race to battle it out while Force looks on from sixth place. That’s even worse than what Torrence endured last season. He was at least still in the fight at Pomona.

The original question was does the Countdown format make for a more exciting championship race? In Top Fuel and Pro Stock, this year at least, not really because Torrence and Gray are just that good and their teams just that strong. In Funny Car, maybe — this year at Courtney Force’s expense.

Here’s one more thing to consider in the argument for or against a Countdown. The E3 Spark Plugs Pro Mod championship came down to the final race in Las Vegas as a contest between two drivers, Rickie Smith and eventual champion Mike Janis. Other drivers were still in contention as late as the second to last event. It turned out to be an exciting championship run to the finish. That was without a Countdown and, instead, an old-fashioned season-long points system.

Answer: By letting them play out without any gimmicks. Brian’s “brilliant” ideas are well accepted and working out real well. Aren’t they?

I had pretty much the same answer Don…

How do you MAKE championships exciting?

You don’t. They have to happen organically, on their own, without any manipulation. And when it happens it’s awesome.