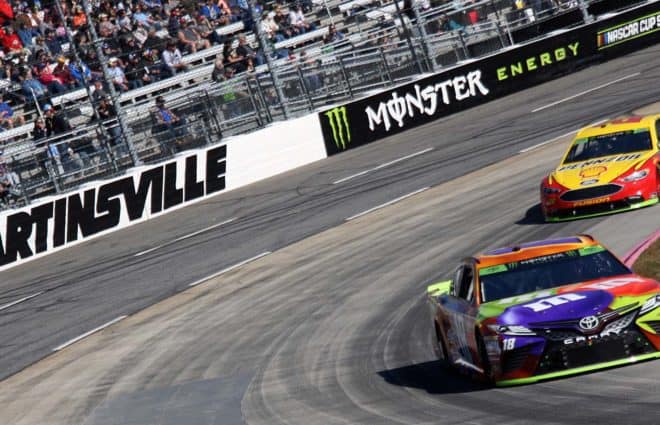 On Sunday (Oct. 28), the Monster Energy NASCAR Cup Series kicked off the Round of Eight with the First Data 500.

The second of two trips to Martinsville, Virginia resulted in an ending that sets up a storyline as the series heads to Texas. Joey Logano and Martin Truex Jr. put on a show for the fans in attendance which ended with Logano in victory lane and Truex stating “He may have won the battle, but he ain’t winning the damn war.”

Logano’s victory puts Truex, Kevin Harvick, and Kyle Busch in a good situation as the series heads to Texas but for the remaining four drivers, the road to Homestead will be a little rough unless they can pull a victory either at Texas or at ISM Raceway.

How did Sunday’s wild finish at Martinsville shake up the list below? Find out with this week’s Monster Energy NASCAR Cup Series Power Rankings.

Kyle Busch is doing exactly what he needs to do to make it to Homestead. He’s keeping it consistent, clean and content, and after Logano’s victory on Sunday, that’s all he’ll need to do the next two races.

Busch is like a snake in this situation, waiting for a chance to attack at any moment. This move could land him in Victory Lane after Homestead is over with him lifting his second championship trophy.

Sunday was a struggle for the No. 4 team but much like Busch, Harvick really just needs to keep it consistent and hope Logano is the only driver not in the Big Three pick up the victory in the next two weeks. It could shape up well for Harvick, who dominated Texas last fall.

Yesterday @MartinsvilleSwy was disappointing for sure.. After having a teammate win in the spring we went the same direction as them and felt good about it on Saturday. Yesterday that didn’t work out at all.
Absolutely can’t wait for @TXMotorSpeedway and @ISMRaceway 👊🏼👊🏼

Logano and his crew became the first team to punch their ticket to Homestead with a victory on Sunday at Martinsville. Logano did what he had to do even though it ruffled some feathers.

Drivers always want more victories and, when it comes down to it, Elliott probably will need at least one more to punch his ticket to Homestead. A 31-point deficit sits between him pointing his way in and missing the Championship 4 if he doesn’t win a race, but it’s not completely irrational to think that this team could still make it happen.

Truex needs some luck on his side sometime in this late part of the season.

He ran out of fuel at Watkins Glen, got wrecked at Bristol, Charlotte and Martinsville and just hasn’t had the speed in the rest of those races to result in anything remotely close to victory lane. Those points he tallied during the regular season saved him in the Round of 12 and could very well put him in the Championship 4, but the No. 78 team is going to need to show us he can win again in order for us to begin thinking of a repeat.

"He may have won the battle, but he ain't winning the damn war."

This race was great for Kurt Busch. He almost finished inside the top five, but a sixth-place finish isn’t anything to complain about. Now Busch is 25 points outside the cut-off line and needs some luck to go his way at Texas and ISM Raceway.

Solid playoff performance! We have to dig deeper! Who’s with me?! #KB41
Thank you @MonsterEnergy @Haas_Automation @FordPerformance pic.twitter.com/6blTdX4IAZ

The Cinderella story is against the wall after Martinsville. The fact that Logano won on Sunday hurt the chances of Almirola making the Championship 4 as he enters Texas 50 points in the hole. An 11th-place finish may have moved him along in the previous rounds, but only the best are going to make it to the Championship 4.

In order for Almirola to make it to Homestead with a shot at the title, Almirola will need to pick up career victory No. 3.

Frustrating. Coming into today, I thought we had a really good @SmithfieldBrand Ford Fusion and a shot at a win, but for some reason, we were just off. On to Texas.#SmithfieldRacing pic.twitter.com/AuajVYSX4D

Clint Bowyer is in a similar hole to that of teammate Almirola and his finish Sunday didn’t really help him. He was the worst finishing playoff driver in Sunday’s race which has to be disappointing for the driver who punched his ticket to the playoffs with a victory at Martinsville in the spring. A 42-point margin puts him about a race and a few stage points behind.

Love the challenges of Short Tracks. However, didn’t enjoy the ass kicking @MartinsvilleSwy gave me today. Missed it badly!!! Super disappointed but will be ready to give it our all for 3 more.

After getting eliminated from the playoffs after the Round of 12, Keselowski is looking to win his own war. Jimmie Johnson stole the victory from Keselowski in 2015 as a non-playoff driver while Keselowski was a playoff driver at the time.

On Sunday, Keselowski will look to do that to someone else in the field. Now that his teammate is locked into the Championship 4, he could play a part in who battles at Homestead for the championship.

super thankful to the #2crew for a great car, especially on the short runs. We will keep pushing to add at least one more win before the season is over. 😊👍🏻

So close to continuing a streak that has seen Hamlin win at least one race every season since his rookie year in 2006.

But close only counts in horseshoes and hand grenades. Hamlin could have really benefited from the ending had Logano and Truex taken each other out before crossing the finish line. Had that finish line been like the one at Talladega, Hamlin would’ve probably been in Victory Lane instead of Logano.

Christian Koelle returns to Frontstretch in 2020 as the photo editor at Frontstretch. He will continue to contribute content in the ARCA Menards Series, Sioux Chief Challenge, and ARCA East & West Series. He is also engaged and will be getting married during the 2020 NASCAR off-season. His favorite tracks on the circuit include Barber Motorsports Park, Iowa Speedway, Martinsville Speedway, Talladega Superspeedway, Fairgrounds Speedway Nashville, and Bristol Motor Speedway. During the season, Christian also spends time as a photographer with multiple other outlets shooting Monster Energy AMA Supercross, Minor League & Major League Baseball, and NCAA Football.
@KoelleChristian
Previous The Frontstretch 5: Closest Finishes Ever
Next Cole Whitt Unsure of Future, Wants to Spend More Time with Family 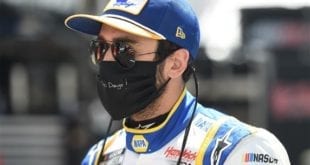