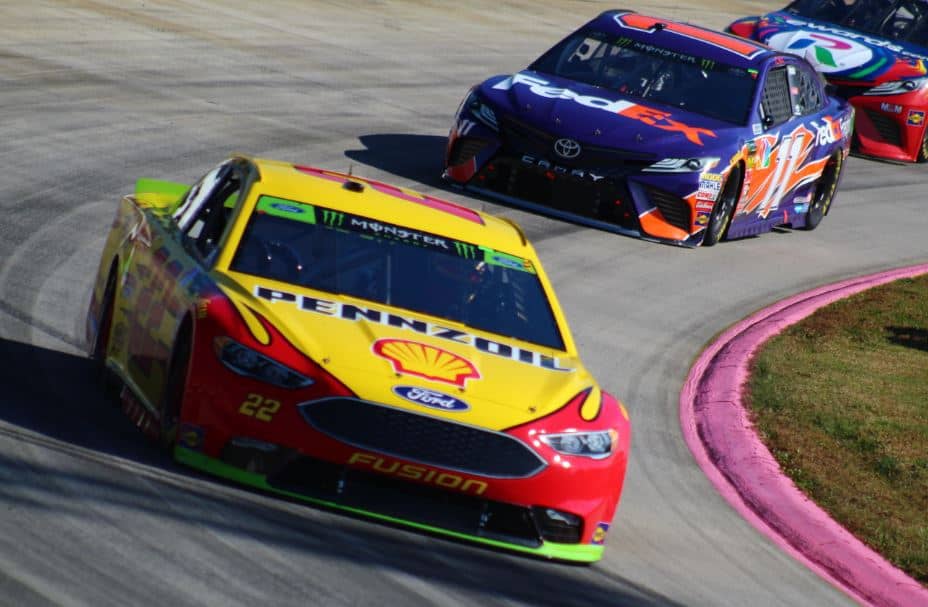 Can Joey Logano steal a championship?

Joey Logano had about as bad a 2017 as he could even with winning a race.

That race — the spring Monster Energy NASCAR Cup Series race at Richmond Raceway — was mired by a post-race inspection failure that made the win not count toward playoff consideration. In the 27 races in 2017 following that encumbered victory, Logano had just four top-five finishes, and outside for leading 59 laps each at both Talladega Superspeedway and Martinsville Speedway, only led 18 laps otherwise the rest of the season.

This season, Logano has quietly improved dramatically. His average finish has jumped from 15th to 10th, and he has 800 laps led on the season. I write “quietly” because his only win before this past weekend was at the wild card Talladega in late April. Teammate Brad Keselowski has been arguably better this year, especially at the start of the playoffs. Even Ryan Blaney was able to take a pretty memorable win in the inaugural Charlotte Motor Speedway ROVAL race.

But Logano has ended up stealing the first spot in the Championship 4 at Homestead-Miami Speedway because he gamed the system, in a sense. He had 15 playoff points entering this round, only sixth best among the eight drivers still in the playoffs. But at the end of the day, winning is still the most important factor in this format. And just hanging through the first two rounds and then winning a race in this round is really all you need to do to make it to Homestead.

Logano’s move against Martin Truex Jr. to win at Martinsville was definitely controversial. But nobody should be shocked at how aggressive Logano can be (just ask Matt Kenseth), and this sport exploded because of stuff like that. Bumping somebody out of the way and not straight up wrecking them and ruining their day is perfectly acceptable in NASCAR. If it wasn’t, Dale Earnhardt would not be in the Hall of Fame. And I doubt we see any form of retribution, unless Truex wins Texas Motor Speedway and both have nothing to lose at ISM Raceway. But come Homestead, I’m sure NASCAR is going to make sure there isn’t more controversy on this matter between the two.

What will INDYCAR do to address safety concerns in the future?

Last week, IndyCar Series driver Robert Wickens confirmed on social media that he is paraplegic after a horrific wreck at Pocono Raceway in August.

There have been and will be a lot of questions about how IndyCar will improve safety in response to this incident. In general, IndyCar has had some problems recently when it comes to safety; between NASCAR, IndyCar and Formula 1, IndyCar has had two of the three most recent deaths and have had other serious injuries to its drivers, including James Hinchcliffe.

Probably the safest thing IndyCar can do right now as a band-aid would be to stop racing at ovals longer than Gateway Motorsports Park. It’s generally frightening to watch these races happen now, and while I know the series would need to make an exception for the Indianapolis 500, it does not have to race at Texas or Pocono. The speeds these cars can get to at these places is just plain scary, and it’s a miracle that the series hasn’t had more problems than it has at these racetracks.

There are plenty of alternative ovals IndyCar can visit. It has a contract with Texas, but track owner Speedway Motorsports Inc. has a pretty good option for a replacement: New Hampshire Motor Speedway. It’s flat, speeds would probably be relatively low and these cars have enough horsepower where they can actually make passes on the straightaway.

As far as Pocono goes, it sucks for the Mattioli family, but that track should not host major open wheel races. Richmond Raceway has hosted IndyCar races in the past, Martinsville could be an interesting experiment, maybe even something radical like a revived Rockingham Speedway.

But these would still just be band-aids. The biggest thing that needs to change is that the cars need a closed cockpits, but I’m sure there are other changes that should happen, such as changes to the catchfence that led to Wickens’ injury.

Will Denny Hamlin and Jimmie Johnson both go winless for the first time in their careers?

Both Denny Hamlin and Jimmie Johnson have never been losers in their full-time Cup careers. But with just three races to go in the season, both are running out of time to change that for 2018.

For Johnson, there’s really not been a lot of hope this year. He barely made the playoffs, and he now has a lame duck crew chief. He’s only led 29 laps in 2018, by far his lowest tally since his rookie season in Cup.

Hamlin had a strong start to the year, being as high as sixth in points after the Charlotte race in May. But the Virginia driver has struggled with inconsistency since the start of the summer. A third at Indianapolis Motor Speedway was followed up by a 32nd at Las Vegas Motor Speedway. In mid-summer, he went on a five-race stretch where his only top-10 finish was a 10th at Pocono.

Both drivers are going to race as hard as they can these next three races, but if either are going to win before the end of the year, the smart money is on Hamlin. He at least has speed, unlike Johnson.

Will Kevin Harvick continue to win at Texas, or will Truex reverse course in the Lone Star State?

Kevin Harvick will enter Texas this weekend needing to win to avoid potentially being on the Homestead bubble at ISM Raceway, and he’s going to have a solid shot there if recent history repeats itself.

Harvick is the defending race winner, having won this race on his way to being in the Championship 4 last year. Harvick followed that up with a second in the spring race. Even if he doesn’t win this week, a good points day should put him in good position to advance at… where’s next week again? Oh yeah, ISM. Which is equivalent to Harvick’s own personal playground at this point.

Harvick’s teammate Kurt Busch may not win on Sunday, but he’s a good pick for fantasy because he has solid runs at Texas. In the last six Cup races there, he has no top-five finishes, but he does have five top-10 finishes, winning the last two pole.

Finally, there’s Truex. He’s never met a mile-and-a-half track that he can’t win at, but Texas has been a challenge. Truex has led 49 or more laps at Texas six times, but he hasn’t won there. He probably had the best car for the majority of last fall’s race, but Harvick was able to out-duel him in the latter stages to win it. After the Logano incident last week, it wouldn’t be a surprise for Truex to either rebound with a win or continue his run of bad luck at Texas. There’s no middle ground.

So first you say Logano stole his way in and then you counter that by saying he “gamed” the system. Well which is it? You can’t have it both ways. Do we hate the player or hate the system? Or maybe we hate both? Logano didn’t steal anything, he just did what he was supposed to do. NASCAR invented this wheel so why drag out the crying towel Michael when Logano plays the system sucessfully?

Truex has been around 15 seasons and has 19 career wins. 16 of those wins have come in the last 3 through some sort of ” miracle ” car it’s being rumored. Logan won that race last week the way all the great drivers have always raced the short tracks. I would love to see one of the lowest 4 cars win at Texas this week. That would really make for some very nervous too 3 drivers at Phoenix.

For whatever reason, I have always considered IndyCar as having the wine with lunch fans, while Nascar has the wine for lunch fans. Given the recent deaths in IndyCar, it is sorta odd to think IndyCar fans might appear more bloodthirsty, rather than more genteel, than Nascar fans.

Nascar has dropped the ball by allowing dirty driving to top sportsmanship., maybe for better TV ratings. For young kids to see these values is a disgrace. For a “sport” to fly the American flag proudly yet exhibit the lowest values is a dichotomy and they have been slowly losing at least one longtime fan I know, me.