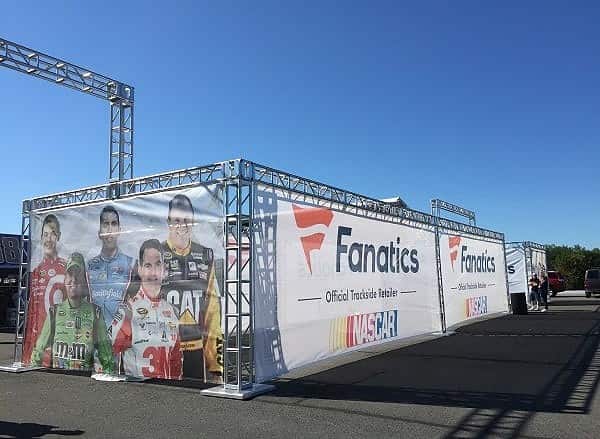 Per Sports Business Daily, Fanatics will terminate their NASCAR trackside deal following the conclusion of 2018. Fanatics has been responsible for the at-track displays for NASCAR races since 2015 including the tents and souvenir haulers. The two parties signed a 10-year deal that should’ve run through 2024 but after today’s news, it’ll come to an early end.

Per Sports Business Daily, Fanatics declined to comment on the deal while NASCAR’s new President Steve Phelps released a statement to THE DAILY writing, “In collaboration with teams and tracks, we are in the process of finalizing a plan for a new trackside merchandise model for 2019 that will serve and engage fans at racetracks across the country.

“Although Fanatics has decided to discontinue its trackside relationship, we look forward to continuing our long-term e-commerce partnership as they continue to enhance the ever-growing online and mobile platforms for many more years.”

Fanatics kicked off something never seen before with the tent system for NASCAR that was greeted by different reactions by NASCAR fans. The negative reactions out-weighed the good, pushing Fanatics to return to the hauler delivery system.

Attendance issues have impacted the original financial projections set by Fanatics forcing the organization to restructure the deal with no success. Following the failure to restructure, they decided to end the deal.

As noted above, NASCAR is working with its teams and tracks to deliver the best merchandise delivery system possible for 2019 and beyond. Despite ending the at-track delivery, Fanatics will still oversee NASCAR Shop which it has done since 2003.

Christian Koelle returns to Frontstretch in 2020 as the photo editor at Frontstretch. He will continue to contribute content in the ARCA Menards Series, Sioux Chief Challenge, and ARCA East & West Series. He is also engaged and will be getting married during the 2020 NASCAR off-season. His favorite tracks on the circuit include Barber Motorsports Park, Iowa Speedway, Martinsville Speedway, Talladega Superspeedway, Fairgrounds Speedway Nashville, and Bristol Motor Speedway. During the season, Christian also spends time as a photographer with multiple other outlets shooting Monster Energy AMA Supercross, Minor League & Major League Baseball, and NCAA Football.
@KoelleChristian
Previous Gray Gaulding to Pilot Full-Time XFINITY Entry in 2019
Next Ryan Truex Sweeps XFINITY Practices at Texas

NASCAR Mailbox: What Benefit Have Sunday Doubleheaders Been to Xfinity and Trucks?