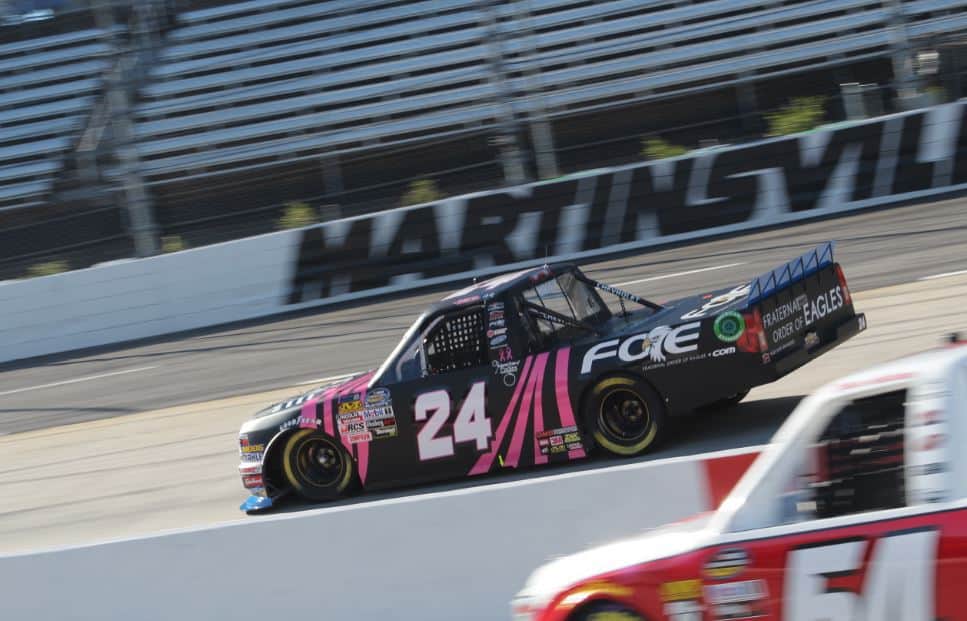 The Jaws theme was playing in the background as Justin Haley began creeping closer and closer to the No. 4 of Todd Gilliland. All he needed was for Gilliland to make a mistake, and that was just what happened.

Gilliland ran out of fuel on the backstretch and Haley went passed the No. 4 and rocketed to the checkered flag capitalizing on another driver’s mistake again.

Ben Rhodes finished the race in second while Brett Moffitt, Gilliland and Austin Hill rounded out the top five.

Unofficial Results for the JAGS Metal 350 at Texas Motor Speedway

The race kicked off with Johnny Sauter leading the field to the green for the first time as the pole sitter since 2016. Sauter had tallied two previous first-place starts at Charlotte earlier this year and Kentucky in 2017 (both were awarded poles after qualifying was canceled). The night was looking to go the same direction as Martinsville until a punctured tire forced the No. 21 team to pit early.

The beginning of the race was terrible for DGR-Crosley Racing. Bo LeMastus made hard contact with the wall and, just a few laps later, David Gilliland lost a right front tire putting the No. 17 into the wall. Both would go behind the wall, handing out a 32nd-place finish for LeMastus and a 30th place finish for Gilliland.

Meanwhile, Haley and Sheldon Creed battled for the lead with both leading a handful of laps. Haley would be in the lead at the right time as Codie Rohrbaugh spun, bringing the caution out with less than five laps remaining in the first stage. NASCAR would end the stage under yellow, handing Haley the stage victory.

GMS Racing teammates Haley and Creed had a good battle to end the first stage but that came to an end during the first round of pit stops. Creed slid a little too far inside his box and had to back up to get around the No. 35 of Brennan Poole. The extra time cost Creed seven spots on pit road but that was just the beginning of a bad night for the rookie.

Myatt Snider stayed out along with six other drivers during the caution and gained the lead. Friesen, Enfingera andothers took two tires, including Haley, but it didn’t mean much as Snider ut on a show during the second stage.

On lap 40, Joe Nemechek tapped Cory Roper as they were three wide, causing the No. 04 to spin. Roper tagged Tyler Young and the two made hard contact with the wall. Johnny Sauter looked to avoid the accident but wound up getting hit by Tanner Thorson. Gragson also attempted to make it through but made some contact with Sauter’s left side door. Gragson and Sauter both continued on in the race while Roper’s night ended early.

Creed’s night went from bad-to-worse when he spun in Turn 2 and back it into the wall. A few laps later, Creed spun again, knocking one of the Texas Motor Speedway SAFER barrier toppers onto the track. NASCAR couldn’t get it cleaned up in time for stage two to end under green, allowing Snider to pick up the stage win under caution.

Kyle Busch Motorsports posed a significant challenge in the final stage. Todd Gilliland and Harrison Burton brought the field to green with Gilliland picking up the lead. Friesen made the pass on Burton for second, setting him up for a good shot at his first career victory, pending he had a mistake-free final pit stop.

The complete opposite happened as Friesen and Gilliland came down pit road on lap 115. The speeding police nabbed the No. 52 for too fast entering put road. A rocket pit stop by Gilliland’s crew reeled in a good chunk of time but the early stop came back to bite them. Gilliland’s wide lead began dwindling, much like the amount of fuel in his fuel tank.

As the tank became completely empty, Gilliland lost power, surrendering the lead and victory to Haley on the final lap.

The NASCAR Camping World Truck Series has two races remaining on the schedule and one race remaining in the Round of 6. The series heads to ISM Raceway in Phoenix, Arizona. Sauter and Haley are the only drivers who have punched their ticket to Homestead.

Moffitt has a 22 point advantage over the cutline while Gragson’s cushion matches his car number at 18. Enfinger is 18 out while Crafton is 23 out.