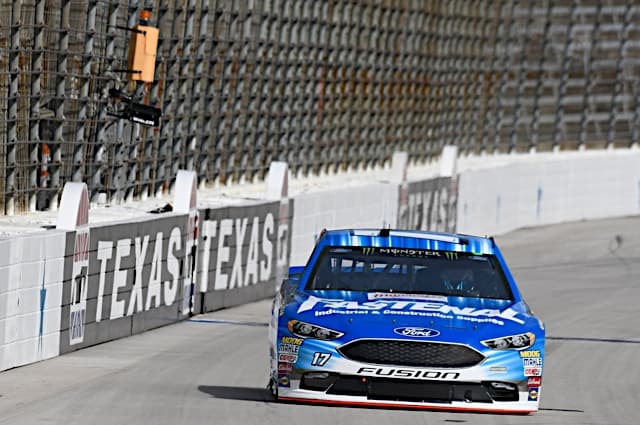 Aric Almirola topped the charts with a top speed of 193.854 mph over Kyle Busch in second. Clint Bowyer has a lot of points to make up in order to make it Miami without a win was third in Practice Two. Brad Keselowski had the fastest average speed in the session had the fourth fastest single lap speed, and Denny Hamlin was fifth.

Kurt Busch comes into the weekend 25 points below the cut line was sixth ahead of Kyle Larson and Kevin Harvick in seventh and eighth. Joey Logano was ninth with Martin Truex Jr. rounding out the top 10.

With Qualifying for the AAA Texas 500 in the books, all Monster Energy NASCAR Cup Series teams turned their attention to race runs in the second and third practice sessions.

The wind was gusting at around 18 mph in the opposite direction that teams anticipate the wind to blow tomorrow for the race, so it was hard for the teams to properly measure the speed of their cars as a wind of that high of velocity surly throws off the handling of these MENCS race cars.

Polesitter Ryan Blaney could do no better than 13th fastest speed, while Chase Elliott struggled with handling on the front of his No. 9 car and finished the session in 19th.

In final practice, MENCS teams switched their attention to short-run tire wear in preparation for Sunday. Feedback was that new tires brought in for this one-year-old revamped Texas race surface had little wear after 20-lap runs. All of this information will be crucial for strategy decisions as the laps wind down in the AAA Texas 500.

Ricky Stenhouse Jr. was the fastest in final practice ahead of Kurt Busch in second. Martin Truex Jr. was third fastest ahead of Paul Menard in fourth, who had the fastest time for most of final practice. Ryan Blaney was fifth fastest. Erik Jones was sixth, Kevin Harvick seventh. Kyle Busch was eighth fastest with Aric Almirola not far behind, and Daniel Suarez rounded out the top-10.

All eyes are on the No. 4 of Kevin Harvick and the no. 18 Kyle Busch as they were the fastest two cars in the five, ten, and fifteen lap averages in final practice. Kyle Busch has been one of the most consistently fast cars all season long, so his pace in practice is no surprise. With Texas being a similar track to Atlanta, a race that Kevin Harvick dominated in the spring, look out for that Stewart-Haas car on Sunday.