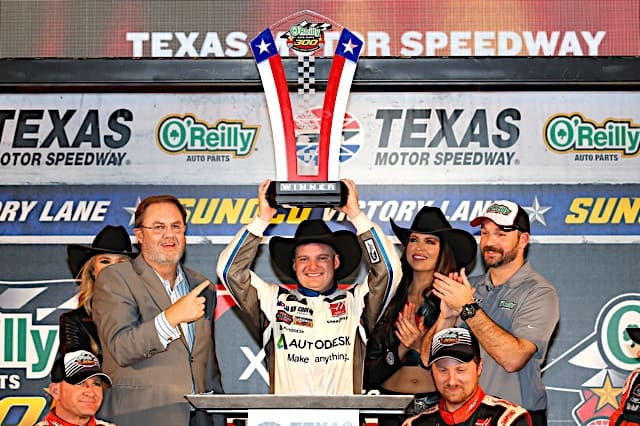 After a wild race where 13 cautions flew, setting an XFINITY Series record at Texas Motor Speedway, Cole Custer took the lead on the final lap to win the O’Reilly Auto Parts 300, his first win of the season and second in his NXS career.

Tyler Reddick had the lead on the final lap but was muscled back to finish second. Austin Cindric finished third ahead of John Hunter Nemecheck and Justin Allgaier in fourth and fifth, respectively.

The series took to Texas for the second race of three in the Round of 8 semi-finals. With only one race left before the final round in Homestead-Miami, teams were under pressure to win and punch their ticket to a chance to take the 2018 NXS crown.

Brandon Jones bounced back from a spin earlier in the race to finish sixth, while Matt Tifft came home in seventh. Elliot Sadler restarted with two to go in third but fell back to finish eighth. Spencer Gallagher ended his day in ninth, and Daniel Hemric found a way to manage a tenth-place finish after his late-race spin with Richard Childress Racing teammate Shane Lee, who finished 23rd.

The wild stage one began in Turn 1 on Lap 1. Pre-race, pole-sitter Christopher Bell talked about how he wants to drive cautiously to ensure he finishes the race following his first-lap wreck last time out at Kansas. Well, he did not walk the walk as he spun around on the inside through Turns 1 and 2, bringing out another opening-lap caution.

Hemric was able to keep control of his car on the inside of the third restart following the Ryan Sieg–Ryan Truex crash to take the lead from Reddick, proving to be one of the fastest cars on the track as he was able to stretch his lead to over a second just four laps after the restart. Hemric went on to lock up the stage and playoff points by winning Stage One.

Bell also showed his speed early on, as he was able to bounce back from 32nd following his early spin to finish stage one in fourth.

As Reddick approached lapped traffic in stage two, second-place Custer gained ground. On lap 81, Reddick was stuck behind lapped car Joey Gase. Custer got to the inside of Reddick and instead of backing out and letting Custer into the lead, the No. 9 got into the back of the slow lapped car of Gase, sending him spinning and bringing out the fourth caution. The loose conditions and lapped cars did not mix well for the leaders all day long.

A wild restart ensued with eight laps to go in stage two, as Allgaier forced it three wide on the front stretch, slowing Reddick’s momentum and allowing Custer to clear the JR Motorsports teammates to win stage two.

Bell was back in the lead to start the final stage and this time chose to start the race on the outside. Once again there was a first-lap spin, just not by Bell though. Brandon Jones and Michael Annett got loose and spun in the first two corners to bring out another caution.

Bell was able to stabilize a lead through the middle part of the final stage but a caution brought the field back together. Jones took no tires on the pit stop and Hemric beat Bell out of pit road, putting the No. 20 back to third. On the ensuing restart, Bell got loose again and fell back into the pack where he was then bumped by Cindric, sending Bell spinning up into the wall, ending his day and landing a significant blow to Bell’s championship hopes.

As the cautions continued to fly, Hemric and Allgaier battled hard for the lead in an exciting battle between two playoff contenders. Nemechek soon joined the fray and got past Hemric with just more than 25 laps to go and tried to chase Allgaier down.

Teams were all concerned about fuel, every car in the top 10 besides Custer, Reddick and Sadler were around two laps short when the field took the green flag on the third to last restart. Nemechek was told that he was good to go on fuel despite the fact that he pitted on the same lap as the No. 7 and No. 21. Nemechek was all over the back of Allgaier’s car and eventually took the lead with 17 laps to go as Allgaier battled lap traffic and saved fuel.

But then it got even more interesting. Ryan Reed spun on the backstretch bringing out the 12th caution. Nemechek, Allgaier, Hemric, Tifft and many others pitted for four fresh tires and fuel to make it to the end. The race for the lead was inherited by Custer, Reddick, Cindric, Sadler and Jones ahead of the previous leaders. Nemechek was able to fly up to third behind Reddick and Custer. Lee was side by side with Hemric when the No. 3 got loose and drifted up into Hemric, spinning both of them out. Hemric flat-spotted his tires, hurting his race win/playoff chances.

On the final restart, Reddick pulled away to the lead and took the white flag. Custer chased Reddick down to get side-by-side down the backstretch. The two cars slammed into each other on the backstretch and Custer came away with the advantage to clinch his spot in Miami.

With Custer punching his ticket to Miami, there are three spots left to decide as the NASCAR Xfinity Series moves on to ISM Raceway in Phoenix next weekend. As of now, Reddick, Elliott Sadler, and Hemric hold the last three advance spots. Allgaier and Tifft need good points-paying days to be able to advance on points. Bell and Cindric will most likely need to win in Phoenix to keep their championship hopes alive.

Having read this I believed it was rather enlightening.
I appreciate you finding the time and energy to put this content together.

I once again find myself personally spending a significant amount of time both reading and commenting.
But so what, it was still worth it!