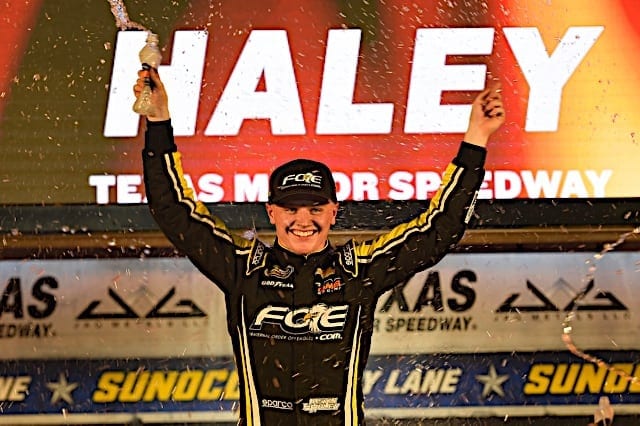 In a Nutshell: Justin Haley took advantage of Todd Gilliland‘s empty fuel tank to score his third victory of the season Friday night at Texas Motor Speedway. The driver of the No. 24 Chevrolet beat Ben Rhodes to the checkered flag in the JAG Metals 350. Brett Moffitt, Gilliland and Austin Hill rounded out the top five.

Speechless. This is an opportunity of a lifetime to run for a Championship with @GMSRacingLLC. My 24 guys are unbelievable, we stick with eachother no matter what. They gave me a hotrod tonight & I’m so thankful to be apart of the team We’ve got momentum, the Darkhorse is coming.

Harrison Burton, who made his sixth start this season, finished sixth, followed by Jesse Little. Stewart Friesen, Matt Crafton and Noah Gragson rounded out the top 10.

Who Should Have Won: Friesen led 12 laps and appeared poised to score that elusive first career win, but a speeding penalty sealed the deal and gave Gilliland the lead and clean air. Then, the driver of the No. 4 Toyota, who led a race-high 60 laps, simply needed to hit his marks and cruise to the checkered flag. But it was Haley, who led 33 laps on the night, that was there to capitalize when Gilliland ran out of fuel and coasted to a fourth-place finish.

Johnny Sauter, who locked himself into the Championship 4 following a victory at Martinsville Speedway last weekend, started on the pole after leading the opening practice session at Texas Motor Speedway. He led just the first lap before giving up the top spot, a position he never managed to regain, despite a dominant run at the mile-and-a-half oval in June.

On the restart after the first caution, Sauter dropped back from inside the top five to outside the top 20 before taking his truck to pit road. The flat right-rear tire cost the 2016 champion a lap, which he quickly regained with a free pass when the second yellow flew.

Just a handful of laps after the free pass, Sauter was tagged by Bayley Currey as the pair attempted to avoid a spinning Codie Rohrbaugh. Shortly after stage two began, Sauter and Gragson got together when Cory Roper and Tyler Young tangled. The left side damage on the No. 21 Chevrolet led to an extended stop on pit road but Sauter was able to continue.

Despite facing multiple issues on the day, Sauter still managed to finish 11th as the last driver on the lead lap.

As the laps wound down on Friday night’s race, Gilliland held a more than five-second lead over the field and appeared to be cruising to the win, but a late-race pit stop for just one can of fuel turned out to be the move that doomed the rookie, who saw his first career win slip through his fingers on the white flag lap once again.

“I didn’t even know that we were close on fuel at all,” a dejected Gilliland said after the race. “That’s what got us out in the lead and ultimately took our race. I definitely didn’t know there was anything happening.”

For Gilliland, it wasn’t the first issue he had on Friday. He hit the wall in qualifying and was forced to start at the back of the pack after the team made unapproved adjustments.

“I’m incredibly disappointed, upset with myself and I still feel like we could have been faster if I didn’t wreck in qualifying,” he explained. “There are so many things. We win and lose as a team. I’m super proud to be in that position and to be fighting for wins every now and then, but I feel like we’re right on the verge of being a competitor every week and I feel like once we get to that amount of speed the wins will keep coming easier.

“Just heartbreak and kind of disbelief. You’re a half-lap away from my first win at a place like this that’s so special and after everything we did today coming from the back, I felt like we executed a perfect race honestly. It’s over and just need to move on.”

“Obviously KBM has had really fast equipment there in the past. Actually did the Truck race there last year, but you probably didn’t know I was in it because I was in the back,” Gilliland said as he looked ahead to the next race. “Hopefully we’re up front again next weekend and this is really good momentum for us at least heading into these last two weeks. We had a really rough stretch before this, but no doubt in my mind that we can rebound and go win Phoenix.”

Both David and Bo have been released from infield care.

Bummer night. Our guys bust their tails and brought some super fast @ToyotaRacing Tundras. Onto Phoenix…

“Our initial partnership with Texas Motor Speedway and Tony Stewart’s dirt event that began this spring has been incredibly successful and we wanted to expand our presence at the speedway in motorsports,” Vankor founder and CEO Ken Goggans said. “The Vankor 350 NASCAR Gander Outdoors Truck Series race entitlement was a perfect opportunity for us to amplify our story and expand our business. We are looking forward to engaging with the loyal and passionate NASCAR fan base as well as identify new business-to-business partnerships.”

No. of rookies to finish in the top 10: 2; Gilliland, finished fourth; Myatt Snider, finished sixth

Points Update: Johnny Sauter and Justin Haley have locked themselves into the Championship 4. Brett Moffitt currently sits 22 points above the cut line, while Noah Gragson holds an 18-point advantage. Meanwhile, Grant Enfinger and Matt Crafton find themselves on the outside looking in. The two are 18 and 23 points below the cut line, respectively with one race remaining to find their spots in the championship battle.

Up Next: The Camping World Truck Series heads west next Friday night for the second-to-last race of the season at ISM Raceway in Phoenix. Coverage for the Lucas Oil 150 begins at 8:30 p.m. ET on FOX Sports 1; the race can also be heard on your local MRN affiliate or SiriusXM NASCAR Channel 90.