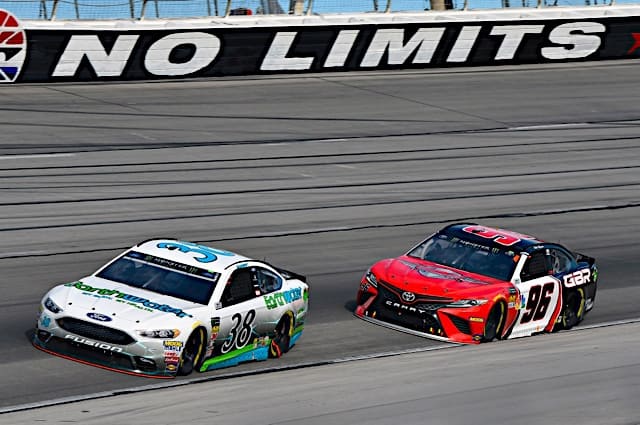 The Monster Energy NASCAR Cup Series race at Texas Motor Speedway was not the most eventful race to say the least, leaving many to question the state of the track and what we can expect in years to come as the pavement wears out. Some believe the 2019 package can improve the racing there and provide more exciting competition.

Is this true, or a major overreaction? Will we see the same racing we have seen the last two seasons? How long will it actually take for Texas to age and develop into a multi-groove racetrack?

Meanwhile, Chase Elliott and Erik Jones both picked up their first career wins this season. This raises the question of who the next driver will be to pull into Victory Lane for the first time.

Will it be a driver who is with a top team like Daniel Suarez, William Byron or Alex Bowman, or could it be somebody with a smaller team that can pull off an upset at a track like Daytona or Talladega?

Q: After seeing this past Sunday’s race at Texas, can next year’s package actually benefit the racing there or was the racing not good because of the track itself? Anthony K., Tampa, FL

A: Next year’s package will not solve any issues with the racing at Texas, unfortunately. Texas has developed into a single-groove track with the repave and it is going to stay that way for a while regardless of the racing package.

Most tracks that go through a repave take a few years to develop multiple grooves, but with Texas, it is going to take even longer. TMS does not have the rough winters that cause the surface to age faster, which happens at other tracks on the schedule.

Take Pocono or Kansas for example. Both are in areas of rough winter weather and both tracks have aged fairly decent since their repaves in 2012.

Next year’s package will improve the racing slightly, but not much. If a track has only one racing groove, changing the package is not going to do much for the on-track product. In fact, the intent of the 2019 package is only to slow the cars down, thereby tightening the field. The racing itself likely won’t be much different other than a potentially more closely packed field.

I am cautiously optimistic that the new package could be beneficial, but at the same time, I am not expecting the racing to look much different at TMS.

Q: Who do you think is going to be the next first-time winner in Cup now that Chase Elliott and Erik Jones have won this season? Aubrey S., Gulfport, MS

A: This is a toss-up between Suarez, Byron or Bowman for me as the next first-time winner in the series. I would throw Daniel Hemric in there for next season as well.

Suarez should still be with a top team next season (if rumors are true) and he will be a threat to get a win or two in what will be his third full season in Cup.

Byron will be with a new crew chief in Chad Knaus and he will have a much better season in his sophomore year. Bowman will be in his second year with Hendrick Motorsports and I expect big things from the young driver.

Hemric will be a rookie in Cup with Richard Childress Racing, taking over the No. 31 for Ryan Newman who moves to Roush-Fenway Racing.

Suarez and Bowman are a bit ahead of the rest on my list, but it won’t be easy.

Suarez seems to have very little luck when things are otherwise going right for him during a race. Being with Joe Gibbs Racing, many expected him to be able to win a race or two and make the playoffs this year. Unfortunately, that has not been the case and it has been a struggle.

Bowman has had a quietly consistent year in 2018. Although he has not come all that close to winning a race, I do expect him to be much closer in 2019 and would not be shocked if he won a race or two, just as his teammate Elliott has done this season in winning three races.

There could be other drivers who might steal a win at Daytona or Talladega that we may be otherwise overlooking. If we look at the current picture though, Suarez, Bowman or Byron will most likely be the next first-time winner in the series.

It is my belief that Christopher Bell will win a race before any of the aforementioned candidates. Somehow he must bust down the door at JGR.