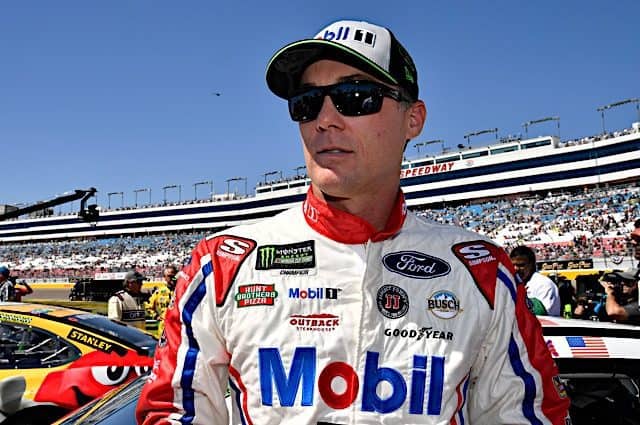 Leadership of NASCAR Penalizes Kevin Harvick Along With Penalizing Itself

NASCAR may have penalized Kevin Harvick Wednesday (Nov. 7) after the AAA Texas 500 but it may also want to look at where it’s pointing the finger. For what seems to be the umpteenth time this season the sport has succeeded at poking itself straight in the eye.

A year marked by negative story after negative story in stock car racing found yet another way to pile on itself. Harvick’s 40-point penalty, assessed after the Texas Motor Speedway race for illegal spoiler modifications leaves his championship hopes in jeopardy. The eight-time winner saw his automatic bid stripped for the season finale at Homestead-Miami Speedway; he’s just three points ahead of the cutline. He’ll also be without crew chief Rodney Childers and car chief Robert Smith for the final two races; his No. 4 team was fined $75,000.

To put it bluntly, officials discovered Harvick cheated and his team did nothing to deny it. Stewart-Haas Racing Vice President of Competition Greg Zipadelli announced they would not appeal.

“We work tirelessly across every inch of our race cars to create speed,” Zipadelli said. “Unfortunately, NASCAR determined we ventured into an area not accommodated by its rulebook.”

Suddenly, the sport’s leading winner this season will finish the year under a black cloud. Harvick’s continued inclusion in the playoffs is a no-win situation, regardless of what happens next. If the driver somehow wins a title? Fans will think he cheated to get there. And if he doesn’t? Arguably the sport’s most dominant team this season won’t be a factor in its championship race.

The announcement itself from NASCAR was the latest in a long line of stumbles. From the very start of the year, when Austin Dillon turned Aric Almirola on the last lap of the Daytona 500, the sport can’t seem to get out of its own way. The frequency of rules violations along with inconsistent penalties applied to them is an overpowering negative storyline.

Officials blowing their whistle have even influenced the most exciting finishes, turning them controversial. The playoffs are the most recent example, defined by silly mistakes that have nothing to do with on-track speed. Pit road speeding, uncontrolled tires, even driving through empty pit boxes, like Martin Truex Jr. did last week, have been the “moments to remember.” More often than not, the fastest car has been hit with these mistakes, handing the victory to an unsuspecting bystander.

Are those really upsets? Sounds more like reasons to make fans upset. How can you sell the house of NASCAR when all your realtors do is point out all the little things wrong with your house? Each week, the focus is on that chip on the bathroom tile or some peeling paint rather than the beauty of the house itself. Perhaps it’s because the racing has been less than beautiful on track, producing a number of forgettable races these playoffs other than Martinsville and the Charlotte ROVAL.

Being on track is only half the battle. The ugliness of inspection is far worse, a failed process which starts the second NASCAR’s garage door opens. Almost weekly, a litany of drivers fail pre-race inspection and have to start their race in the rear. Qualifying has become not a matter of who’s the fastest but who can flip through the Algebra textbook – er, rulebook – in time to out-bamboozle NASCAR officials and get your car onto the grid in time.

Except it seems even when NASCAR catches a culprit, far more slip through the cracks. Harvick joined Erik Jones and Ryan Blaney as rule breakers after Texas Motor Speedway. That means the sport went three-for-three on finding cheaters (only a handful of cars are taken to the sport’s R&D Center for detailed evaluation). It makes you wonder how many other cars were cheating. Five? 10? Keep in mind Jones and Blaney were once part of these playoffs, too.

It’s a long line of law-breaking that puts the sport in the news for all the wrong reasons, a full 60+ hours after the end of the race. Could you imagine watching an NFL game Sunday night and then the score gets reversed on Wednesday? That type of delayed penalty never happens in the stick-and-ball world, golf, curling and pretty much any other organized sport known to man.

Yet it’s the latest in a disturbing pattern of missteps for an organization which remains without true leadership. Consider the NASCAR news stories in just the past week alone….

These cases were each handled by a different branch of NASCAR leadership: President Steve Phelps, Chief Racing Development Officer Steve O’Donnell and Vice President of Competition Scott Miller. All of them are competent, doing their best in a challenging environment. But it’s three people playing defense on three different messages when none of them are fully in charge.

Then again, who really is running NASCAR right now? That continues to be the biggest problem. Any of these issues should have been large enough to bring a sport’s CEO, the Roger Goodell, out of the woodwork to answer to the fans who make the sport possible. But Jim France, while a presence at the track, is nowhere to be found in front of the camera. He still hasn’t given a full press conference while his nephew remains MIA. Brian France has taken a leave of absence as CEO after being charged with a DUI and drug possession in August. That traffic stop in the Hamptons and the mugshot is the last we’ve seen of him. No one knows if, when and how he’ll be back.

In his absence, well-minded people do their best to steer a NASCAR ship that doesn’t appear to have a firm sense of direction or purpose. And for every step forward, the sport seems to take two steps back. An announcement at Martinsville Rick Hendrick had found full-season sponsorship, Ally Financial, to replace departing Lowe’s for Johnson’s No. 48 was counterbalanced by Fanatics bolting. Keep in mind, too, the sport’s reigning championship team in Furniture Row Racing is set to shut down at the end of the season. 2018 could end with Martin Truex Jr. holding the trophy and then jumping to Joe Gibbs Racing next season while his equipment gets auctioned to the highest bidder.

At least Harvick’s team vowed to trudge on, attempting to put the penalty behind them. Labeled a cheater, NASCAR still has given them an opportunity at redemption.

If only they could find a way to redeem themselves.

The author of Bowles-Eye View (Mondays) and Did You Notice? (Wednesdays) Tom spends his time overseeing Frontstretch’s 30 staff members as its majority owner. Based in Philadelphia, Bowles is a two-time Emmy winner in NASCAR television and has worked in racing production with FOX, TNT, and ESPN while appearing on-air for SIRIUS XM Radio and FOX Sports 1's former show, the Crowd Goes Wild.
@NASCARBowles
Previous Nitro Shots: For Your Viewing Pleasure
Next Friday Faceoff: What Do You Expect from the Newly Renovated ISM Raceway?