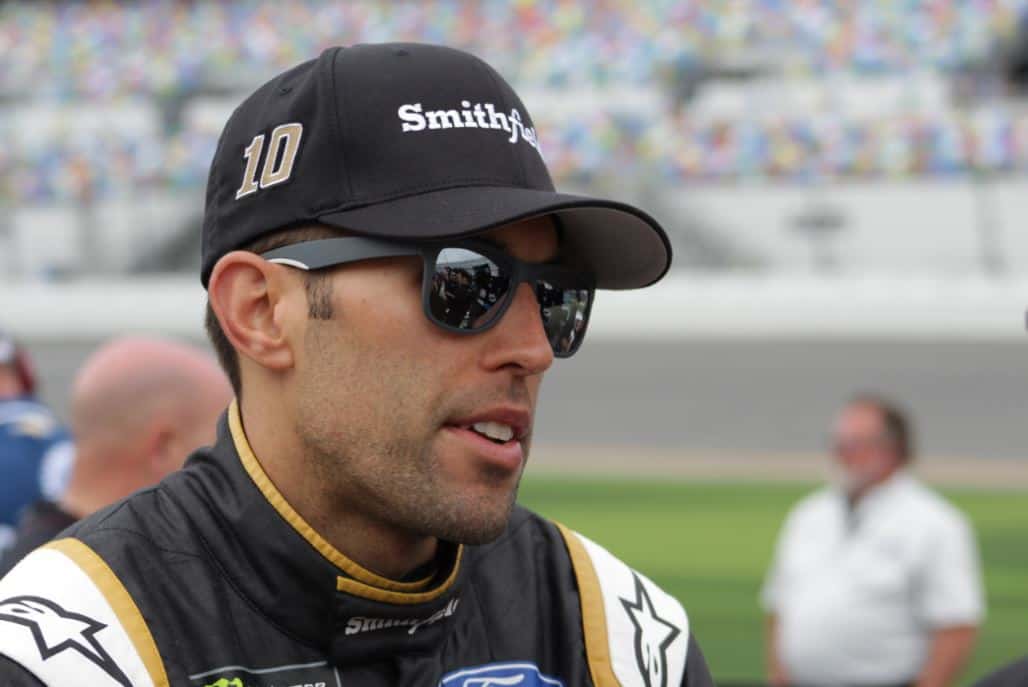 Why is everybody so mad?

But that’s not what made Martin Truex Jr. PO’d after Martinsville Speedway. Or Aric Almirola PO’d after Texas Motor Speedway last weekend. Or Kurt Busch PO’d after his teammate (don’t worry, we’ll circle back to that) passed him for a stage victory. The list goes on and on and on.

Isn’t the goal of racing to, wait for it… win?

The street goes both ways. You choose to race hard, you choose to get raced hard. That’s how it is. And if you don’t like it, to quote Walter from Drake & Josh, TOUGH SQUASH.

Let’s take the examples one by one, shall we?

Truex was displeased with Joey Logano for using the bump-and-run on the No. 78 car at Martinsville on the last lap, in the final two corners, to earn an automatic berth to the Championship 4.

HELLO?! Who in their right mind wouldn’t do whatever it takes to get themselves, their team, their sponsors and their loyal fan bases to the promised land, aka Homestead-Miami Speedway?

Truex can say that “he ain’t winning the damn war,” that he’ll get his revenge and that he’ll make sure Logano doesn’t win the championship. But just because he raced the No. 22 clean for the time leading up to the race-winning move doesn’t give him the go-ahead to say Logano’s move was dirty.

It was a winning one. Stop complaining.

As for Almirola’s gripe with Logano this past weekend, most agree that he was out of line.

If Logano were to have came down on the No. 10’s door (which, by the way, he didn’t), on lap 20 of 267, Almirola’s argument would have some validity. But all bets are off in the final stage, especially with under 20 laps to go. Who cares if he already has a win? That gives him the luxury of putting his competitors in unenviable positions and keeping them out of the Championship 4. He won, you didn’t.

Just because you have a teammate who already has a plethora of playoff points doesn’t mean they’re going to roll over for you. Case in point: Chicagoland Speedway earlier this summer. Busch expressed unhappiness with Kevin Harvick when the No. 4 passed the No. 41 on the outside coming to the stage-ending checkered flag to win a stage and earn a precious playoff point.

Yeah, Harvick was totally in the wrong. Because we have never seen a scenario when one measly point winds up determining who advances to the next round of the playoffs or wins the championship.

…oh wait, we have? ISM Raceway in 2014 when Ryan Newman fenced Kyle Larson for one point, and it worked? 2011 when Tony Stewart won the championship over Carl Edwards via a tiebreaker, something that had never happened in NASCAR history before?

At the risk of sounding like an old man on my soapbox (I’m not, because I’m a 22-year-old millennial, thank you very much), if you’re mad about something, do something about it.

Stewart was known for running his mouth a time or two. One of the many lasting memories I have was at Auto Club Speedway in 2013. Stewart wasn’t pleased with Logano (damn, why does he piss everybody off?) and told the late, great Steve Byrnes four famous words: “I’mma bust his ass.”

And, well, he did! Kind of. Stewart didn’t take crap from nobody, and that’s what made him who he was. Neither did Harvick. Remember Bristol Motor Speedway in 2002 with Greg Biffle? Or Richmond Raceway in 2003 with Ricky Rudd? I can go on and on.

Jeff Gordon didn’t like how Matt Kenseth raced him at Bristol in 2006, so he got out of the car, walked up to Kenseth and pushed him in the chest. Yes, they talked. Yes, things were patched up. But that’s emotion. The stuff that’s cool to see.

Rivalries are great for the sport. I’m not in the camp of any publicity being good publicity (see: Brian France’s arrest), but as long as the talk of the town is about hot tempers that stemmed from an on-track incident, that’s a win in my book.

So you can go ahead and whine about so-and-so racing you too hard, or Joe Schmo cutting you off, or blankedy-blank blocking you. But if you do, just realize they’re doing their job.

I often wonder especially when it is KB who makes remarks about being raced – does he not realize other drivers have fans too? if a driver just rolls over for another how many fans will he have? How many will the sport have? Racing is what the fans come to see and I love when my driver fights hard for every spot no matter what.

In general, one is best served to say nothing when mad; publicly comment only when not mad and when all of the facts are known. I would prefer drivers (and crew chiefs, spotters, owners, whoever) learning to say, “I need to look at the video before commenting.” Such could be said on the in-car radio, in a post-race interview, and at most anyplace that is in public (on the other hand, what anybody says in private is their business). This article would not have been written if Martin, Aric, and Kurt had said, “I need to look at the video before commenting.” (It is usually better for one to say nothing, than to wish one could take back something said in anger.)