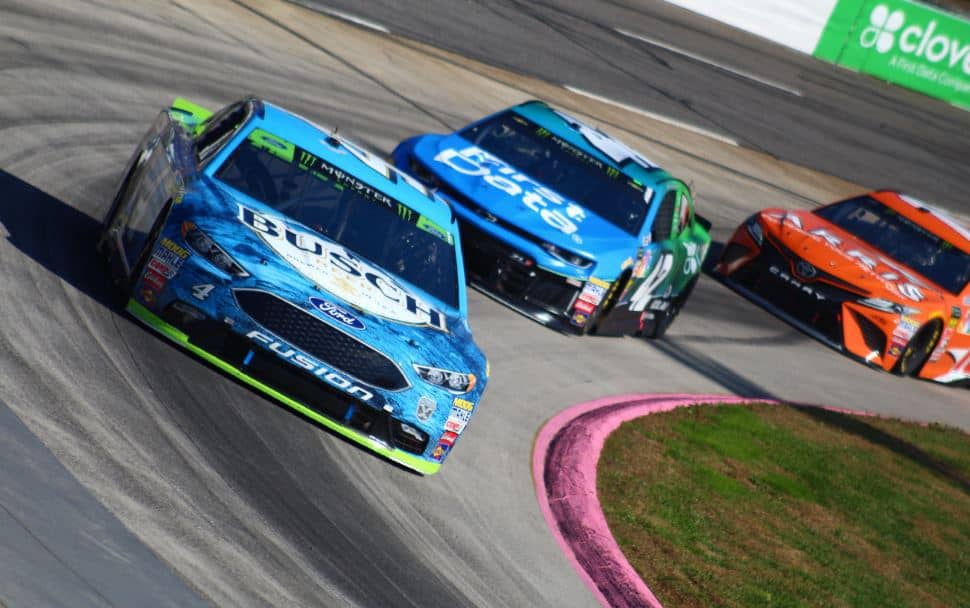 With Kevin Harvick and the No. 4 SHR team saddled with a wallop of a 40-point fine, loss of his pass to the final four, and suspension of his crew chief Rodney Childers for the final two races, following R&D inspection after their Texas win, the refrain from the NASCAR fan base has had a familiar tone to it.

“This is what’s wrong with the sport!”

“This ain’t the way it was when Earnhardt was racin’!”

This sort of revisionist history is not just misplaced emotion, it’s factually inaccurate and wildly unhelpful.

For years there were three off-limits areas of a racecar that would constitute cheating. The first of which were engines. Any attempt at altering the displacement would be met with a stiff fine. Carl Long was the last one to get taken to the woodshed for that – and that was for running a worn out engine in the All-Star Open a decade ago that was probably down 80 horsepower to the competition – and he was banned from the garage until just about a year or so ago. Fuel was the next no-no. So much so it almost cost Michael Waltrip his race team (one of the many times) when they debuted at Daytona with sterno slime in the intake runners. Tires were the last thing you weren’t supposed to fool with. Ryan Newman’s No. 31 team was drilling holes in theirs to prevent excess air pressure build up back in 2015. That resulted in a 75-point fine – almost twice as large as what Harvick received.

There’s also traction control as far as death-sentence fines…but nobody wants to go down that road. Has it been used before? Absolutely. Will you get banned for life if it’s discovered? Probably.

Harvick’s SHR team is suspected of manufacturing their own spoiler, rather than the one that NASCAR mandates to be used and unaltered by the manufacturer. While they didn’t alter it, that completely fabricated one themselves, doing the exact opposite of what the rule book states. This isn’t an instance of some creative bodywork, or being .001 out of tolerance on a quarter-panel measurement. It was a willful attempt to use a part that is not supposed to be used.

Yeah I know, Smokey Yunick built a car that drove back to the garage after they removed the gas tank, and Bill Elliott’s Talladega T-Bird made up two laps because it was a 9/10 scale version.

Given the importance of aerodynamics today, altering these parts isn’t exactly creative engineering – it’s getting dangerously close to the “C” word. This isn’t helpful for a sport that has the perception of everybody is breaking the rules, because of the romantic history many have of creative engineering and operating in what at the time was a palpable gray area. During Jimmie Johnson’s improbable five-consecutive championship run from 2006-2010, the perception among some NASCAR fans not wearing No. 48 gear was that there had to be something illegal on that car for it to be unbeatable for half a decade, given his crew chief Chad Knaus’ history of fines.

That isn’t something we need to revisit now at this time with the stands struggling for bodies still.

For a team that was called out earlier this year for having a rear window collapsed in the middle after winning Atlanta, it’s hard to look at this penalty as just a normal infraction. The box the teams are forced to work in provides ample temptation to try and work in not only gray areas, but areas that are quite red and say “Do Not Enter”.

That’s not to say that they are the only ones doing things that aren’t by the book; far from it. I’m sure there’s probably something in every top 10 car that might be perceived as out of spec, but this one put NASCAR in a weird spot. The playoff system which puts a win-at-any-cost premium in the 10 races gets precipitously worse in the final rounds – just ask Martin Truex, Jr. – is a contributor as well. This looks to be a line in the sand that NASCAR drew to effectively remove the No. 4 team from the final four championship round. A stiff penalty to be sure, but the last thing we need in Florida is trying to figure out who won the big contest there a week or two after it happened, because of some unforeseen issues that popped up.

Seems to be their thing down there.

If you are a No. 4 fan however, take heart. Harvick is headed to his best track statistically, having won there in April, and five of six in a row from 2013-2016. Those are pretty good odds, and these types of storylines usually end up producing the unlikely outcome, redemption story, improbable underdog victory that nobody (or everybody) saw coming. Should Harvick and interim crew chief Tony Gibson pull off the win and get back in the final four heading into Homestead, it will be a great story to rally around heading into Ford Championship Weekend, particularly for Ford.

Otherwise, the black could of a penalty will still be dominating the headlines, and that’s not good for NASCAR, the fans, or the final race of the year, heading into an off-season preparing for a new breed of racecar that doesn’t seem to be getting a warm reception from drivers or fans that are mechanically aware of the cars are being neutered next year.