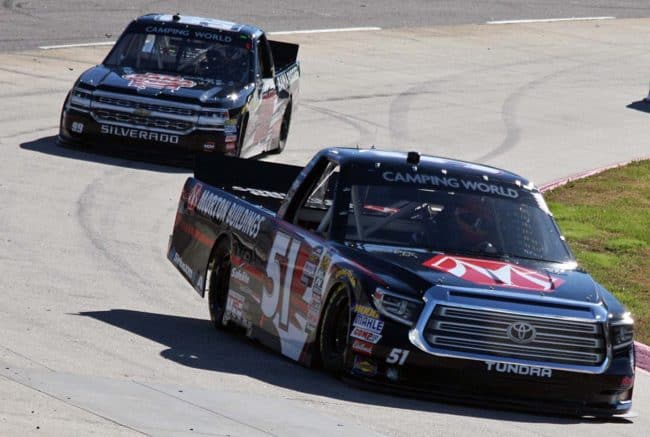 Harrison Burton led the way in both of Friday’s (Nov. 9) practice sessions in advance of the Lucas Oil 150 at ISM Raceway. It’s his first time in a NASCAR Camping World Truck Series truck at ISM Raceway as he will make his 14th start Friday Night.

Burton turned a 135.425 mph lap around the newly reconfigured ISM Raceway to put his No. 51 DEX Imaging Toyota Tundra on top of the speed charts. His Kyle Busch Motorsports teammate Noah Gragson finished the session in second, the fastest of the playoff drivers during the first practice session. He was just 0.014-seconds off of Burton.

Ben Rhodes finished the session in third while playoff drivers Matt Crafton and Johnny Sauter rounded out the top-five speeds.

30 trucks turned a lap during the session with Jesse Iwuji turning the slowest lap of the session. The margin between first and 30th was 7.252-seconds.

Burton turned a 136.121 mph lap during the second round to put his No. 51 on top of the speed charts. Gragson also finished second in the final practice with a lap that was 0.113-seconds off of Burton.

Again, much like in first practice, Moffitt (ninth) and Enfinger (13th) were the slowest two playoff drivers.

32 trucks turned a lap during the session with Iwuji again the slowest. The margin between first and 32nd was just 3.062-seconds compared to almost seven seconds in the first practice.

The race will determine the Championship 4 field. GMS Racing teammates Haley and Sauter are already locked in with their victories at Texas and Martinsville.