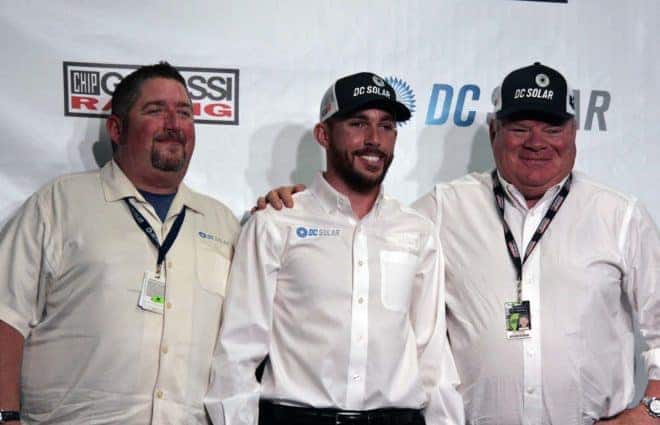 Chip Ganassi Racing announced Friday (Nov. 9) that Ross Chastain will pilot the No. 42 DC Solar Chevrolet Camaro in 2019 full-time in the XFINITY Series. After spending almost four years at JD Motorsports, Chastain will move to the No. 42 car where he earned the victory in Las Vegas just a few weeks ago.

“It’s not the traditional way I have seen done in the last 10 years,” said Chastain about the move from the smaller funded JD Motorsports to Chip Ganassi Racing. “I am proud to do it the way I did it now. I can’t say that five years ago I saw it working out.

“My first time at Las Vegas and my first time at Phoenix were start and parks for Bobby Dotter. We ran most of the year, got to the end and couldn’t run the whole race so I come back to these tracks every year now and I think about that.

“Honestly, I think that’s what helped prepare me to be in the 42 car and be able to get everything out of it.”

As noted above, Chastain’s road to this point hasn’t been a traditional one. He has been in the XFINITY Series since 2014 running for teams like JD Motorsports, Tri-Star Motorsports, Hattori Racing Enterprises and now Chip Ganassi Racing. When it comes to his career in the Truck Series, Chastain has gone down the same road with running for teams like Stacy Compton’s Turn One Racing, RSS Racing, SS-Green Light Racing and ultimately making the move to Brad Keselowski Racing in 2012.

Concerning the news on the No. 1 car, Ganassi didn’t have any announcements to make during that conference. Kurt Busch, the rumored driver of the No. 1, stated he still is trying to line up his plans for the 2019 season.

Christian Koelle returns to Frontstretch in 2020 as the photo editor at Frontstretch. He will continue to contribute content in the ARCA Menards Series, Sioux Chief Challenge, and ARCA East & West Series. He is also engaged and will be getting married during the 2020 NASCAR off-season. His favorite tracks on the circuit include Barber Motorsports Park, Iowa Speedway, Martinsville Speedway, Talladega Superspeedway, Fairgrounds Speedway Nashville, and Bristol Motor Speedway. During the season, Christian also spends time as a photographer with multiple other outlets shooting Monster Energy AMA Supercross, Minor League & Major League Baseball, and NCAA Football.
@KoelleChristian
Previous Park Place Motorsports Expands, Joins Forces with VOLT Racing for 2019
Next Harrison Burton Sweeps Truck Practice Sessions at ISM Raceway