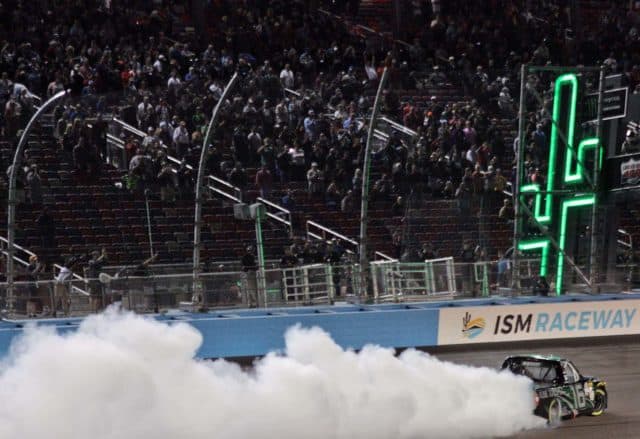 A late race caution and the dogleg put a storybook ending on Brett Moffitt‘s race at ISM Raceway. A race where Moffitt just sat in the bushes waiting to pounce and that was just what he did. Moffitt passed both Noah Gragson and Grant Enfinger during the final restart with three laps remaining to secure his sixth career NASCAR Camping World Truck Series victory and fifth this season.

“We just had a badass KOBE Toyopet Tundra,” said Moffitt. “I kind of screwed us by getting a speeding penalty there, but more importantly it’s Veteran’s Day weekend and I have to give a shout out to all those who have served and are currently serving. Also, very special to us, we have a steering wheel here and it’s got Torie Costa Foundation on it, which is Scott Zipadelli’s (crew chief) daughter who passed away from pancreatic cancer. It was her birthday yesterday so I’m glad she was in the car with me and I know this is going to mean a lot to our race team.”

“We’re focused on Homestead already and we just knew that we had to have a smooth night. When the 98 (Grant Enfinger) got up there obviously we started worrying and that’s when we knew we needed to win. Can’t say enough for this group and Toyota, TRD, Joe Gibbs 299th engine win with Mark Cronquist. They’ve put our backs against the wall, but this son-of-a-b**** did it again. I can’t say enough about them and all of our partners and just this whole HRE team.”

Gragson finished the race in second while Harrison Burton, Enfinger, and Stewart Friesen rounded out the top five.

With the victory, Moffitt will join Johnny Sauter, Justin Haley, and Gragson at Homestead-Miami Speedway next weekend. ThorSport Racing teammates Enfinger and Matt Crafton were the two drivers to be eliminated.

The path to victory was nowhere near easy for Moffitt, who had to overcome an early speeding penalty after winning Stage No. 1. That stage victory would’ve been very important late in the race, but it wound up not being important as he would take the checkers automatically putting him into the Championship 4.

The path to making the Championship 4 for Gragson was nowhere easy either. He overshot his pit box and brushed the wall, putting his back against the wall. He was only able to recover to eighth by the end of Stage No. 2.  Ultimately, the issue almost came back to bite him. Points were close for Gragson but in the end, he pushed his way back up front, earning the second-place finish and punching his ticket to Homestead.

.@NoahGragson comes in hot on pit road and has an extended stop as a result.#NASCARPlayoffs pic.twitter.com/ukO7kPA976

For the GMS Racing teammates, they were very thankful for their victories at Martinsville and Texas. Friday was rough for them as both drivers struggled and the final nail in the coffin for Haley was a cut “soft” oil line which ultimately put out a 10 minute and 47-second red flag. Haley would end up with a 28th-place finish. Sauter would just struggle but he still rebounded to finish the race seventh.

2018 NASCAR K&N Pro Series East Champion Tyler Ankrum just barely missed out on finishing inside the top five in sixth. Despite a minor hiccup in qualifying, Derek Kraus sealed the deal on a great finish in his debut race, finishing eighth.

John Hunter Nemechek was firing on all cylinders late and was looking like he would pick up the victory but like most of the season, something would go wrong in the end and he’d wind up with a disappointing finish. Nemechek and Enfinger were battling for the victory. Nemechek got loose and couldn’t correct it and wound up spinning and losing a tire. He would finish 29th.