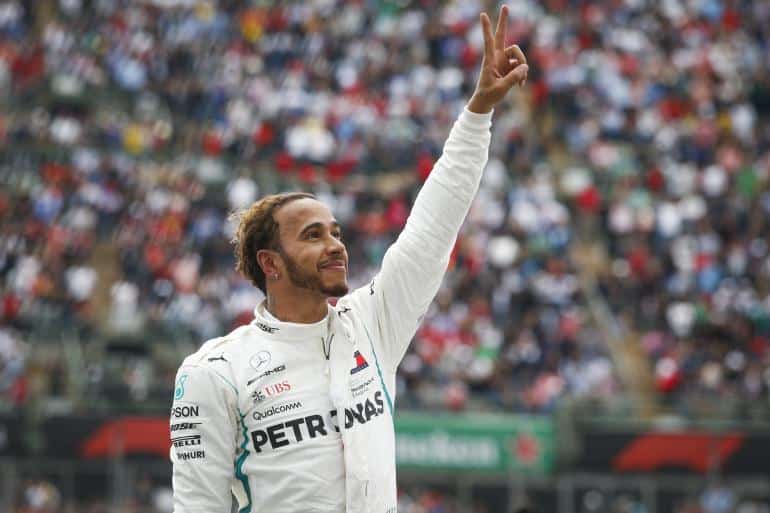 It was a very interesting qualifying session for round 20 of the Formula One season at Interlagos in Brazil. The rain came and went, there were drips of controversy for a couple of the top drivers, but through it all Lewis Hamilton, fresh off of winning his fifth World Championship in Mexico secured his tenth pole position of the season and 100th pole for his Mercedes AMG Petronas team.

When qualifying began, all of the teams took to the track faster than usual because there was a 60 percent chance of rain, so the onus was on getting a lap time out as soon as possible while the track was dry. The rain began falling about five minutes into the first qualifying session but did not affect the car’s speed until the end of Qualifying Session No. 1 when the rain picked up. This also created a question as to how the rain would impact the second qualifying session. The teams began Qualifying Session No. 2 on dry tires before the rain began falling hard halfway through the session, not allowing any driver aside from Charles Leclerc to improve their time at the end of the second session.  The rain then cleared up for Qualifying Session No. 3, not impacting the team’s laps.

There was a bit of controversy for Hamilton during Q2. Sergey Sirtokin in the Williams was on a fast lap as he approached Hamilton’s car. Hamilton tried to get out of the way to the left, but Sirotkin was already committed to pass on the left side and the two nearly collided at high speed. There is no word as to whether or not Hamilton will be investigated for blocking, which could result in a grid penalty, but it was a scary moment none the less.

Sebastian Vettel qualified second but is potentially in trouble with the FIA. Formula 1 requires cars to be weighed randomly throughout the session in an attempt to make sure the cars stay at a legal weight. Vettel was asked to do so in Q2 with the rain coming. He became impatient as he wanted to get on the track before the rain ruined the surface. Vettel did not turn the car off as the FIA requests, then hit the gas too hard leaving the weigh bridge. These actions destroyed the weighbridge and they could not use it moving forward. Vettel will need to see the stewards after qualifying and there is a chance he could be disqualified from qualifying as a result. Therefore his qualifying position is unofficial.

Valtteri Bottas was third quickest ahead of Kimi Räikkönen in fourth. Max Verstappen will roll off in fifth. Daniel Ricciardo qualified in sixth, but has a five-place grid penalty for tomorrow’s race. Marcus Ericsson out-qualified his teammate Leclerc for the first time this season as the Sauber teammates qualified seventh and eighth respectively. Romain Grosjean was ninth while Pierre Gasly weathered the storm (literally), he barely escaped Q1 before recovering to nab the 10th starting spot.

Kevin Magnussen was almost through to Q3 but with Leclerc somehow improving his time, Magnussen was eliminated as the 11th fastest qualifier. The Force India teammates of Sergio Perez and Esteban Ocon qualify 12th and 13th respectively, ahead of the former Force India and now Renault driver, Nico Hulkenberg in 14th. Sirotkin qualified 15th.

Carlos Sainz Jr. was the first driver struck by the rain as he could not improve his time at the end due to the lack of grip and qualified 16th. Brendon Hartley was 17th as he could not match his teammate of Gasly and get out of Q1, as the Toro Rosso cars seemed to be able to put the final fast lap in before the rain impacted the track. Fernando Alonso was 18th as the McLaren car does not seem to be competitive this weekend. Lance Stroll also failed to match his teammate and get to Q2 when the rain came and qualified 19th. Once again, Stoffel Vandoorne was the slowest car on the track in 20th.

The Brazilian Grand Prix is set for lights out on Sunday just after 12:05 pm EST. Will the front row change due to potential meetings with the stewards? Time will tell.