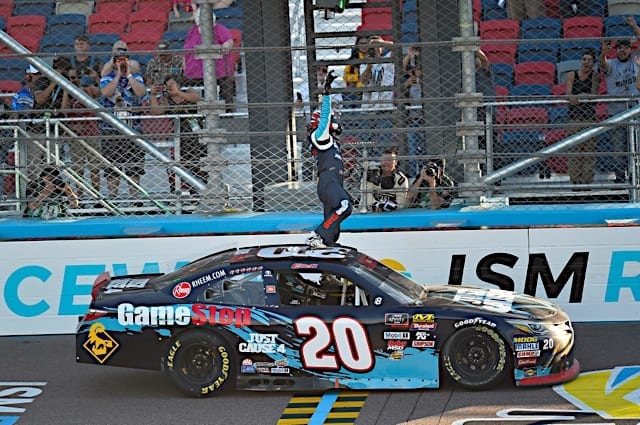 After two straight DNFs and three inspection failures that resulted in a starting spot of 38th Saturday, Christopher Bell‘s back was against the wall. Once the race went green, Bell methodically moved up through the field and powered past John Hunter Nemechek with 93 laps remaining. From there, Bell kept it clean to tally his seventh victory of 2018 earning his spot in the Championship 4. Bell joins Texas winner Cole Custer, Daniel Hemric and Tyler Reddick in championship contention in South Florida.

“The pressure was on,” Bell told NBC Sports’ Marty Snider in Victory Lane. “I’m very thankful for all my mentors; they’ve done such a good job taking care of me. It started out with my mom and dad as a kid. From there, I moved up to Ohio and lived with a guy named Rick Ferkle and Pete Willoughby. All those guys have become such great mentors to me. They prepared me for moments like this where everything’s on the line.

“I’m just thankful that I pulled through for my team,” Bell continued. “These guys are the ones that build these race cars that are going to win races whether I’m in the car or not. It’s my job to get the results that they deserve. I’m just really thankful that we get to race for a championship next weekend.”

Hemric finished the race nearly two seconds back in second while Matt Tifft, Austin Cindric, and Ryan Preece rounded out the top five. Allgaier did all he could do Saturday (Nov. 10th), but an incident with Nemechek and Tyler Reddick with less than 55 laps to go pushed Allgaier into a deep hole. The damage and resulting repairs led to a serious braking issue that culminated with a fire. He ultimately finished a lap down in 24th and was eliminated from championship contention along with Elliott Sadler, Tifft, and Cindric.

Speaking of Cindric, he wasn’t going to be pushed around anymore. The driver in a must-win situation raced everyone hard including Allgaier. Multiple times during the race, Cindric showed what he was willing to do, exchanging bumps and rubs with a number of others. On lap 135, Tyler Hill spun on the backstretch right in front of the leaders. In the process, Cindric ran in the back of Allgaier and got the BRANDT Chevrolet all bent out of shape, but both drivers were able to continue without issues.

All of the drivers were going to need to pit sometime before the end of the race when the caution came out for Hill. All the drivers came down pit road and it was almost catastrophic for Allgaier who slid into his box but he was lucky as all four tires were in the box.

After that caution, Hemric would assert himself in the battle alongside his teammate Tifft. Bell and Hemric almost went to the inside wall but Bell was able to pinch the Richard Childress Racing teammates and keep the lead, with Hemric in tow. Tommy Joe Martins went up in smoke and came to a stop at the bottom of the dogleg putting the caution out setting up another restart for Bell.

Bell would successfully hold off the Richard Childress Racing teammates during that restart and that’s when Bell started setting sail.  Bell would continue to lead and tick away laps until the checkered flag displayed sending Bell to the Championship 4 next weekend.