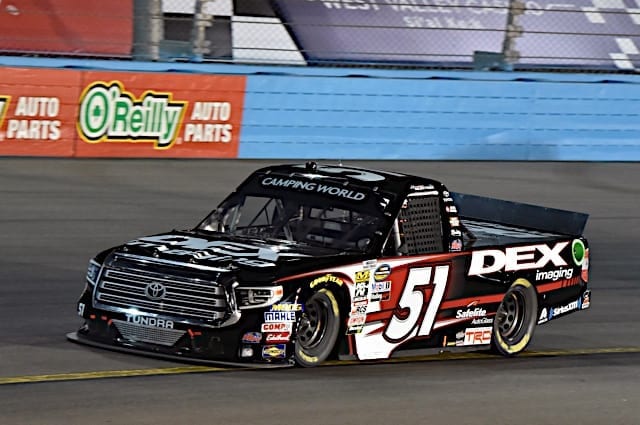 It wasn’t a win but Friday night’s (Nov. 9) Lucas OIl 150 from ISM Raceway showed it all from Harrison Burton.

Rolling off the grid in the third spot, the 18-year-old was a consistent contender in the top five, finishing third in stage one before jumping to a stage win in stage two.

He continued to lead the most laps on the night (46), and when it came down to a three-lap shootout for the race win, wouldn’t you know it, he was in on the action.

Restarting fourth, Burton was struggled behind Kyle Busch Motorsports teammate Noah Gragson and was stuck in defense mode as the top three fought for the top spot.

“It was craziness, it always is at places like this,” Burton said. “Especially when there are lots of options.”

Passing Grant Enfinger for third spot with two laps to go, Burton ended the night with the podium result, his third top five of 2018 in seven starts.

However, when you lead the most laps, you want victory.

“I’m just so disappointed,” he said. “It’s hard when you see one that you could have won and you don’t end up in Victory Lane. It sucks.”

Still, the Virginian has taken notice of improvement in 2018. Finishing third in his 14th start, Burton scored only one top 10 in his first seven starts and now has six top 10s in his last seven. Someone is excited about 2018.

“We had a really fast truck, won a stage,” he said. “We’re making steps toward it, we just have to put it all together one night.”