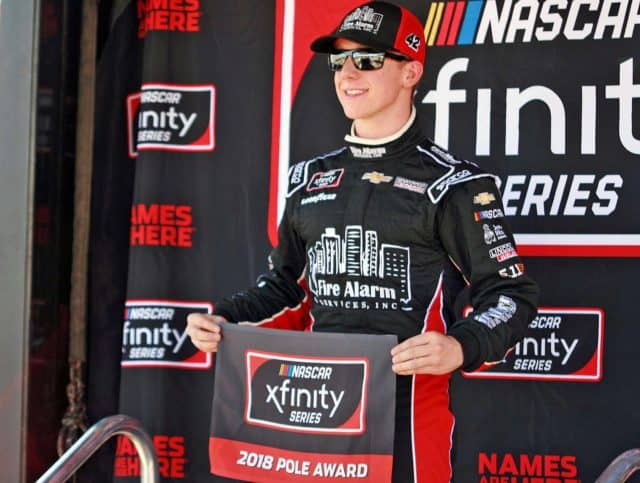 John Hunter Nemechek has been discussed multiple this weekend in the ISM Raceway Media Center. After leading final practice on Friday (Nov. 9), Nemechek backed it up with a fast lap in the Final Round to put his No. 42 Fire Alarm Services Inc. Chevrolet Camaro on the pole.

Nemechek turned a lap at 133.482 mph lap during the Final Round to push last weekends winner Cole Custer off the pole. Custer is the only driver who enters this race with a little-to-no need to do anything except go out and win the race. Custer’s lap was less than two-hundredths of a second off of the pole.

Austin Cindric, who is in a must-win situation, will start the race from the third position followed by Justin Allgaier and Ryan Preece.

Two playoff drivers failed to make it into the final round of qualifying and one of those failed to even turn a lap during the session. Tyler Reddick will start the race from the 14th position while Christopher Bell’s string of bad luck continued. Bell failed inspection three times which will push him to start from the rear of the field. Car chief Chris Sherwood has also been ejected from the track.

37 of the 40 drivers entered turned at least one lap during the session. Bell, Ty Majeski, and Josh Bilicki all three didn’t turn a lap during the session meaning they will start 38th, 39th, and 40th. Like Bell’s car, Majeski’s No. 60 failed inspection thrice, resulting in car chief Zach Marquardt being ejected from the premises.

NASCAR XFINITY Series Countdown to Green kicks off at 3 p.m. ET on NBC followed by the Whelen Trusted to Perform 200 at 3:30 p.m. ET.