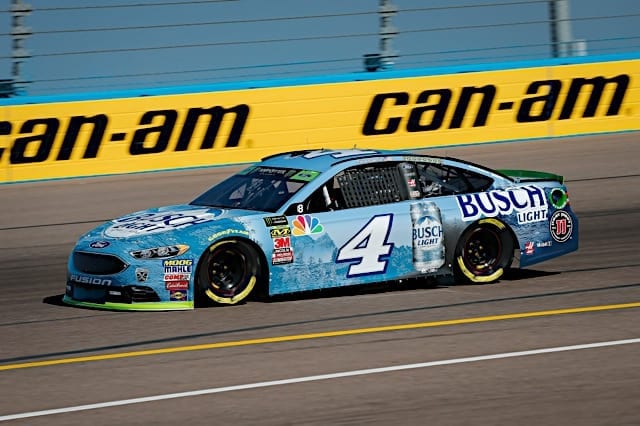 Last weekend is in the past for Kevin Harvick which is just the way he wants it to be. Harvick swept both practice sessions on Saturday in advance of Sunday’s Can-Am 500(k) at ISM Raceway.

Harvick turned in a lap at 134.710 mph around the ISM Raceway to put his No. 4 Busch Light Ford Fusion on top in the early practice session Saturday morning (Nov. 10). Kyle Larson, who was impressive here last fall before losing an engine early, finished the session in second just six-thousandths second off of Harvick.

Brad Keselowski finished the session in third while Kyle Busch and Ryan Blaney rounded out the top five speeds.

Timmy Hill was the slowest driver of the session with 38 of the 39 drivers turning a lap during the session. Hill’s lap was 1.362-seconds slower than the first place car of Harvick. The only driver not to turn in a lap was Cody Ware. The Rick Ware Racing team is still prepping the backup car that they borrowed from Premium Motorsports after Ware’s brake line failure on Friday.

The session had only one caution flag thrown for a spin for Obaika Racing’s Tanner Berryhill in Turn 1. Berryhill’s No. 97 Toyota was undamaged and ended up 37th on the chart.

The final minutes of practice were spent in restart practice since the start-finish line and restart box was moved into the exit of what used to be Turns 1 and 2. It was definitely an interesting sight, seeing teammates, playoff drivers, and everything working on getting the restarts for tomorrow’s race in a familiar place.

Harvick led the way in second practice also. Harvick was greeted by a round of applause from the fans as he got into his car per NBC and those Harvick fans could be in for a treat on Sunday. Harvick posted the fastest lap in the final practice at 135.125 mph.

All 39 cars entered turned at least one lap during the session with Ware being the slowest. The margin between first and 39th was 1.682-seconds. It was Ware’s first chance to get behind the wheel of the No. 51 backup car, which is a Chevrolet as opposed to the Ford Ware crashed Friday.

The session ended a little early due to a late crash for Paul Menard. With less than a minute remaining in the session, Menard had a flat left rear tire and backed it into the wall in Turns 3 and 4. Menard walked away from the crash, but he will have to go to his backup car for Sunday’s Can-Am 500 and start at the rear.

NBC’s Countdown to Green kicks off on NBC at 1:30 p.m. ET and it’s followed by the Can-Am 500, the final race of the Round of 8. After tomorrow’s race, we will know the four drivers who will battle for the title at Homestead-Miami Speedway next weekend.