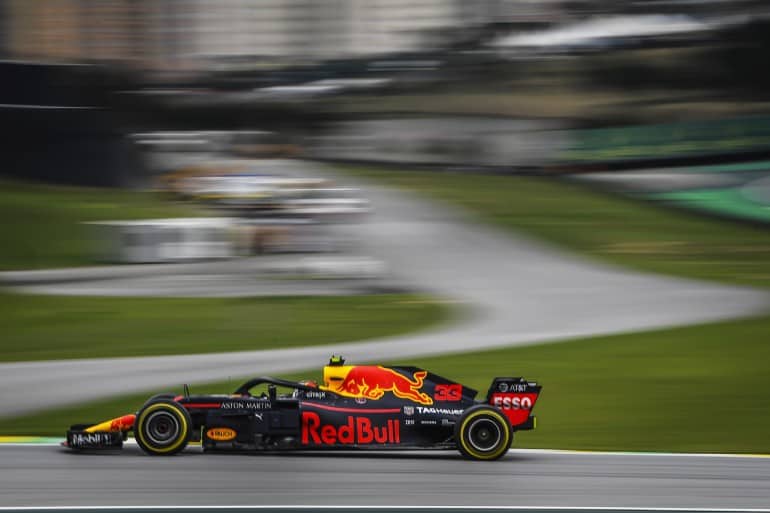 Sometimes fortune rolls a certain way.  Then sometimes fortune comes in the form of Esteban Ocon spinning out race leader Max Verstappen.  Lewis Hamilton found himself in the enviable position of being in second when Ocon and Verstappen collided, turned it into a five-second lead, and held on from there at Interlagos in Brazil.  Verstappen steered his Red Bull across the line in second with the Ferrari of Kimi Räikkönen taking the final step on the podium.

With the combination of Hamilton’s win and Valtteri Bottas’ fifth-place finish, Mercedes earned their fifth consecutive Constructors Championship.  This string of titles follows Red Bull’s four straight championships but has not yet matched Ferrari’s excellence, when they won six in a row from 1999-2004.

The Brazilian Grand Prix started just as Mercedes and Hamilton would have desired.  Hamilton used his pole position spot to precision and sped away from the pack while his teammate Bottas, starting third, managed to slip past the Ferrari of Sebastian Vettel to hold down second.  Things looked just about perfect.

Though Hamilton was able to earn the win, the Mercedes never showed that they were the dominant car.  In fact, it was the Red Bull duo that looked to be the best on the track. Verstappen was able to claim second and teammate Daniel Ricciardo, after suffering a five-spot grid penalty for exceeding season-long engine limits, drove from tenth up to fourth and nearly pulled off third.

On lap 44 (of 71), Force India’s Ocon was driving with fresh tires and sought to put himself back on the lead lap.  He raced wheel-to-wheel with leader Verstappen. Right after the start-finish line, Ocon made his move on Verstappen in the Senna S. Neither left either room and banged into each other.  The collision sent both cars spinning and off the track. Hamilton sped past and into the lead.

Some may conjecture that Ocon, driving a Mercedes-powered car, may have interfered so as to directly help Hamilton.  While conspiracy theories are all the rage anymore, such a consideration should be thrown into the rubbish bin with haste.

The question of whether Ocon should be faulted is more worthwhile.  A driver certainly has the right to race in an effort to maintain their position on the lead lap, but Ocon may have been pushing it a little too hard.  The reality of the situation is that he was never going to be able to keep Verstappen in his rear views and that conceding the position would have been intelligent.  But racers race, and this moment was an opportunity for Ocon to make a measure of himself.

For Verstappen, even he should endure some criticism as he could have waited until after the Senna S and re-passed Ocon with ease.  Hamilton was roughly two seconds behind, so there was no real threat should Verstappen had exercised a bit of patience.  The stewards agreed with Verstappen’s assessment that Ocon was an idiot, however, and dropped a 10-second penalty on him.

The action didn’t end once the checkered flag flew. After the race, Verstappen confronted Ocon.

There was contact on the track, and a bit off it too ? #BrazilGP ?? #F1 pic.twitter.com/OajZ1UM4lL

As a result of this incident, both drivers were called to the stewards. No word as to potential penalties from the confrontation.

– For all of Ferrari’s early season success, they failed to follow it or keep up as the year continued.  After the summer break, they have been lackluster at best — and that is with acknowledging that they had one of the best cars on the grid.

The team could never manage to make handling, speed, and race management come together in a way that Mercedes had done, and even Red Bull had been doing.  That Ferrari were still in contention for the Constructors title is a testament to the car they built but they have proven to be just a tick behind. Of course, Vettel’s long, slow, brain fade should also be factored into the matter, and one of the things that the team must do during the offseason is to get his mind right for 2019.

– Charles Leclerc earned a seventh-place finish in an unremarkable Sauber car.  There is little doubt that his season has been all over the place, but this finish is a highlight and should offer a bit of optimism as Leclerc prepares to move to Ferrari next season.

– One team that should be feeling good after the Brazilian GP is Haas F1.  After their drivers finished 15th and 16th at the Mexican Grand Prix, the prior race, the organization was quizzical.  While even the mighty Mercedes struggled at Autodromo Hermanos Rodriguez when Haas struggles they fall to the rear and don’t pull off top five finishes.  The efforts at the BGP, with Romain Grosjean and Kevin Magnussen earning eighth and ninth, respectively, this race served as a good rebound effort — the question will be whether or not it is a harbinger for a team set to move up the grid or an indication of their assigned spot in the field.

Marcus Ericsson would be happy if footage of his BGP were all erased from history.  His day began with parts falling off his Sauber before the race had even begun. On the opening laps, more pieces removed themselves – end plates and the like – and things didn’t get any better.  That Ericsson started sixth (SIXTH!) and then dropped through the field as though he couldn’t find a gear above second showed things were not going to be tenable. After he spun out, he and the team had seen enough and retired the car.

If Ocon passed Max wouldn’t he then be given the blue flags because he was a lap down?