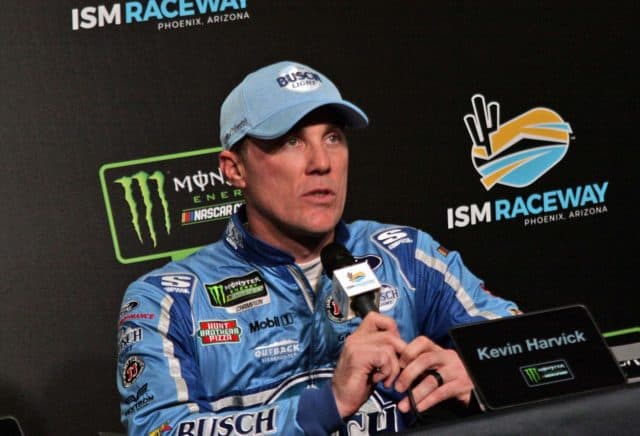 For most of the NASCAR playoffs, the sport’s Big Three of Kyle Busch, Kevin Harvick and Martin Truex Jr. had underachieved. Despite a dominant regular season where the trio won 17 of 26 races, entering Phoenix they’d combined to win two of the last eight.

One of those wins, of course, has a black cloud attached after Harvick got a 40-point penalty for an illegal spoiler following his victory last Sunday at Texas Motor Speedway. The consequences cost him both crew chief and car chief for the final two MENCS races, leaving him just three points above the cutline entering Phoenix. That left none of the Big Three with a spot secured before the green flag fell on Sunday’s (Nov. 11) Can-Am 500.

This trio left themselves vulnerable and nearly paid the price. Kurt Busch led early and arguably had the fastest car on the racetrack. Chase Elliott pushed his way to the front midway through the final stage and appeared the man to beat on long green-flag runs. Aric Almirola, like he has during much of the NASCAR playoffs, improved his car with every pit stop.

But in the end, none of the challengers had Lady Luck shine on their side. Kurt Busch got eliminated in a late-race wreck largely not of his making. Elliott was involved, too, after a speeding penalty cost him valuable track position. Almirola had a shot as the laps wound down but couldn’t capitalize on a front row restart with Kyle Busch.

Instead, Kyle scooted to victory, both Harvick and Truex behind him inside the top 10. It wasn’t easy, in particular for Harvick, who survived a flat tire under green that left him trapped a lap down at one point. But when the dust cleared, each one did just enough to secure their rightful spot in the Championship 4 at Homestead-Miami Speedway. Indeed, for the first time in the history of this 16-driver playoff format one could argue the best four drivers all year are the ones fighting it out for a title.

They’re also some of the most experienced fighting for a championship this way. Each of the Big Three has won once under this format; Joey Logano, rounding out the quartet has made the final round multiple times. These drivers know how to get it done and have earned their rightful place at the table. That said, you have to consider Logano a bit of an underdog compared to the top three. He failed to finish Sunday’s race and has won only twice all year.

So what’s at stake for the Big Three likely to battle it out amongst themselves? Each are seeking a second title that would raise them another notch in NASCAR history. For Truex, it would be a gargantuan accomplishment considering he’s driving for a team about to close its doors. For Harvick, the big trophy would come two weeks after a controversial cheating call. And Busch? It would quiet critics who bristle at his 2015 title after missing a third of the year due to injury.

“I’ve been in the sport for a long, long time,” Kyle Busch said Sunday. “To me, I think it would obviously be a continuation of my legacy in the sport and what I’ve been able to do and what I’ve wanted to accomplish here.  You know, you want to be the best of the best, and that’s better than anybody that’s ever been here before.  200 wins, seven championships, whatever it is, you’ve just got to go out there and continue to collect your accomplishments and hopefully, next week we can do that.”

This trio has been the cream of the crop all year long, even if their performance dipped in the postseason. Next Sunday will finally be the moment when we find out which of this year’s Big Three is truly the best. – Tom Bowles

After crashing out in the first two races in the Round of 8, Christopher Bell accepted the fact he might not make it Homestead with a chance at the championship. But then the series took to ISM Raceway and the No. 20 team was fast.

However, the No. 20 Toyota failed pre-qualifying inspection four times, meaning Bell had to start from the rear and will also lose practice time at Homestead. Methodically, he made his way through the field, taking the lead just past the halfway point.

Once Bell was out front, he was never passed, leading the final 94 circuits, even through a rash of restarts. The victory secured Bell a spot into the championship race at Homestead, joining Cole Custer, Tyler Reddick and Daniel Hemric.

Hemric finished the race a bridesmaid yet again, with Matt Tifft getting his best-career finish on an oval in third. Austin Cindric and Ryan Preece rounded out the top five.

Heading to Homestead, Bell is arguably the favorite for the championship as the rookie has a series-high seven victories this season. However, Custer led 180 of 200 laps in last years race, en route to his first career victory. Reddick won the pole for the event last season, and Hemric goes into the event as a legitimate shot at the title, compared to last year when he was the darkhorse. – Dustin Albino

Brett Moffitt made a dramatic three-wide pass for the lead at ISM Raceway Friday night with just three laps remaining that ended in his fifth win of the season and a berth in the Championship 4. The driver of the No. 16 Toyota joined Johnny Sauter and Justin Haley as winners in the Round of 6, while Noah Gragson scored enough points to advance for a shot at the title.

The victory wasn’t without its challenges for Moffitt, though. Under the stage one end caution, he was caught speeding on pit road and had to restart at the rear of the field. But by the end of stage two, he had rejoined the top 10 and worked his way through the field to be in contention at the end.

If not for a couple of late-race cautions, Moffitt likely would not have been in Victory Lane. Instead, Gragson appeared poised to ride off into the sunset with a win and the momentum all four of this year’s title contenders would love to have.

Next Friday night, the Truck Series will kick off the big Ford championship weekend as drivers hit the track for the final time in 2018. Moffitt remains as the only contender without prior series experience at the mile-and-a-half oval. Realistically, you could make a case for each driver and why they have an edge over their competitors, but as we all know, anything can happen, especially in a 200-mile race. – Beth Lunkenheimer

They will not be bringing the i30 N TCRs that raced this year in Pirelli World Challenge, though.  Instead, they will race the new Hyundai Veloster N TCR.  In addition, Bryan Herta Autosport will serve as Hyundai’s North American vendor of Hyundai TCR cars to customer teams.

“Chapter Two [of Hyundai TCR] is going to be exciting,” Bryan Herta stated.  “We learned so much by racing and winning with the i30 N TCR last season. We know just how excellent the platform is in hard competition. The Veloster N TCR retains everything great about the i30 N and gives us a world-class race car with a direct road-car counterpart that our fans can purchase and drive every day.”

The Hyundai Veloster N TCR is scheduled to make its racing debut in the BMW Endurance Challenge at Daytona on Jan. 25.  Michelin Pilot Challenge teams are scheduled to participate in the Roar Before the 24 from Jan. 4-6, but it is unclear whether the Veloster N TCRs will be ready to go by then. – Phil Allaway

The NHRA Mello Yello Drag Racing Series wrapped up the 2018 season in the same place it started back in February with the Auto Club NHRA Finals from Ponoma. One champion was already decided before the race, but three more emerged today, including Pro Stock Motorcycle’s Matt Smith who faced a winner takes all battle for the title with Eddie Krawiec in the final elimination round.

With Tanner Gray merely needing to qualify in Pro Stock and J.R. Todd holding a hefty 74 points over second place Robert Hight in Funny Car, Pro Stock Motorcycle had the closest championship race going on with Smith holding just four points over Krawiec entering the event. It would come down to a battle between the two at the end of the day, with whoever won the final round winning the championship.

Smith, the fastest qualifier in Pro Stock Motorcycle through the weekend, prevailed with a 6.765 second, 201.22 mph pass, good also for the new speed record in the class. Krawiec ran 6.812 seconds at 198.35 mph in his runner-up effort.

Steve Torrence, meanwhile, made it a perfect Countdown, running 3.702 seconds at 330.07 mph in the Top Fuel final to best Tony Schumacher’s faster but losing 3.700 seconds at 331.61 mph on a holeshot. Torrence won all six of the Countdown races, an NHRA first in any of the Mello Yello classes. He also beat Cameron Ferre, Billy Torrence, and Brittany Force en route to the finals.

J.R. Todd entered the weekend up by 74 points, so when Robert Hight went out in the first round, Todd officially won the championship, but that didn’t stop him from putting an exclamation point on it by winning the race too. Todd ran 3.872 seconds at 329.10 mph to beat Tommy Johnson, Jr. who posted a run at 3.889 seconds, 327.51 mph. Todd beat Jim Campbell, Bob Tasca, III, and Ron Capps in earlier eliminations.

Putting a point on his championship as well was Tanner Gray, who faced off against Drew Skillman in the Pro Stock final. Gray scored the win with a 6.519 second, 211.86 mph run after Skillman redlit on the starting line. Gray also became the youngest professional class champion in NHRA history with his title.

He raced his way past Shane Gray, Erica Enders, and Jason Line before facing off against Skillman.