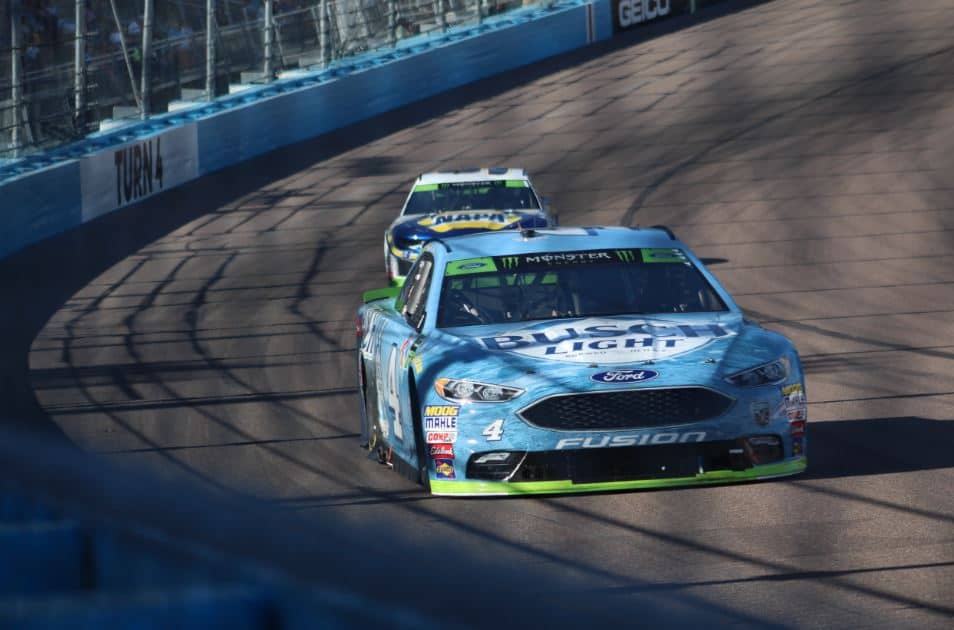 One week ago, Kevin Harvick looked like the odds-on favorite to win a second championship in NASCAR’s top division.  In fact, he rolled to a convincing victory at Texas Motor Speedway, winning both stages in the process.  Kyle Busch, likely Harvick’s biggest title threat, was a little bit off all day.  He finished an uninspiring 17th at a track where he had won earlier in the season.  While Busch and Martin Truex Jr. faced another week of uncertainty, Harvick left Texas with a ticket to the championship race in hand.

NASCAR revoked that ticket on Wednesday morning.  Harvick’s No. 4 team received a hefty penalty for an improperly mounted spoiler.  In addition to losing 40 points and a pass to Homestead-Miami Speedway, Harvick lost his crew chief Rodney Childers and car chief Robert “Cheddar” Smith for the rest of the season.  Instead of being a lock for the final round of the playoffs, Harvick came to this weekend’s race at ISM Raceway only three points above the cut line.

Still, we are talking about Harvick at ISM Raceway.  He won in Phoenix earlier this season, his ninth Cup Series victory at the one-mile track.  That win followed a week when the No. 4 team got hit with a different penalty after winning a race at an intermediate track.  Harvick may have been down, but he seemed a long way from out.

After a chaotic race in the Arizona sun, Harvick did reclaim his position in the final round of the postseason, but not by winning.  It was Busch who led the most laps on the day and captured the checkered flag, his first at Phoenix since 2005.  Harvick was strong too, but a flat tire just before the end of the first stage knocked him out of the race lead.  Finding himself one lap down, and with his playoff rivals threatening to win, the No. 4 team faced the very real possibility of being eliminated from the championship race.

Fortunately for Harvick, the No. 4 car was still quick after the flat tire, and his team was considerably luckier for the rest of the race.  Joey Logano’s crash got Harvick back on the lead lap after a short green flag run.  After that, Harvick’s challengers all fell by the wayside.  The biggest turning point was a late-race wreck that took out Kurt Busch and Chase Elliott, among others.  Busch had fought his way back into contention after a pit road penalty threatened to ruin his own title chances.  The No. 41 team did recover from the penalty, but not the crash.

Busch and Elliott being out of contention gave Harvick a leg up.  The only real threat was from another teammate, Aric Almirola.  In the closing laps of the race, Almirola was marching through the field on fresh tires, challenging for the race win.  Had Almirola pulled off the victory, Harvick would have been eliminated, losing to Kyle Busch and Truex on points.  But once again, speed and a little luck saved Harvick.  Busch’s No. 18 raced away from Almirola’s No. 10 over the last run.  With Busch taking the checkered flag, Harvick claimed his position as the only Stewart-Haas Racing driver to avoid elimination in the Round of 8.

Ultimately, nobody who was below the cut line heading to Phoenix dropped out.  That means that all of 2018’s Big Three will compete for a championship next week.  Logano’s impressive consistency throughout the season makes him a worthy challenger.  So, perhaps Harvick’s challenge for Homestead is what everyone thought it would be – defeat the 2018 season’s other big winners by winning the race and the championship.  But even though Harvick weathered the storm at Phoenix, that task still seems tougher than it did a week ago.

Consider the advantages that the other playoff drivers hold.  Logano and the No. 22 team have had two weeks to prepare for Homestead.  Truex and Furniture Row Racing are down to their last race together and may be more motivated than anyone to win another title.  Then there is Busch, who went into Harvick’s best track and defeated the No. 4 team after struggling a week ago.  Harvick, on the other hand, seemingly had the speed and playoff points to forge an easy path to Homestead.  Yet he had to fight to the last laps at ISM just to make sure he could advance.  He made it in the end, but his crew chief and car chief are still on the sidelines for the most important race of the year.

The puzzling thing about the No. 4 team is that it can be its own worst enemy.  At most of the intermediate track races in 2018, Harvick has been the driver who was most likely to show up with the fastest car off the truck.  Whatever SHR does to Harvick’s cars at the shop has been the key to his success.

In-race execution is another story.

Mistakes on pit road have blocked Harvick’s path to Victory Lane on several occasions this year.  Pit road mishaps have cost him potential victories at Dover International Speedway and Kansas Speedway during the playoffs alone.  The No. 4’s flat tire at Phoenix was further beyond the team’s control than other missteps this season.  Yet once again, having the best speed to start the race did not translate to a win for Harvick.

With one race left in 2018, the team’s margin for error is gone.  If Harvick and the No. 4 crew perform at the level of which they are capable, he is still the favorite to win the championship.  But if doubts about past mistakes start to creep into the minds of the SHR crew members, they could bring another fast car to the track and lose again.  It is too late to undo those mistakes.

The only way for Harvick to win a second championship is to keep looking forward.