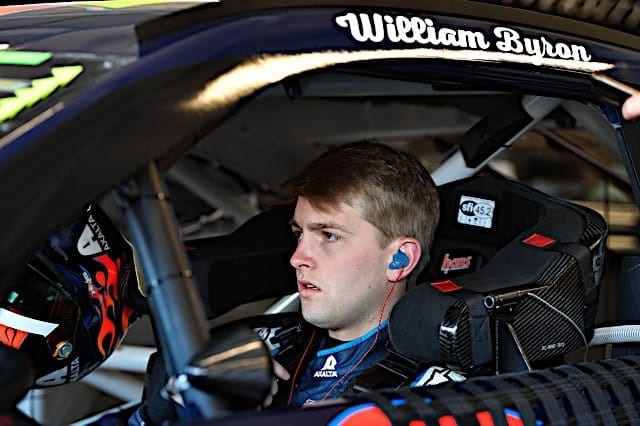 Though the Can-Am 500K at ISM Raceway ended with a predictable top four duking it out for the Monster Energy NASCAR Cup Series championship next week, and a Kyle Busch win, it was bizarre how many twists and turns it took to get there.

First, Kevin Harvick had to deal with the Texas penalty, and then a flat tire right before the first stage ended. Clint Bowyer‘s day ended in a single-car wreck due to a flat tire, Kurt Busch and Chase Elliott both had to deal with pit-road violations before being collected in a wreck by Joe Gibbs Racing’s Denny Hamlin. Finally, Harvick had to hold off his Stewart-Haas Racing teammate Aric Almirola for the final spot in the championship four.

Hamlin has now kept Elliott out of the championship race two years in a row.

29 of the 39 vehicles were still running at the finish, and Obaika Racing’s No. 97 finished the team’s second Cup race in a row, though Tanner Berryhill brought out two cautions late.

There were two red flags in the 312 laps of the newly reconfigured track for the blazing vehicles of Ricky Stenhouse Jr. and Alex Bowman, and eight drivers from all three manufacturers led laps.

It was a day to forget for Team Penske. Logano’s day was done following a flat tire, Ryan Blaney had a random flying lugnut puncture his radiator, and alliance teammate Paul Menard had engine problems early on that essentially ended their day before it began, leaving them all with finishes of 37th (Logano), 34th (Blaney) and 29th (Menard). Still, it wasn’t all bad – Brad Keselowski matched his car number with a runner-up finish.

It seems like Jamie McMurray’s Cup career is probably finished. He only has seven wins in 16 full-time seasons, but how many drivers can claim a Daytona 500 win and a Brickyard 400 victory? His sixth-place run on Sunday gave him 168 top 10s in 581 starts, so that’s not bad. Plus he was always a hit with sponsors, which helped the big-race specialist from Joplin.

Daniel Saurez‘s time with JGR is nearly ended, and it’s going out in near-invisibility. The No. 19 wrecked out of the race by plowing into Kenseth, giving Suarez his ninth Cup DNF. He’s totaled just four top-fives and 21 top-10s in two seasons, which is unacceptable by JGR standards, and his average finish has dropped from 16.2 his rookie season to 18.2 this year.

William Byron‘s rookie season didn’t turn out how he expected, in all likelihood, with nine DNFs and an average finish of 22nd. But on Sunday he finished ninth in the Hendrick No. 24, which was his fourth top-10 result and clinched the Rookie of the Year title. Except for a crash and an engine failure, both in the Truck Series, Byron has never finished worse than 12th at Phoenix across the three national series.

Ricky Stenhouse Jr. continued Roush Fenway Racing’s horrid season as the No. 17 ended in a gigantic fireball, finishing 33rd. He’s had six DNFs this season and an average finish of 19.5, with 10 finishes of 25th or lower.

The No. 6, split between Trevor Bayne and Kenseth, has had seven DNFs and has an average finish of 23.0/20.9 depending on its driver. Kenseth earned the team’s only top-10 of the season and best finish of the year with his seventh-place result in a damaged race car.

"There’s a lot of pride with Mike Bugarewicz and all the guys on the 14 car. It’s been a lot of fun to go to battle each and every week all across the country with these guys."@ClintBowyer finishes 35th at @ISMRaceway.https://t.co/sA6ubKj70F pic.twitter.com/LhU3u0wDBk

Bowyer’s No. 14 was orange this week as computer company IT Savvy was sponsoring, and I like orange race cars. Besides, this late in the season it’s hard to remember what hasn’t already claimed this space, which is why Chris Buescher’s green-and-orange Gain No. 37 Chevy for JTG-Daugherty Racing didn’t win this weekend.

Highly distinctive though kind of tacky, David Ragan’s No. 38 was sponsored by Wild Alaskan Pollock this weekend, which meant gigantic fish covered the sides of his Front Row Motorsports Ford from headlight stickers to spoiler.

One race weekend left this season at Homestead-Miami Speedway, and then things settle down in the NASCAR world for a while until late January/early February.

A big wreck takes out Johnny Sauter in the Camping World Truck series race Friday night, and his teammate Justin Haley claims the championship, while Christopher Bell holds off Cole Custer to win the XFINITY Series title on Saturday.

All of the championship four drivers have won and excelled consistently this season, though none are especially well-liked. The least-popular win would be Joey Logano, and if Truex wins the conspiracy theorists will be out in full force again.