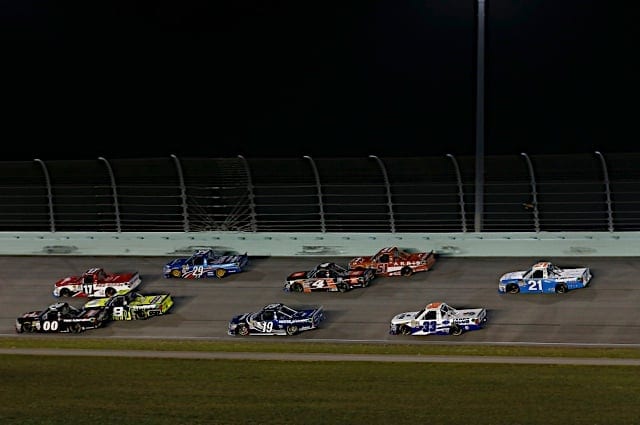 The NASCAR Camping World Truck Series rolls into Homestead-Miami Speedway this weekend (Nov. 16) for the final race of the season: the Ford EcoBoost 200. The series will crown either Johnny Sauter, Justin Haley, Brett Moffitt, or Noah Gragson as the 2018 champion.

31 trucks are entered this week, which means all drivers will race. There are several driver changes to note.

Ray Ciccarelli will once again strap behind the wheel of the No. 0 for Jennifer Jo Cobb Racing.

Owner-driver Cory Roper hops back in his No. 04 for the Roper Racing Team. In his first season, Roper has made five starts, with a best finish of 13th at Martinsville Speedway in the spring.

Reid Wilson will replace Stefan Parsons in the No. 15 for Premium Motorsports, while Tanner Thorson will pilot the No. 20 for Young’s Motorsports.

Jeb Burton will drive the No. 30 for On Point Motorsports. In his only other start this season, Burton finished 15th for the team at Martinsville Speedway three races ago.

Robby Lyons returns to the series to drive the No. 33 for Reaume Brothers Racing. Lyons finished 14th at Talladega Superspeedway in his last start.

Brennan Poole will once again team up with NextGen Motorsports to wheel the No. 35. The team will be without several key team members including crew chief Ryan Bell because of a penalty suffered at Texas Motor Speedway two races ago, which was the team’s debut race.

Dirt racing star Chris Windom will drive the No. 54 for DGR-CROSLEY. Windom has one career start at Homestead-Miami Speedway, which came last year driving for MB Motorsports.

Finally, Todd Peck returns to the seat of the No. 83 for Copp Motorsports, while Jesse Little will pilot his own No. 97.