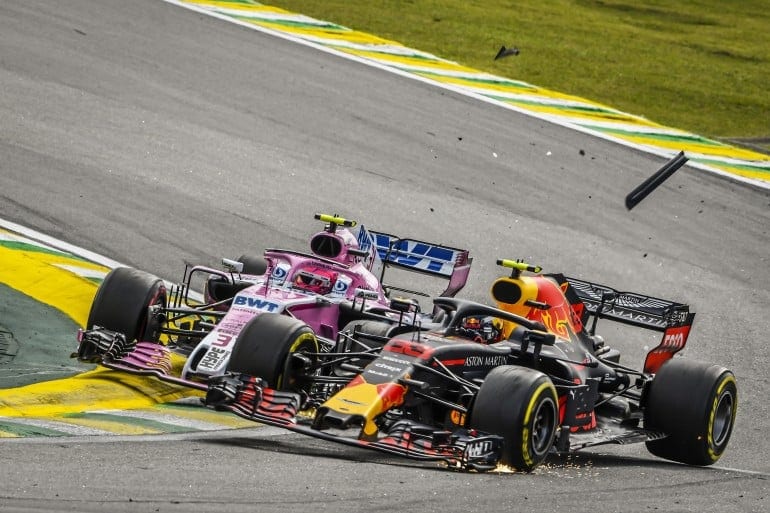 This past Sunday, the Brazilian Grand Prix (Nov. 11) featured a rather rare event.  While the commonplace came to be with Lewis Hamilton winning and Mercedes clinching the Constructors Championship, there was a skirmish on track that manifested itself in the post-race weigh in and has continued to linger in the press.  For the first time since Jos Verstappen took out leader Juan Pablo Montoya in 2001, there was a battle from a backmarker with the driver in first that affected the outcome.

At Interlagos, Esteban Ocon sought to unlap himself by passing leader Max Verstappen.  The two drivers, showing every element of obstinance that a competitor can, raced hard into turn two, with Ocon first holding an edge then losing it as Verstappen had the preferred line.  But neither was ever clear of the other.

As they raced into the ess, Ocon held his position and forced contact with Verstappen, spinning out both drivers in the process.  Verstappen lost the lead. Ocon earned a 10-second penalty. Both drivers finished the race with red mist flowing from their ears.

After the drivers left their cars and arrived at the weigh-in, Verstappen shoved a smiling Ocon – grinning, conceivably, at the fact that he had irritated Verstappen so much.  While the physical confrontation was hardly one of a brawl, these kinds of moments are rare in F1 as drivers frequently slam one another in the press and enjoy the drama of it all.

That Ocon is without a ride for next year may have been part of his ʻwhateverʻ attitude.  That Verstappen has a propensity for making curious on-track moves and displaying a mercurial emotional composition may have been fuel for his actions.

The entirety of the situation leaves one with a question as to what to make of it.

One way to acknowledge it is to argue that Ocon had every right to race Verstappen as hard as he could to get back on the lead lap.  Gaining that position looks good for his current team and any prospective employer. It also is part of the problematic notion of pride, which can be beautiful at times.

Another way to look at is through logistics and argue about the preferred racing lines and who was where and that the faster car could have used DRS in short haste to claim the upper hand on the other driver.  That the performance of the Red Bull was going to be noticeably better, in the long run, should also be factored, but for a moment, Ocon had a car worthy of competing with the driver who was, at that time, the class of the field.

Then we can look at it from Verstappenʻs perspective and ask what it was he really had to gain by pressing the issue when he did.  Knowing that he had the faster car, he could, or should, have just waited to pass Ocon when it could be done with relative ease. Verstappen held a two-second lead over Hamilton and was in control, so any threat was purely imaginative.

So it seems that the sum total of the occurrence is that everything would have sorted itself with a certain cleanliness in short order.  Racers, usually, are not known for their patience.

While the stewards gave Ocon the penalty and then tapped Verstappen for ʻcommunity serviceʻ (whatever the hell that may be), there seem to be equal parts blame and stupidity to go around.  Such a statement seems to be fine and deals with the gist of the matter.

Such a tidy summary, however, misses the best point of all.  In a season when the Drivers title is already clinched, Verstappen-Ocon serves as great theatre.  For F1, the penalties are a silly side story. The bigger story is that everything about the incident is sellable.

The sport, with its viewership ratings sliding down slightly in many parts of the world, now has a story to sell for the finale for a race that would most likely have been ignored.  One race, however, is just one little thing. Thereʻs a bigger picture in play.

While Ocon may be gone, Verstappen is the future.  Even driving for Red Bull, whose performance has not consistently matched Mercedes or Ferrari, Verstappen has found pace and used every opportunity he can to turn those moments into successes – when heʻs not losing his mind and going off the rails.

Sebastian Vettel may have been the best option to provide a challenge to Hamilton this year, but itʻs Verstappen who is poised to challenge Hamilton in the near future, and it is Verstappen, aged 21, that looks poised to become the proverbial face of the sport.  Red Bull has committed themselves to the young driver and are seeking to do for him what they did for Vettel when he was with the organization. This decision is one of the reasons that current teammate Daniel Ricciardo is moving to Renault for next year. Even the switch from Renault to Honda engines is made with Verstappen in mind, as Red Bull hopes to become the primary focus on a power unit that continues to show improvement after their debacle with McLaren.

Whatever you make the thing of what happened in the Brazilian GP, F1 is likely thrilled about it as it gives them something to sell in the offseason, showcasing both Verstappenʻs driving ability but also his emotional makeup, allowing him to become a reality show unto himself.  The marketing department is licking their chops.