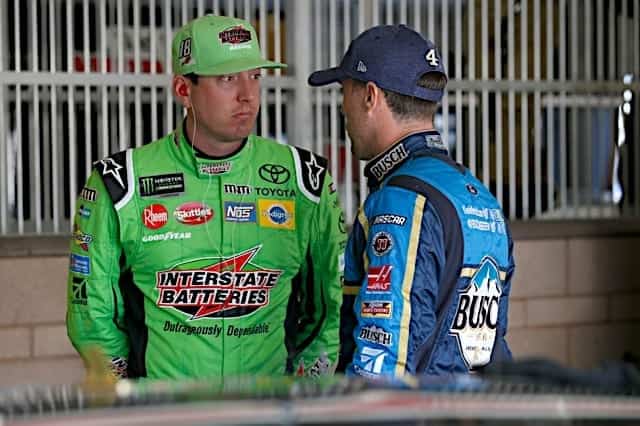 Kyle Busch won the race at ISM Raceway in Phoenix this past weekend to advance to the Championship 4 at Homestead-Miami Speedway. But given that he was already set to advance on points, he faced a peculiar situation late in the race. Aric Almirola was trailing him and needed to win to advance. By winning, Almirola would’ve replaced his Stewart-Haas Racing teammate Kevin Harvick in the Championship 4.

Given his eight wins this season, Harvick is a much bigger threat to Busch at Homestead then Almirola would have been. This aspect raises this week’s question: Should Busch have let Almirola win the race to keep Harvick out of the Championship 4?

To be the best, you’ve got to beat the best.

Busch is a future NASCAR Hall of Famer. Despite his numerous wins in the former-Busch Series, he is not a ‘Busch’ league driver. Letting Almirola win so that Harvick doesn’t advance would be a cheap move because it would prevent the championship race from being a clash of the best drivers.

To truly be the best driver, you have to believe deep within your soul that you are better than everyone else. That’s why drivers always want to make the cars harder to drive — each one thinks they’re a better driver, and so they think theyʻll have the advantage. Had Busch made a move to keep out his fiercest rival, he’d be admitting that he doesn’t think he’s the best driver. Instead, Busch should welcome challenges from the best drivers to prove he is better than them.

Given the way the race played out, Almirola would probably not have won even if Busch had let him pass. Brad Keselowski was the fastest car at the end of the race and nearly passed Busch for the win. Unless Busch aggressively blocked Keselowski for second, Almirola would’ve been a sitting duck for the No. 2 car and Busch would’ve given a  win to a driver he doesn’t like very much.

Even if Almirola had managed to win by way of Busch’s charity, what’s to keep Harvick from returning the favor the following week and keeping Busch from winning the championship. If someone did something intentional to keep me from racing for a championship, then my goal would be to make sure they didn’t win it either, by any means possible. Harvick’s not exactly the nicest guy in the garage — Busch doesn’t want to poke the bear.

Also, NASCAR could’ve potentially penalized Busch for letting Almirola win. NASCAR has a rule — though rarely enforced — where drivers must give 100 percent. The only time I’ve seen NASCAR do something about a driver not giving full effort was after the fall Richmond Raceway race in 2013, or “SpinGate,” as it’s come to be known. Clint Bowyer, Brian Vickers and David Gilliland each had incidents where they didn’t give 100 percent in order to tamper with the results so that Martin Truex Jr and Joey Logano got into the playoffs and Ryan Newman and Jeff Gordon wouldn’t.

As a result of the incidents, NASCAR issued a penalty that kept Truex out of the playoffs and put Newman in. It also added a 13th playoff spot (there were only 12 at the time) for Gordon. That was only five years ago, so who’s to say NASCAR wouldn’t step in and do something about Busch letting Almirola win? NASCAR could’ve either added Harvick as a fifth contender at Homestead or penalized Busch so many points that he was left out of title contention. With NASCAR, you never know what it will or won’t penalize, so why risk it?

Busch made the right move by going for the win, and as a result, he has one more win on his legendary resume and tons of momentum heading into the championship race. That’s far better than eliminating one your toughest competitor. -Michael Massie

Race teams are notorious for overanalyzing situations. They are constantly on the lookout for gray areas. They will go to extreme lengths for the slightest advantage, even if what they do might seem a bit unorthodox.

So why would it have been such a terrible thing for Kyle Busch to allow Aric Almirola to claim the win on Sunday at ISM Raceway? Almirola needed to get a win to advance and it would have knocked Kevin Harvick, Busch’s strongest competition for the title, out of the Championship 4.

First, Busch has already proven himself capable of beating Harvick. He’s done so plenty of times this year. Implying that Busch is scared or somehow doesn’t feel confident that he can win is nonsense.

This is all about strategy. Harvick is strong on 1.5-mile tracks. He has won at Homestead, and another win on Sunday will ensure that Harvick, not Busch, will get his second title. On the contrary, Almirola has never won at Homestead. His best finish there is fourth in 2010 after he took over at Richard Petty Motorsports for a recently departed Kasey Kahne. He hasn’t finished better than 16th the last five years at the South Florida track.

It’s not difficult to decide who a fellow driver would rather face in a head to head battle for the title.

Formula 1 champion Alain Prost was known to sometimes limit the points his rivals could attain. For example, if he was running 10th (the final spot in an F1 race that is awarded points) and a rival was coming up through the field, he would purposely remain tenth to keep his competitor from being able to score a point. Such antics earned him the nickname “The Professor” because he was always analyzing how he could manipulate scenarios to best suit him. This is no different.

In any sport, teams contending for a championship would undoubtedly prefer to face competition that they feel capable of beating. There isn’t anything to be gained simply by playing a stronger team. They just want to win. Moral victories don’t come with a trophy.

Of course, the inevitable cries of foul would be swift and thunderous. So I’d recommend that anyone employing such a tactic not be too liberal with who they share the secret with. A driver absolutely should not come out and say that they purposely threw a race to another driver. But in this instance, I can understand why Busch might have chosen to do so.

I’m not suggesting drivers should rig races week in and week out. But it certainly would have worked to Buschʻs benefit had he allowed Almirola to take the win on Sunday. Harvick would now be out of the title hunt.

Busch claimed that he’d rather face Harvick. He implied that the championship glory would be greater having beaten the best car and team on the track this season. If he finds himself watching the No. 4 Stewart Haas Racing team celebrate on the stage with the big trophy on Sunday night, I’d be curious to know if he still feels that way.

My guess is no. -Frank Velat

Yes, Kyle should have made it look like Aric made a legitimate late race pass and then Kyle is good enough to hold Brad back just long enough. All that just to really piss Harvick off and knock him out. But Kyle couldn’t make himself do it. He’s a true racer and flat out gives it his all because he loves to win. I would have loved it though..
Now Harvick can bring his tricked out car to homestead.

All four will take tricked out cars but we’ll never know the extent of the improvements. But we will know who did it best.

It doesn’t really matter what happened in Phoenix. The point is that it will happen eventually. Perhaps if the driver was a team mate or someone with whom Kyle was good friends (if that’s possible) that may have tilted the balance. Removing one of the favorites for someone with a less dominant car would be a viable strategy to increase his own chances of being champion.

This is all you’ve got to write about?

Only Hendrick’s losers would do something like that. Nascar tried their best to get buttsucker Elliott in so a Chevrolet would be in final four.

Now that MWR is long gone.

Okay okay okay. THIS DUDE KEVIN HARVICK should race hard enough to where he doesnt have to worry about my boy Kyle letting someone else win the race. Maybe he should hit the upgrade button on his spoiler again so he doesn’t have to come in 5th again. lol. See ya at Homestead you arsehole. Can’t wait to see Harvick win the race and celebrate and then have it taken away on Tuesday.

In order to win the championship, Kyle has to beat three other drivers. One would expect Harvick to supply the strongest competition. So, Harvick needs to be eliminated. It would have caused an uproar if Kyle had let Almirola win. But it would still have been a smart move strategically.

But, it’s not in Kyle’s dna to roll over for anyone when he’s got a win in his headlights.

Do you all not recall MWR And the LATE RACE ACTION PENALTY. Not A Busch fan but he was smart. Nascar took
away Truex from Chase and inserted Newman.

I am surprised NA$CAR didn’t find a way to get the love child in. Hoping for a Truax stuff of Logano.
Kyle and Kevin have been the two best all year hope it is between them.