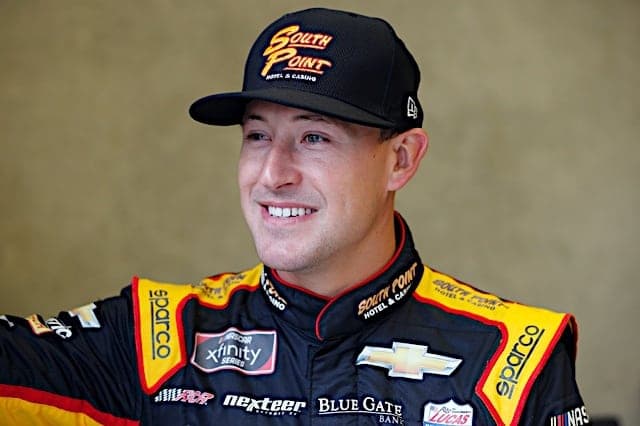 On Saturday afternoon, Richard Childress Racing’s Daniel Hemric is looking to make amends.  Last year, Hemric raced his way into the Championship 4 and qualified well for the Ford EcoBoost 300.  Then, the battery turned traitor early in the race.  That was curtains for any chances Hemric could have had at the title.  This year, he’s got that experience in his back pocket.

“We know how to make speed here [at Homestead],” Hemric stated during his media availability Thursday.  “We know to pay attention to the little things that you have to do in order to be a serious championship contender.  We just have to execute on all forms, from myself to pit road, pit calls and the technical side of it.

“Last year, I felt that we put ourselves in the best position throughout practice [and] the beginning stages of the race,” Hemric continued.  “We were leading the Championship 4, but that obviously wasn’t enough.  [All we can do] is make sure all the i’s are dotted and the t’s crossed.  [We’ll have to] make sure that at night as the sun goes down, we’re the best we’ve been all weekend to give ourselves a shot.”

Yes, Hemric was in last year’s Championship 4.  He doesn’t view that experience as a true advantage for himself, though.

“We’re thankful that we’ve been through the emotions of it,” Hemric stated.  “At the end of the day, when we go racing Saturday afternoon into the night, we’ll all there to race.  These guys are incredible racers, especially the three guys that we have to compete directly with.  They’ve all been in high-pressure situations all through their time as racers just as much as I have.  Everybody’s game is going to be elevated to a different level.”

For Hemric, Saturday will be his final race full-time in the XFINITY Series with Richard Childress Racing since he’s headed to RCR’s No. 31 in the Monster Energy NASCAR Cup Series in 2019.  That said, he’s not closing the door on more XFINITY Series exploits in the future.  As of now, he’s not really sure about future plans in the series.

At 65 starts, Hemric has the second-most starts in the XFINITY Series of the Championship 4 contenders (Cole Custer has 70).  However, at 27, he’s also quite a bit older than his opposition and more mature.  He’s grown as a driver in the past couple of years.

“I’ve grown substantially [as a driver],” Hemric noted.  “To have an outlook of what you want to get out of life and what it takes to get there is one thing.  Once you’re there, the work ethic it actually takes to stay here, to be successful and continue to build [on your career].   You have to do a lot of soul-searching to figure out how to get through those tough days and how to balance the really good days.  I’ll promise you, the local short track racers that are plenty talented enough to race on this level; there are a ton of them throughout this country, but they’ll never fully understand what it takes to stay here at this level.  My mindset…has been opened up substantially and has allowed me to grow as a person and as a driver.”

In addition to his time in the Camping World Truck and XFINITY Series, Hemric also credits his time racing in super late models against drivers such as Bubba Pollard, Jeff Choquette and Augie Grill for molding his skills on the track.  It will be experience such as that that will come into play when the cards are all laid down.