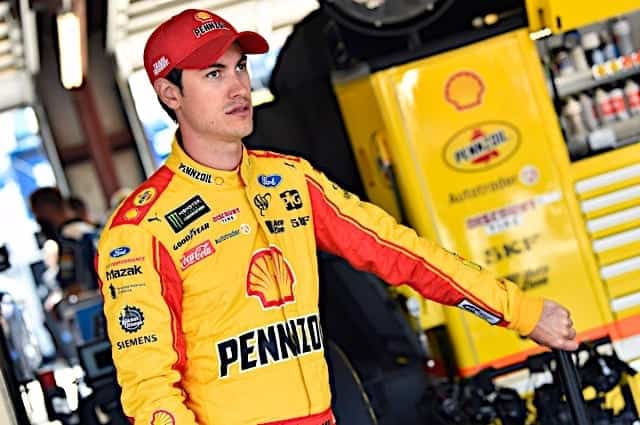 2017 was a tiring year for Joey Logano, coming off a 2016 season in which he finished runner-up in the championship. The past 15 weeks has been the confidence booster the No. 22 team needed to make a run for this years title.

Logano, 28, will be competing in his third championship race since the current playoff format began in 2014. But earlier this year, he wasn’t sure the No. 22 team could make it to Homestead-Miami Speedway with a shot at the championship.

Sure, Logano had eight top-10 finishes in the first nine race of the season, winning his first race in over a year at Talladega Superspeedway in late April. But an up-and-down summer stretch, had the Connecticut native believing the team needed more speed to be a serious contender.

Since then, the No. 22 has found that speed. As for Logano’s confidence? That’s back, too.

“The pit crew has been on it, getting the race win [at Martinsville Speedway, Oct. 28] was probably the most important one all year to get us ready for Miami. How do you not feel confident in that? You’ve got to feel confident in yourself or else you’re wasting your time out here.”

Since the playoffs began in mid-September, Logano has been on a bit of a tear, winning at the aforementioned race at Martinsville, with six additional top 10s. The races outside the top 10 were last weekend at ISM Raceway where the No. 22 cut a left rear tire, though the pressure was off due to the victory at the paperclip. In the first round at Richmond Raceway, the team ran in the back half of the top 10 the entire race, though finished 14th.

But stepping up in the postseason is what the elite drivers do, right?

“It’s what the playoffs are about. It happens in all sports,” Logano said. “You’ve got to race for wins when it’s most important. We raced without many playoff points, so we had to. We didn’t have anything to fall back on, so we had to go, and we did. It took us a long time to get to this point, but now I feel like we are back to where we were a couple years ago when we can compete, lead laps, which turns into race wins quite often.

“I’m proud of what we’ve been able to do because last year was hard, really hard. It stings. It’s tough. We were able to stay together, finding something here, finding something there. It doesn’t happen like a light switch. You go down really quick and it’s hard to crawl your way back up.”

Unlike 2017, Logano has been among the six in points all season long, the only driver that can claim that feat in the Monster Energy NASCAR Cup Series. But this year is about redemption.

“If you finish second in the points, making the playoffs is a give, ‘that’s going to be easy’,'” he said. “We quickly found out that it’s not a given, and it’ a little harder than you think. We learned a lot last year as a team, we dug hard and we’ve slowly scratched and clawed our way back to where we are. Back to where we are didn’t come until about 10 weeks ago.”

Joining his championship competitors this year (Martin Truex Jr., Kyle Busch and Kevin Harvick), Logano has been among the most successful drivers under the current playoff format. And he’s learned many lessons from his first bout in 2014.

Logano said: “I probably learned more from the first one in 2014 than anything because you don’t know the whole week leading up to it. You don’t know how you’re going to prepare as a driver. You’re thinking about it, ‘oh my gosh, I got a shot to win a championship. This is going to be a life changing thing. I don’t want to blow it. I don’t want to screw this up.’ I overthought that part a lot the first year. In 2016, I was may more prepared and relaxed. When you’re more prepared, you’re more relaxed and you know what’s coming.”

In Logano’s career at Homestead (nine races), he has an average finish of 14.9, the worst of the Championship 4 drivers.