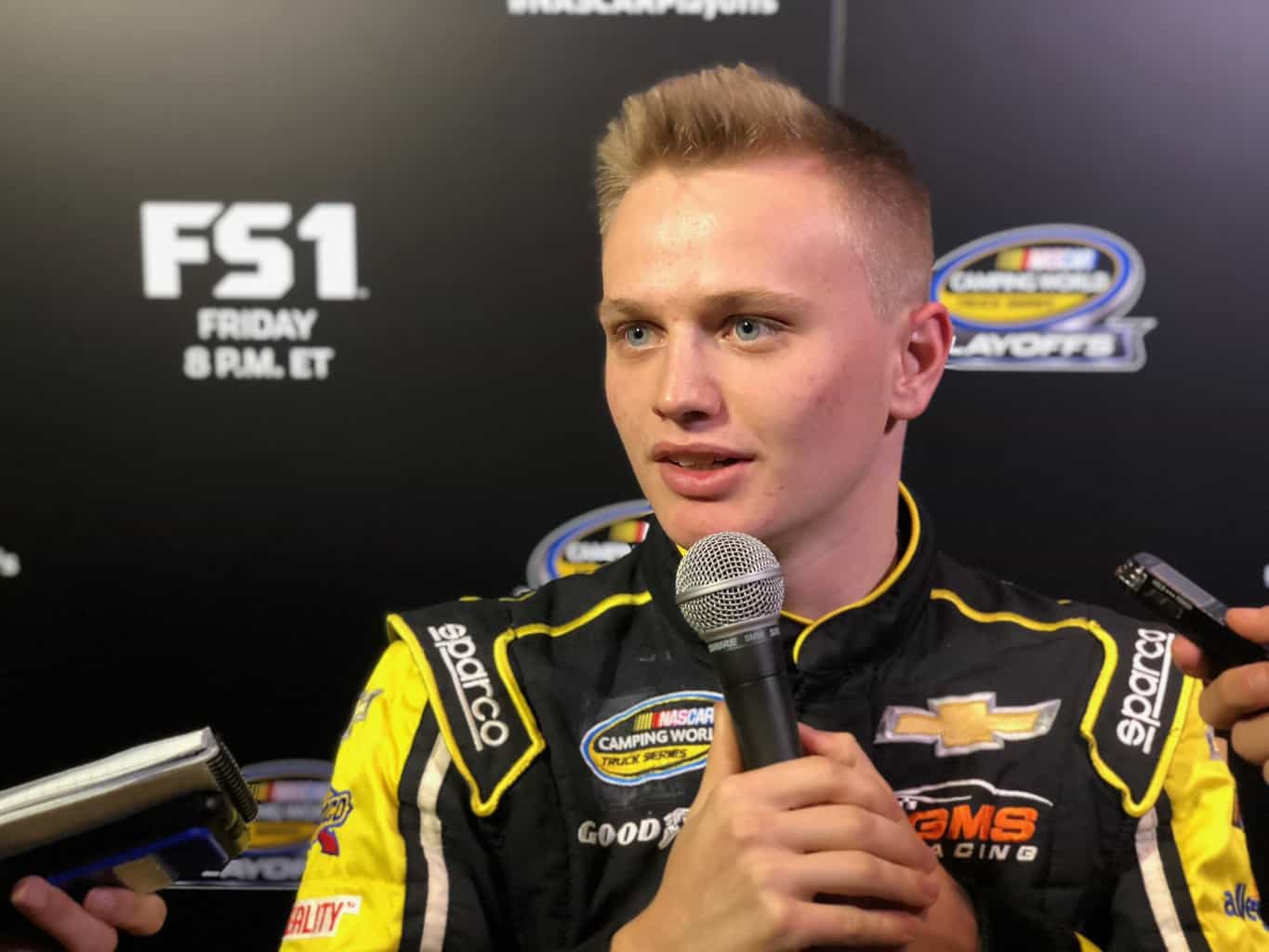 Justin Haley while being interviewed at Championship 4 Media Day at The Miami Beach EDITION on Thursday, November 15, 2018. (Photo/Davey Segal)

Justin Haley is driving with a chip on his shoulder, and he wants you to know it.

“It’s dark horse,” Haley said jokingly while correcting a reporter who called him an underdog. But Haley’s performance thus far in the NASCAR Playoffs has been nothing short of in-your-face-impressive.

With 17 top 10’s and nine top five’s to date in 2018, the Indiana native has plenty to hang his hat on this season, especially the postseason. Going into last weekend’s penultimate race of the season at ISM Raceway in Phoenix, AZ, his average finish in the playoffs was a whopping 3.0, with two victories.

This weekend at Homestead-Miami Speedway (8 p.m. ET, FS1), he gets a chance to race for a championship.

“I’ve got no pressure,” Haley said of the impending title race. “I wouldn’t say I don’t care how this weekend goes, but however it goes, I’m going to be pretty okay with it. We’ve put ourselves in position to win a championship and if we work together and get the No. 24 truck into the Championship 4, that’s all we can really ask for. Just the opportunity to compete for a championship. I’m just looking at it as a normal race, and I’m not lying to you. I’m going to strap in and whatever happens, happens.”

Leading up to the playoffs, Haley was solid. But not overly impressive. Five top fives and one win (Gateway) was what the box score showed in terms of the No. 24’s performance. So why the sudden change?

“I think the XFINITY races in general was my turning point,” Haley said. “I got the opportunity to go to Iowa for my series debut. It was an okay day, I was disappointed in it. Would’ve liked to be in the top 10. But I didn’t even have any XFINITY races planned at the beginning of this year. I thought I was just going to be running for a truck championship and I was content with that.”

Daytona International Speedway’s event was another event Haley mentioned in his mid-season turnaround. After diving below Elliott Sadler and Kyle Larson coming to the checkered flag for the win, NASCAR penalized him for going below the yellow line, taking the win away.

“After Daytona and kind of proving to myself, my sponsors, my family, my team, that I can win an XFINITY race, not only a Truck race, that meant a lot to us,” he said. “I’d probably say that’s the turning point and we’ve been good ever since.”

But good isn’t great. And even great isn’t championship-caliber. Add in the renewed confidence from the driver behind the wheel, experience from the man atop the pit box and an unquestioned drive from the employees at the shop, and you have your driver in contention at Homestead-Miami Speedway for the title.

“It’s a combination of a lot,” Haley said of the second-half surge. “Probably those XFINITY starts … I think it helped me to go up there run the faster cars, get the experience with the more developed drivers. I contribute that a lot of it. But as a team, we found a better package with our trucks. What we were doing at the end of 2017 we’ve been doing a lot this year. We found good speed. The package we have, the setup that we bring, the time and wind tunnel work we do now is more excessive that we do now is a lot more.”

The 19-year-old faces a tall task though, one coming in the form of his teammate and 2016 series champion Johnny Sauter, who has amassed six wins this season and 14 top-five finishes.

“Johnny never sees himself as the top dog and that’s just Johnny,” Haley said of his GMS Racing teammate. “He never gives enough credit to himself. He’s obviously very fast. He’s had the best season, the most wins and he’s the only past champion going into the Championship 4. I think he’s the favorite, but that’s Johnny for you.”

“Being teammates, that helps a little bit. Me and Johnny have created a relationship outside the track and a friendship and bond that’s pretty close. I can go and lean on him for anything I need. And vice versa. We’ve always been pretty cool with each other. We’ve had our differences at times but always made up. I’ve been fortunate to learn from Johnny the past couple years.”

The man atop the pit box has also played an integral role in Haley’s maturity and performance jump this season. Kevin Bellicourt, who also called the shots for Haley in his 21 NCWTS races last season, is the man that steers the No. 24 ship.

“Maturity wise, we’ve both grown,” Haley said. “I’ve got a good group of guys with me and Kevin Bellicourt, who’s really set a high standard for us all. I think it’s pushed us all to be better than what we were. I can put a race together now, and I couldn’t last season because I didn’t have any race wins. I’ve been in a few XFINITY races and the endurance standpoint from it.”

Haley isn’t new to championship battles, though. He won the 2016 NACAR K&N Pro Series East title, and admitted even then, he thought about what could be before the eventual occurred.

“You always think about it when you’re in this position,” he said of winning a championship at this level. “You can’t lie about it and say you’re not. I thought about it a lot when I was running for the K&N East championship as well. It’s one of those things where you never know what’s going to happen tomorrow night. Your motor can blow up lap 1.”

Even if lady luck isn’t on Haley’s side this weekend, he and the No. 24 team are planning on enjoying the drive. Because the ride that got them here was anything but east, but externally rewarding.