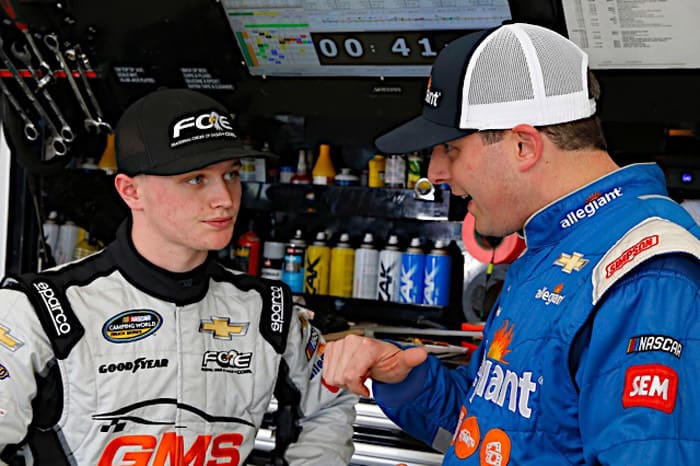 Friday night, the NASCAR Camping World Truck Series will crown its 19th series champion, and it comes down to four drivers, racing for all the marbles. Johnny Sauter, Brett Moffitt, Justin Haley and Noah Gragson, who have a combined 15 wins in 22 races, will fight it out, head-to-head for this year’s title.

It’s a case of the veteran versus the youth movement this weekend. Sauter, who just turned 40 this year, faces off against a 19-year-old in Haley, a 20-year-old in Gragson and a 26-year-old in Moffitt.

Sauter, who won the 2016 championship in his first season with GMS Racing, clearly has the edge when it comes to experience. With more than 240 Truck Series starts spanning his 15-season career, the driver of the No. 21 has six victories this season, along with an impressive 14 top fives and 17 top-10 finishes.

Additionally, Sauter has 11 starts at Homestead-Miami, including a victory that during the 2011 season. He also has four straight top 10s at the mile-and-a-half oval, including back-to-back third-place results in the last two seasons. Based on experience and overall numbers alone, you have to give the edge to Sauter becoming a two-time series champion Friday night.

Meanwhile, Moffitt has the least amount of series experience with just 35 starts after he was sidelined when Red Horse Racing shuttered its doors just five races into what was supposed to be a full-time 2017 campaign with the organization. Driving for the little team that could, Moffitt has taken his Hattori Racing Enterprises organization all the way to the Championship 4 after it narrowly missed making the playoffs last season with Ryan Truex at the helm.

Moffitt hasn’t seen nearly the consistency this season that Sauter has. With five victories in 22 races, he only has 12 top 10s, all of which were top-five finishes. His lone DNF this year came in the season-opener at Daytona, though he failed to finish on the lead lap in seven races. Moffitt’s Truck Series experience at Homestead is non-existent as well, though he does have a pair of Monster Energy NASCAR Cup Series starts at the mile-and-a-half oval, both of which came for backmarker teams.

That’s not to say Moffitt can’t win the championship. In fact, he certainly can. With two mile-and-a-half victories to his credit this season in a year that’s faced all sorts of sponsorship uncertainty, the driver of the No. 16 Toyota has what it takes to fight for the title. He’s just going to need to go through Sauter to win it.

Then, there’s the curious case of Noah Gragson. Largely overshadowed by former teammate Christopher Bell’s success last season, many pointed at the 20-year-old to have a breakout year in 2018 Instead, it’s been a story of silly mistakes or failing to pull into Victory Lane after a strong race that have plagued the driver of the No. 18 Toyota this season.

Though it seems like he should have more than one win this year, he has the single trip to Victory Lane at Kansas Speedway in May to highlight a season that’s seen him score six poles, seven top fives and 16 top 10s en route to improving his average start and average finish over last year. Don’t forget he was also forced to miss at Pocono earlier this season due to an illness, though NASCAR obviously allowed a medical waiver, allowing him to compete for the championship.

Gragson has two previous starts at Homestead, though neither one of them resulted in even a top-five finish. He ended 2016 with a 15th-place result, while his rookie campaign last year came to a close with a disappointing 18th-place finish, three laps down. With that said, you can bet Kyle Busch Motorsports would love nothing more than to take home back-to-back titles (Bell last season). Plus, it would be a pretty nice send-off for the driver who’s headed to the NASCAR XFINITY Series to compete for JR Motorsports next season.

As the youngest driver of the bunch, Haley has had a breakout season with GMS Racing. In his sophomore campaign, the driver of the No. 24 Chevrolet scored his first career victory at Gateway Motorsports Park and has since added two more wins at Canadian Tire Motorsports Park and Texas Motor Speedway. Additionally, he boasts nine top 10s and 17 top fives in his first true full-time season in the Truck Series. Last year, he didn’t race at Daytona or Atlanta due to NASCAR’s age restriction.

In his only start at Homestead-Miami, Haley started seventh and finished ninth. A strong option to fill GMS Racing’s No. 23 Chevrolet in the XFINITY Series, a title would certainly give an added boost to that possibility.

You can easily make a case for all four drivers to win the championship, and it’s clear they deserve to be where they are, as the other four competitors who qualified for the playoffs scored just two wins all year. We all know that Homestead can get a little crazy, especially with a title on the line, but I’m leaning toward the veteran experience in Sauter as the favorite.