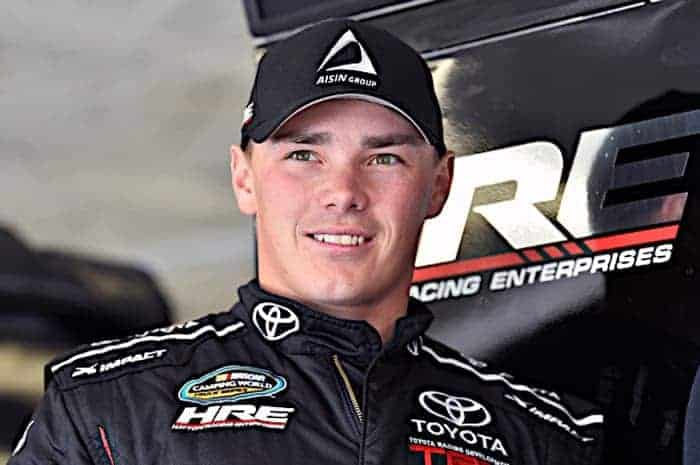 He ended it a NASCAR champion.

Moffitt cruised to victory in the Ford EcoBoost 200 at Homestead-Miami Speedway, earning the series championship in the process. It’s his sixth win of the year and first title in any NASCAR division.

“It’s unreal,” he said. “I wasn’t sure if we were even going to compete for a championship even after our first win. We have a lot of partners that came in at clutch moments and got us to the racetrack when we needed them to.”

Noah Gragson, his closest competition for the championship, wound up five seconds back in third after a poor pit stop in the final stage. He came out on track four seconds behind Moffitt and was simply unable to close the gap under green.

To his credit, Gragson blamed himself, not the pit crew, for poor adjustments that also kept him from contending down the stretch.

“I need to do a better job,” he said. “It just wasn’t meant to be. On the bright side, racing for a championship, I never dreamed of that six years ago.”

The other Championship 4 contenders, Justin Haley and Johnny Sauter from GMS Racing, were never in contention. Both suffered through serious handling problems with Sauter’s truck falling outside the top 10. Complaining of a loose condition, Sauter’s team threw some major adjustments at it during two yellow-flag pit stops. But the truck never came around and Sauter wound up 12th, missing out on his second Truck title in three years.

“We laid an egg tonight,” he said, before joking he’d go back and have a 12-pack of Bud Light. “We just didn’t have it.”

It was also the first title for Hattori Racing Enterprises in the Truck Series. Car owner Shigeaki Hattori had to piece together sponsorship almost weekly to simply complete the full Truck schedule.

For the second straight year, this race ran without a caution other than stage breaks. Four trucks failed to finish, also below average for an event that historically has a lot of caution flags.