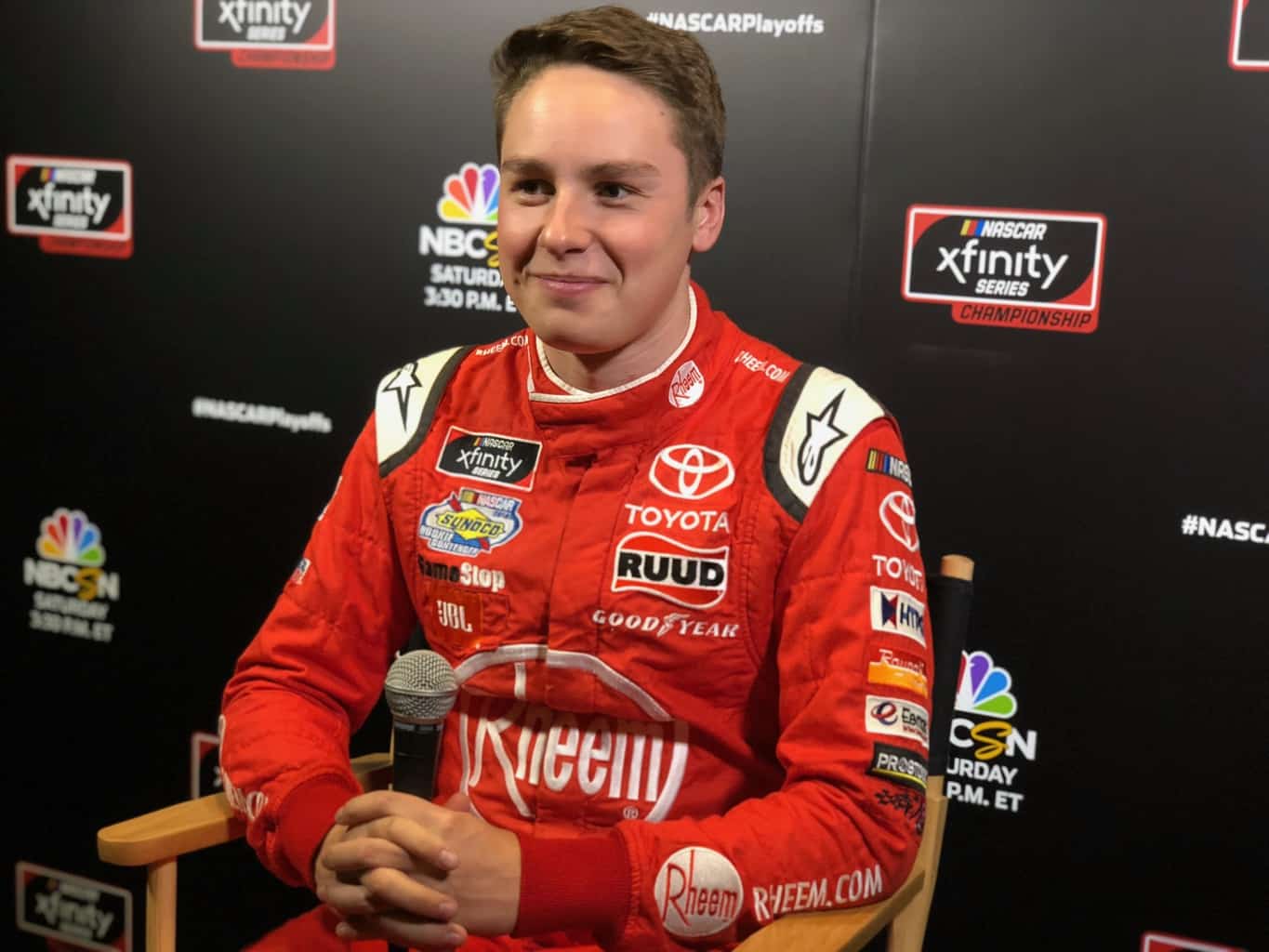 Christopher Bell while being interviewed at Championship 4 Media Day at The Miami Beach EDITION on Thursday, November 15, 2018. (Photo/Davey Segal)

“If it ain’t broke, don’t fix it” is a cliché, yet true motto in sports.

Christopher Bell is subscribing to that in this weekend’s championship race.

When the green flag flies on the Ford EcoBoost 300 (Saturday, Nov. 17, 4 p.m. ET, NBC), the seven-time winner this season isn’t seeking the win.

Instead, he just wants to beat the other three competitors he’s racing for the title.

“I don’t know what it’s going to take,” Bell said. “And I think if you ask the other three competitors, they don’t know either. Two years ago, the Championship 4 was really strong and competed for the win. Last year, the Championship 4 basically was competing for a top five. We don’t really know what to expect. The biggest thing, though, is that we all pretty much race each other.”

Bell has walked that talk, too. En route to his Truck Series championship last season, he finished second, not pushing the issue down the stretch for the win. While Chase Briscoe pulled away, Bell assured himself of the title by simply keeping his main competition in the rear-view mirror.

“For my situation last year in the Truck Series, I felt like I had a Truck that was capable of winning the race,” Bell explained. “But my competitors were fourth, fifth and sixth. I wasn’t going to risk my chances of going up and taking the lead when all I had to do was run third, or right in front of them. I think if all of us are a little behind, we’re not going to push hard to win the race. Just to beat each other.”

Bell, unlike Tyler Reddick, Daniel Hemric and Cole Custer, is the only driver in the Xfinity Series Championship 4 to have a NASCAR national series championship under his belt.

“I don’t know if winning the championship gives me an advantage,” Bell said. “But the fact that I was in the Championship 4, I understand the process, what the pressure is like racing for a championship. I think being in that situation has it’s advantages and hopefully I can use that.”

Bell’s dominant season, off a five-win 2017 for Kyle Busch Motorsports in the Truck Series, comes in part thanks to crew chief Jason Ratcliff. The series veteran has called the shots for Bell’s former boss Kyle Busch, who called him “the best crew chief in the garage,” according to Bell.

“It was actually pretty funny,” the Norman, Okla. native recalled. “Coach (Joe Gibbs) was wandering around (the shop) and was a little bit worried about the Cup deal because they haven’t been running that great. But then he looked at Jason and said, ‘I’m not worried about you guys, you guys are in good shape,’ and that was even after Texas. He’s been super supportive and believed in us since day one and even after the Texas mishap when we got put in a must-win situation. That was cool.”

Bell has been compared to Kyle Larson, another dirt-track ace. Larson considers Homestead-Miami Speedway one of his best tracks but unfortunately, Bell doesn’t share the same sentiment.

“I wish I could say it fits me really well, but I haven’t ran really great here in the past,” Bell said. “So I’ve got some work to do […] the only thing different going into this weekend is that we’re racing three cars. Instead go going out there and trying to win the race, I only have to beat three competitors. Whether that’s running 20th or winning the race, that’s going to be our goal. Just to beat those three guys.”

Bell would become the third Sunoco Rookie of the Year to win the title and the fourth to win both a NCWTS and NXS championship in their careers. After facing elimination due to crashes at Kansas and Texas, simply having a shot at hoisting the hardware on Saturday shows the perseverance of the No. 2o team.

But anything short of the title won’t cut it.

“This weekend, I could care less about winning the race,” he said. “I just want to win the championship.”