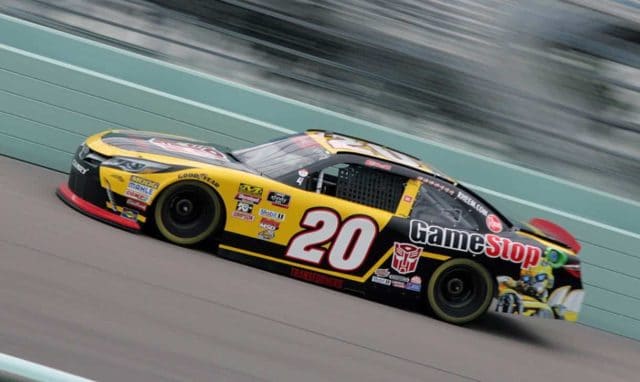 Of the four XFINITY Series championship contenders, it was Christopher Bell who was the fastest of all Friday (Nov. 16) at Homestead-Miami Speedway.  Bell turned in a lap at 167.193 mph on his very first lap in practice.  That held up for the rest of the day.

Bell’s lap was a tenth and a half of a second faster than Team Penske’s Austin Cindric.  It was nearly another two-tenths of a second more back to Richard Childress Racing’s Daniel Hemric in third.  Stewart-Haas Racing’s Cole Custer was fourth, while John Hunter Nemechek was fifth.

JR Motorsports’ Elliott Sadler, who was quite perturbed after a parking pass/credential issue Friday morning, was sixth quickest.  Teammate Tyler Reddick was the slowest of the Championship 4 in seventh, followed by Ryan Sieg in the No. 38 Chevrolet.  Matt Tifft and Kaz Grala were ninth and tenth.

15 different drivers during the session completed 10-lap runs.  Nemechek was the fastest of those drivers with a 15-mile average speed of 162.254 mph.  Bell was second, followed by Reddick, Ryan Preece and Brandon Jones.  The top seven drivers on the 10-lap average chart did their 10-lap runs the first time out of the garage.

The practice session had no caution periods, but there were encounters with the SAFER Barrier.  Carl Long may be trying to sell his Dodge Challenger, but he didn’t do himself any favors by kissing the wall.

In Happy Hour, held under the lights, it was Roush Fenway Racing’s Ryan Reed that was fastest with a lap at 166.451 mph.  That lap was five-hundredths of a second faster than Cindric.  Sadler was third quickest, followed by Reddick, the fastest of the Championship 4 in fourth.  Bell was fifth.

21 of the 40 drivers that took time completed 10 consecutive laps on-track during the session.  Of those drivers, Bell was fastest with an average speed of 163.311 mph.  Custer was second, followed by Cindric, Reddick and Nemechek.

There was one brief red flag early in the session when Caesar Bacarella stalled his Alpha Prime Chevrolet on the warm-up lane.  Bacarella was pushed back to the garage area and eventually returned to the track.  He ended up 27th quickest in the session.

There was wall contact as well.  Custer managed to brush the wall with his HAAS Automation Ford Mustang late in the session.  Also, at the same time that Bacarella stalled his Chevrolet, JP Motorsports’ Bayley Currey hit the wall in his Toyota.

With 45 teams entered and only 40 spots available in the starting lineup, the race to get into the race should be quite brisk on Saturday.  Drivers that could have to step up in order to race include both JP Motorsports Toyotas (Currey and Josh Bilicki), Josh Williams, Tim Viens and Morgan Shepherd.

Qualifying for the Ford EcoBoost 300 is scheduled to start just after 12:30 p.m. EST Saturday afternoon.  The session will be aired live on NBCSN.