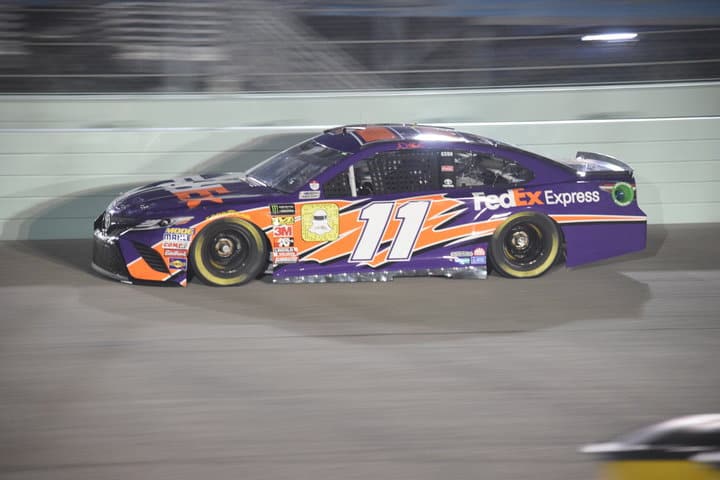 Denny Hamlin may not be running for a championship this Sunday (Nov. 18) at Homestead-Miami Speedway. But he’s still fighting for a streak that’s just as important to him: a trip to Victory Lane.

Hamlin has one last chance to extend his streak of going 12 straight seasons with at least one win in the Monster Energy NASCAR Cup Series. He earned the pole for Sunday’s Ford EcoBoost 400, eking out teammate Kyle Busch and the three other drivers competing for a championship.

“It was a good last round for us, we adjusted well,” he said. “Made a little tweak there at the end, in the final run, and it was enough. Definitely a great run considering the guys that are up front. They’ve got everything loaded for this weekend. Proud of our team and hopefully we can finish it off on Sunday.”

The pole, Hamlin’s second straight at Homestead, was bittersweet considering the future of crew chief Mike Wheeler. The driver initially fought back tears on pit road as he revealed the duo would be split up for 2019.

“The spot was always his, but it’s a performance business,” Hamlin said. “We had a rough summer, we had a rough start of the Chase, but then we started turning it up again. It’s a little frustrating, but I understand. A change is going to be made, and that’s all I can really say about it.”

Busch, who qualified the best of the four title contenders, was hoping Hamlin might negotiate for the No. 1 pit box earned by pole sitter.

“To be honest, my pit crew is a second slower than Kyle’s,” Hamlin said. “But everything is earned, nothing is given.”

That made a deal unlikely as of Friday night. But Saturday morning, the No. 11 team announced they have agreed to give up the stall to Busch’s No. 18.

Martin Truex Jr. was third quick in a solid, steady run for his Furniture Row Racing Toyota. Brad Keselowski sandwiched in between teammate and Championship 4 driver Joey Logano to round out the top five.

Kevin Harvick, after complaining of a tight condition on his Ford, was the worst of the title contenders in 12th. But he, along with the trio he’s fighting for the trophy, seemed content with his performance.

“We qualified 12th, not last,” he said in the press room. “It’s not that big a deal if we can get our car driving right.”

“I don’t think we’ve learned a whole lot about the race,” Truex added. “[Qualifying] anywhere in the top 10 or 12, it’s a long race. Long runs come into play and if you’re good, you can drive up from virtually anywhere in the field.”

For Hamlin, he now must maneuver around the Championship 4 drivers a second straight year. It’s a difficult position for him to be in, fighting against drivers with a title on the line as he also has plenty to gain himself.

“It stinks,” he said. “We come this weekend to win, whether or not we’re in the playoffs, and if you have to give up spots, you’re just conceding you’re not going to win. You saw it last year with [Kyle] Larson, where he ran those front two down, then backed off [allowing Busch and Truex to settle the title amongst themselves]. I’d have a challenge doing that this year, for sure.”

I wonder which Toyota/Gibbs driver will take out Logano, which one is to take out Harvick, and who gets the job of holding up Truex? My guess? Jones, Hamlin, and Suarez, in that order.

My hope is Baby Busch and Truex take each other out and Logano wins it.

Having the pole winner step aside for a teammate to have the 1st pit stall sucks but it isn’t surprising. I wonder how many will consider this a negative for the overall sport. All of the sudden it doesn’t seem far fetched that Busch could have let Almirola win last week to remove Harvick from the picture.

NASCAR by condoning this has not a clue as to why the fan base is pissed off to the high heavens about so many things. Could mean something, could mean nothing in the end. Why give people that chance to speculate? Seems Hamlin at first did not want to give it up. And the Phony type PREACHER MAN said give it up! How thoughtful of FEDEX…SARCASM. Now will NASCAR learn from this and not allow in the HOMESTEAD CUP RACE to allow a team to give up their first choice spot if a “teammate” (I hate that term) wins the pole? NASCAR is their own worst enemy!