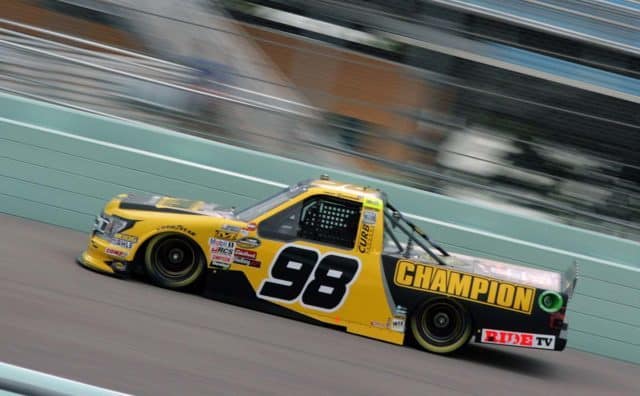 At the very last minute in Camping World Truck Series qualifying Friday (Nov. 16), ThorSport Racing’s Grant Enfinger turned in a lap at 169.348 mph to win the pole for the Ford EcoBoost 200.  It is Enfinger’s second pole of 2018.

“[The key to my lap was having a good Ford F-150,” Enfinger said after the session.  “Honestly, our truck has been driving good all day, even from when we unloaded.  We fell off a little bit more pace-wise in practice than we wanted to, but it still drove good.  It’s important here to know what you’re fighting.”

In regards to the Championship 4, Enfinger stated that he’s here to run his own race.  He doesn’t want to negatively affect the championship picture, but he’s still out to win.

Johnny Sauter qualified sixth, slowest of the Championship 4 drivers, but won’t be far from his competition at the start.  Niece Motorsports’ Ross Chastain will start seventh, followed by John Hunter Nemechek and Jesse Little.  DGR-CROSLEY’s Chris Windom will start 10th.

Coverage of the Ford EcoBoost 200 is scheduled to start with NASCAR RaceDay – CWTS Edition at 7:30 p.m. EST on FOX Sports 1.  Race coverage will follow immediately with the green flag flying at 8:15 p.m.