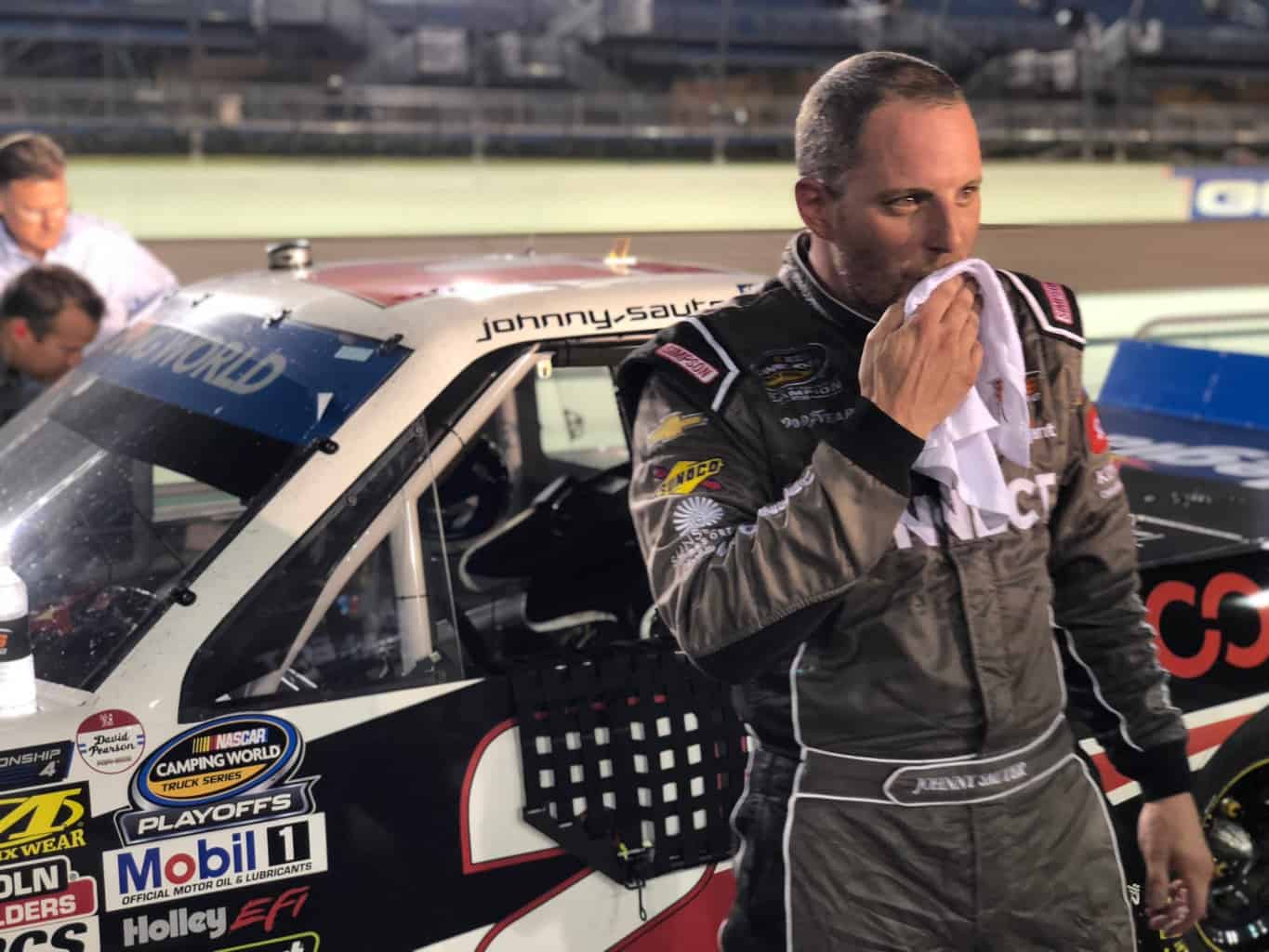 Although his contenders called him the favorite entering the weekend, the No. 21 GMS Racing Chevrolet limped home to a 12th-place finish, never having the speed to challenge for the Camping World Truck Series championship.

“We just missed it,” Sauter said on pit road. “I never would’ve thought we’d be that bad. Just want to apologize to all the guys at GMS, they deserve better than that for sure. We were just sideways loose. We were dropping the track bar, putting rubbers in the left rear, the balance was just never there. Even if we could get it tight enough, we would just start chattering the front tires across the center and still snap loose on exit.

“I have no idea. Just not our night. The last few weeks have been tough. Lost our step a little bit and finished 12th. Congratulations to the No. 16 truck. They did a hell of a job to win the last race and win the championship.”

Despite being quickest in one of two practice sessions earlier Friday morning, the Necedah, Wisc. native never had full confidence in his truck.

“I’ve been racing long enough to know when you get that really good feeling about the way things are going and I just never had it today,” Sauter said. “Even this morning, when we made our mock run and we were top of the board, it just didn’t seem gripped up. Tonight’s race was a bit of a shock to me, I didn’t think we’d be that awful. But we were.”

Crew chief Joe Shear Jr. threw everything but the kitchen sink at the truck throughout the race to adjust on it. But with no cautions besides stage breaks occurring in the 134-lap, 201-mile season finale, long runs proved costly.

“We did what we thought was right,” he said. “Anybody can second-guess it all they want. But we did what we thought was right and obviously, it was wrong. It was awful. We laid an egg tonight. It’s crazy, you got some races where you do a couple pounds of air pressure and a little bit of a track bar adjustment and it’s like night and day. And then today, you make huge adjustments and ‘ho-hum.’ Proud of everybody at GMS. Great season but just coming down the stretch here, we didn’t get it done. We just didn’t have it.”

But throughout the entirety of the season, they did have it. Sauter amassed a career-high six victories and 14 top-five finishes. It was runs of 11th, seventh and 12th to close out the season that doomed the program.

Sauter admitted the performance dropoff was too large to overcome.

“Momentum is definitely a factor in this sport,” he said. “And I can speak from past experience. In 2016, we got hot towards the end of the year, especially towards playoff time and won a couple races. And then came down here, had a good round and won the championship. When you get on a roll, sometimes you feel invincible and [Moffitt] just had it going on. We just struggled down the stretch. I can sit up here and sugarcoat it until the cows come home, but that’s not my style. Call it what it is: we sucked last week and we sucked tonight.”

Despite those monster numbers, failing to come through on this championship wasn’t as much of a downer for Sauter. He still felt there was plenty to be proud of.

“Last year was a little tougher to swallow because we ran second and third to Christopher (Bell) and lost the championship by one spot,” he said. “But tonight, you start running not very good, then there’s some hope on the first pit stop, and on the second pit stop we didn’t get any better. The season is nothing to hang our head about. Six wins and very consistent. We just had some missteps towards the end of the year. The season doesn’t sting very much because when you’re awful, you don’t deserve it. It is what it is.”

During stage two, teammate Sheldon Creed was racing Sauter hard for position. Some would argue that with a championship on the line, the No. 21 deserved more room. But the 2016 champion was having none of it.

“When you’re running as pitiful as we are, I don’t really give a shit, to be honest with you,” Sauter said. “It don’t matter to me. He’s just racing hard and we’re floundering around. it’s all good.”

Change will come in one way, shape or form this offseason, according to Sauter.

“Well, obviously we could be better,” he said bluntly. “There’s a lot of things we need to do differently because whatever we’re doing didn’t work. The offseason will be what it’ll be, everybody will have to gut-check themselves and we’ll see what’s up.”

However, this series veteran was able to keep it all in perspective and laugh. When asked what advice he’d give to the other three drivers he competed against in Justin Haley, Noah Gragson and Brett Moffitt, all younger competitors, Sauter had a drop the mic moment.

“Well, these guys ain’t old enough to drink,” he said. “But I can go home and have a 12-pack of Bud Light. But obviously these guys are tough, they’re young, they’re resilient, they’ll get over it and they’ll live to race another day.

“It’s a little different for me. Tonight just sucked. When you suck that bad, it’s whatever, you just go home and go ‘what the hell happened,’ that’s how I look at it. I’ll ask myself that for three months.”