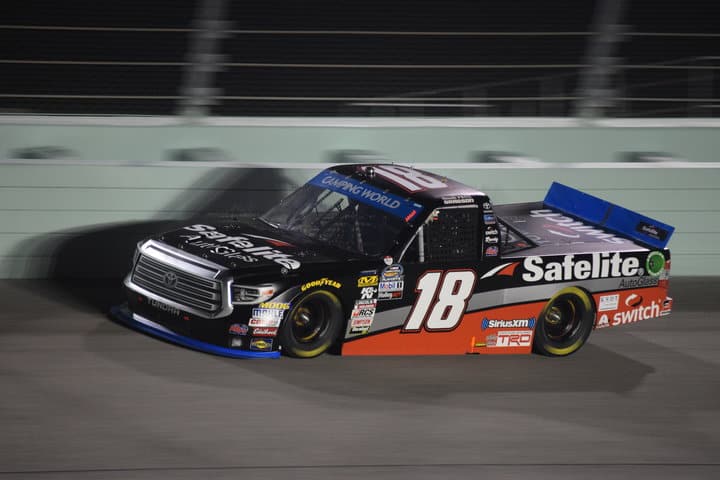 Heading into 2018, Noah Gragson was one of the preseason favorites for the championship. He made it all the way to the season finale at Homestead-Miami Speedway with a shot at the title.

Gragson started Friday’s (Nov. 16) Ford EcoBoost 200 at Homestead from third position, best of the Championship 4 drivers. He used the high line to get up to second in the first stage, where he finished.

The majority of the second stage belonged to Gragson and the No. 18 team, grabbing the lead on a lap 37 restart for the first time. He went on to lead 34 circuits, having a great side-by-side battle with fellow Championship 4 driver Brett Moffitt for the lead.

Splitting the final stage in half, Gragson believed he had a flat tire as he brought the No. 18 truck to pit road.

“I just started getting really tight three laps before we came down pit road, and felt like we were getting a left front just by the feel of it,” Gragson said after the race. “I wasn’t really sure, but I think I overblitzed it earlier in the run and got too tight.”

The flat tire caused a long pit stop for the No. 18 pit crew. With no caution for the remainder of the race, the No. 16 truck edged away from Gragson. He crossed the finish line in third, five seconds behind 2018 Camping World Truck Series champion Moffitt.

Despite coming up short in the championship battle, Gragson believed Homestead was a solid way to end his tenure with Kyle Busch Motorsports, racing hard with Moffitt.

“That was me driving 100 percent, driving my nuts off,” he said. “It was tough, but I guess it comes down to experience. I gave it all I got. I had my tongue hanging out, just burnt the tires off of it.

“…I  feel like this is one of the best races we ran all year. It is what it is, can’t change anything now. Got to move on and keep learning and get better, just keep on doing me.”

Gragson ends his full two-year stint with KBM with a pair of victories, 13 top-five and 31 top-10 finishes in 46 starts. Meanwhile, he believes had he had the experience Moffitt has in NASCAR, he might have had a better shot at winning the championship.

“It’s no excuse by any means, but it definitely helps,” he said of Moffitt having turned more laps at the track than him. “If I had run I think 42 Cup races – somewhere in the 40s, I think I would be able to get around this place pretty damn good, too. It’s no excuse. Overall, so fortunate for this opportunity.”

Gragson concludes the season with a solo victory at Kansas Speedway, where he dominated that race. The No. 18 had eight additional top five efforts, leading a series-high 659 laps.

He believes it’s a successful year.

“I don’t know if you can judge it off the numbers on a paper at the end of the year,” He added. “You can’t measure yourself off of someone else’s ruler. I feel like I improved from Daytona to the driver I was tonight, and with me being surrounded by great people, there’s only one way up and that’s to keep on progressing and getting better.”

“If you do the best you can do, you can’t do any better.”

Came up 1 spot short of winning the @NASCAR_Trucks championship but most importantly I had a good time. Thank you everyone who supports me, along with @safelite @KBMteam and @ToyotaRacing.

The Las Vegas native will jump ship to Chevrolet in 2019, replacing Elliott Sadler in the No. 1 car for JR Motorsports in the Xfinity Series. In a trio of Xfinity starts this season, he has a best outing of second, which was his series debut at Richmond Raceway.