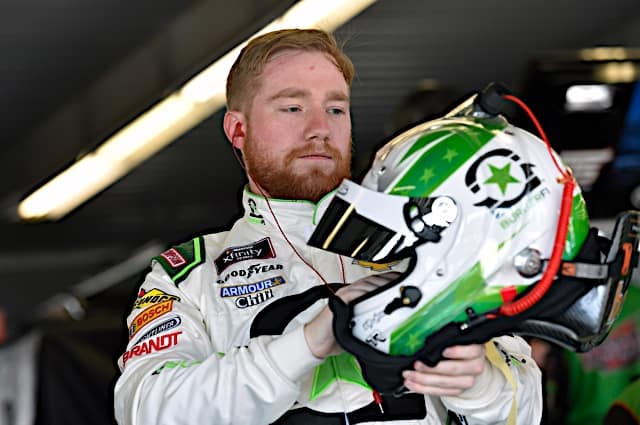 Reddick, 22, has made it to Ford Championship Weekend, though self-admittedly struggling through most of his rookie campaign with the No. 9 team. But that didn’t stop the California native from making a run.

With five top 10s in the six playoff races and an average finish of  7.2, Reddick believes the No. 9 team has a real shot of winning the championship on Saturday (Nov. 17). Despite struggling during the regular season, it was the strong postseason that gave him some confidence.

“I wouldn’t say with how we ran that I’m surprised we’re here,” Reddick told reporters on Thursday. “I feel like we could have done better in certain areas throughout the playoffs to give us more of a cushion. We still had to run good, still had to be consistent and get stage points, and we did each of those things to just barely survive.”

Indeed. With Cole Custer winning at Texas Motor Speedway and Christopher Bell stamping his ticket to Homestead at ISM Raceway, the final two positions went to Daniel Hemric and Reddick, nipping out JRM teammate Elliott Sadler for the coveted fourth spot. Had Justin Allgaier‘s brakes not failed late in the race at Phoenix, it would have been a battle until the checkered flag on whether Reddick advanced.

When it comes to JRM, both Sadler and Allgaier had made the Championship 4 at Homestead-Miami Speedway in each of the past two seasons. Reddick plans on getting advice from them throughout the weekend, though sticking to the No. 9 game plan.

“They’ve got a great notebook here,” Reddick said of his teammates. “Being that we got to come here and test, we’re going off what we learned in August moreso than talking to them a whole lot. When we practice on Friday, we’re going to wait and let them go out, get a feel for the racetrack, see what they’ve got and adjust from there.

When it comes to Homestead, Reddick won the pole for the XFINITY race last season, driving for Chip Ganassi Racing. He finished fourth. In three career Camping World Truck Series races at the track, he’s got a worst finish of sixth.

When it comes to worn out racetracks, serving the drivers very little grip, Reddick has stood out this season. The No. 9 car placed seventh at Auto Club Speedway in March, before winning the opening stage at Chicagoland Speedway in June. He got involved in an accident, finishing 33rd. At Darlington Raceway, Reddick was among the top five for the majority of the racing, taking the checkered flag in third.

The characteristics in those racetracks bodes well for Reddick.

“We’ve been fast at tracks like this,” he added. “We led laps at Chicago, we were good at Darlington and we never led at Fontana, but we were right there. We were pretty good at Kansas, too. I’m confident about how we attack these racetracks and Saturday.”

Out of the Championship 4, Reddick was the only driver to not have a realistic shot of winning the regular season throughout the summer months. Even still, he doesn’t think the No. 9 team is a dark horse come Saturday.

Reddick said: “Statistically, we haven’t run as well as the other three drivers. We definitely get around these older tracks pretty well. I really don’t feel like we’re a dark horse. I think it’s a pretty even playing field and we have an even shot. Everyone has their strengths and weaknesses. It’s going to be a tough fight. I think each of us have a good shot of winning this.”