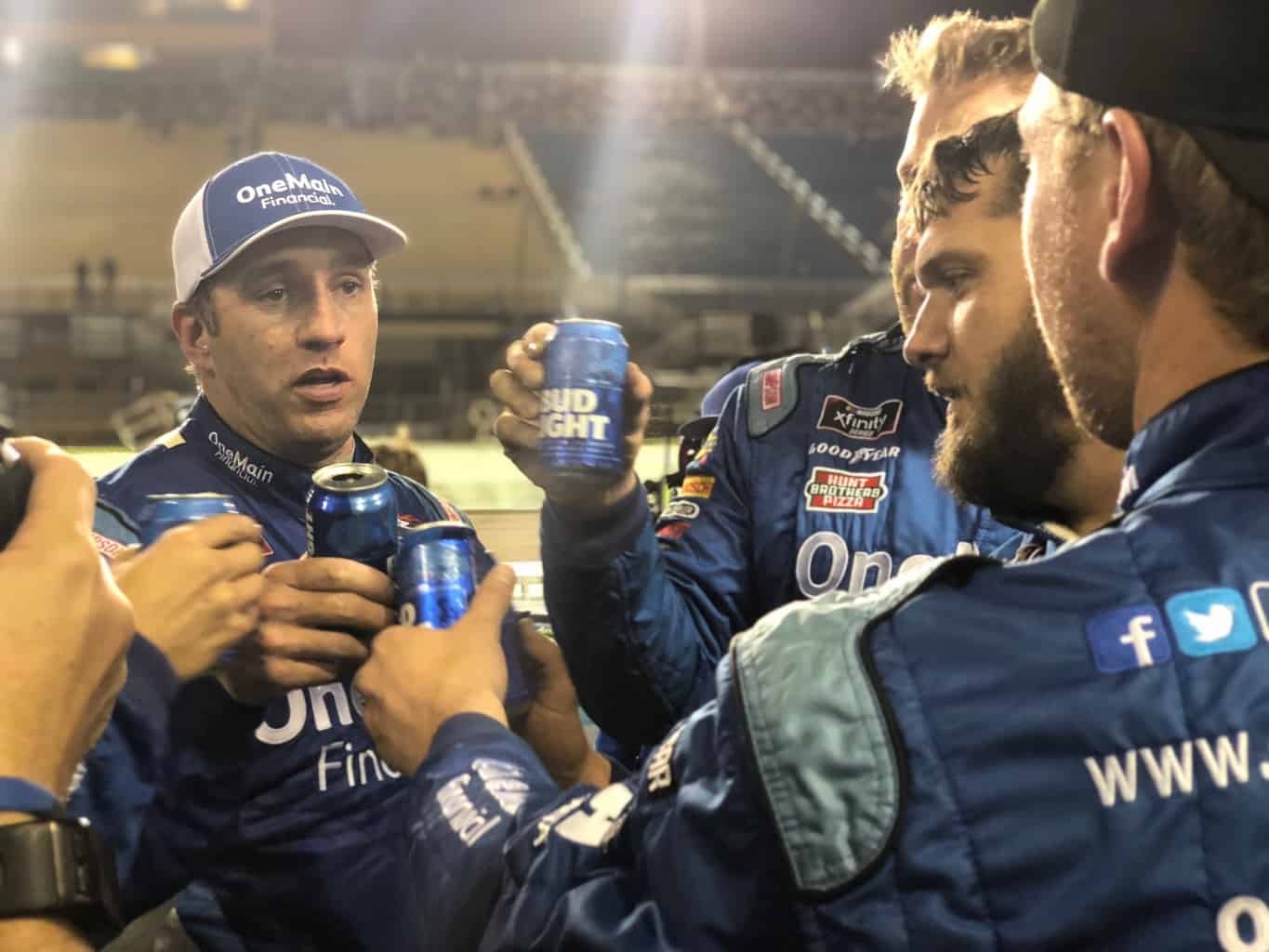 Elliott Sadler shares a toast in his final Xfinity start as a full-time driver on Saturday, November 17, 2018 at Homestead-Miami Speedway. (Photo/Davey Segal)

If Saturday night was Elliott Sadler’s final NASCAR race, he ended his career like he started it.

Raising hell with some liquid courage in his hand.

Sadler’s 14th-place result was secondary to the bigger story: the possible end to a career of one of the longest-tenured veterans in the series, “one of the good guys,” as they say.

Like his longtime friend and owner Dale Earnhardt Jr., he cracked open some cold ones on pit road with his team after the race to celebrate what has been a fun career.

.@Elliott_Sadler shares one final toast with his @JRMotorsports team following his final race as a full-time driver. pic.twitter.com/VT1JQvCE1e

“It’s tough. It is,” he admitted. “It didn’t really end the way we wanted to for our team. I’m sure it’ll hit me tomorrow, but it’s cool to see the laughter. This is such a good group of guys. I didn’t know how my emotions would be. But actually, I’m OK, man. Which makes me feel good about my decision. I feel good right now.”

Sadler pitted with under 10 laps to go for a vibration. In any other circumstance, the No. 1 would have stayed out on the track but didn’t want to jeopardize the eventual championship for his JR Motorsports teammate Tyler Reddick.

“I didn’t want to screw the No. 9 up,” Sadler said. “I had a vibration and my spotter said the No. 9 had a straightaway lead. We weren’t racing anything for 10th-place, so I just decided to come in to rather be safe than sorry. I did not want to take a championship away from Tyler (Reddick), Dave Elenz and that entire team. That’d be different if we were racing for a championship also. I didn’t want to take any chances.”

Sadler knows how it feels first hand, as a run-in with Ryan Preece hindered his chances to win a championship at this very track one year ago.

Throughout the day, tributes poured in. From competitors, fans and friends, Sadler felt a bit overwhelmed. But more than anything, thankful.

“I was trying to hold it together all day,” he said of his emotions. “And a few things got me emotional today. My son told me this morning he was sad. It’s like ‘don’t be sad. You understand why daddy is retiring,’ he goes, ‘oh yeah, to watch me play more baseball,’ and I’m like, ‘that’s exactly right. I’m happy about that but sad you won’t be in a racecar,’ and that was pretty emotional.”

“It feels right, I gave it my all, came up short, but I have no regrets in my career,” he said. “The opportunities I’ve had tried to make the most of them. I’ve had long enough to pursue my dreams and what I want to do. Now it’s time to help my kids pursue theirs.”

Life will go on, though. Attending ACC Tournaments, concerts and racing Dale Jr.’s late model at Myrtle Beach, South Boston and Martinsville are some things on his bucket list now that he’s retired.

But first things first: get back home and carry on a Sunday tradition with his children.

“My son and daughter both want to go hunting tomorrow morning,” he said. “So I’ll be up in a tree stand at 5:30 in the morning. That is my plan for tomorrow. That’s 100 percent what we do on Sundays. Last week we had a terrible week in Phoenix, Sunday I went took my son hunting, he got the biggest deer he ever got and I didn’t think a thing about Phoenix anymore.”

His final laps behind the wheel weren’t filled with tears or sadness. Just focusing on the task at hand, just like he’s done his entire career.

“I kept waiting for myself to get more emotional,” Sadler said. “But I was focusing on what I had to do. Which means I feel like I made a good decision.”

I can’t believe nobody has a kind word to say about Sadler retiring.
He took one of the hardest impacts at Pocono I ever saw. He and teammate Dale Jarrett sat on the front row and Vegas Bookies still had them 30-1. Jarrett won on a very late caution flag ending the race and I bought a new car. Elliott always remembers his Mother.