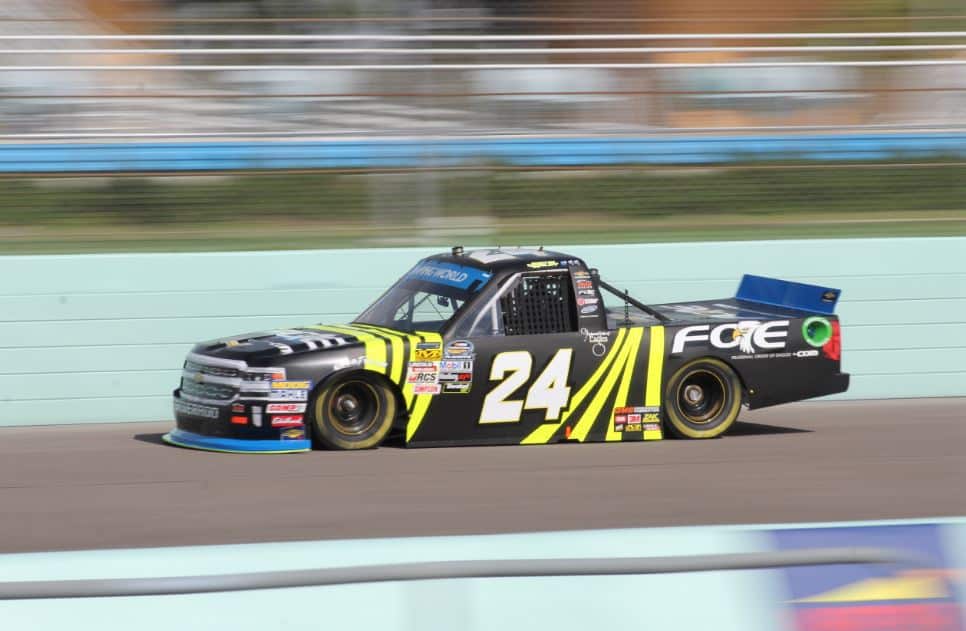 For GMS Racing’s Justin Haley, he had one of the best trucks out there on Friday night (Nov. 16) at Homestead-Miami Speedway.

Problem is, his truck was at its best for only the first couple of laps of a run.

“We’d fire off good, but about five or 10 laps into a run, we’d just lose it all,” Haley told Frontstretch after the race. “About 15 laps into the run, we’d get it all back.”

Later on in the evening, Haley elaborated on his issues.  After five laps, his No. 24 Chevrolet would plow up the track, then get loose in the middle of the corner.

That short-run speed haunted his chances for a Camping World Truck Series title.  Starting fourth, Haley quickly moved up to second and made a move to the inside of polesitter Grant Enfinger in Turn 1 for the lead.  Haley then got quite loose and dropped back down the order.  That was his one and only chance to lead the race.  It wasn’t long before Noah Gragson and Brett Moffitt were able to sweep past and Haley began to drop back.

That’s how it would go for Haley in a clean race with long green-flag runs. In the time between losing his speed and the field coming back to him, Haley would lose a bunch of time to Gragson and Moffitt, in addition to others such as Matt Crafton.  Once the truck came back to the forefront, he would be five seconds behind or more.

Even with three changes for his GMS Racing pit crew to execute a fix on the issues in Haley’s truck, the problems persisted.  With the entire final stage being run under green, he could never get caught back to up the leaders.  Haley finished eighth, but he was more than half-a-lap down to Moffitt at the finish.

Then again, he wasn’t alone at GMS in having issues.  Teammate Johnny Sauter had a terrible time trying to get his truck to handle and ultimately finished 12th.  Haley noted during his press conference that he was doing everything similar to Sauter.  They ran the same front and rear-end setups, in addition to making a trip to the Chevrolet simulator together earlier in the week.  It was enough for Haley to quip that it made it look like he and Sauter were a married couple.

“It’s been a really good year, for sure,” Haley continued.  “I couldn’t ask for anything more.  To get one win, then two and three meant a lot to me.  To get a chance at [the championship] in the final four, that’s all you could want.”

Haley entered the 2018 season with only the full-time Truck ride on his docket.  As the season continued on, he added a part-time XFINITY schedule to his plan (one race in the GMS No. 23 and two more in the part-time No. 24).  He nearly won the Coca-Cola Firecracker 250 at Daytona, but was penalized for going below the yellow line on the run to the finish.

For 2019, everything seems to be up in the air for Haley.  He indicated after Friday night’s race that he doesn’t have anything set in stone as of now.