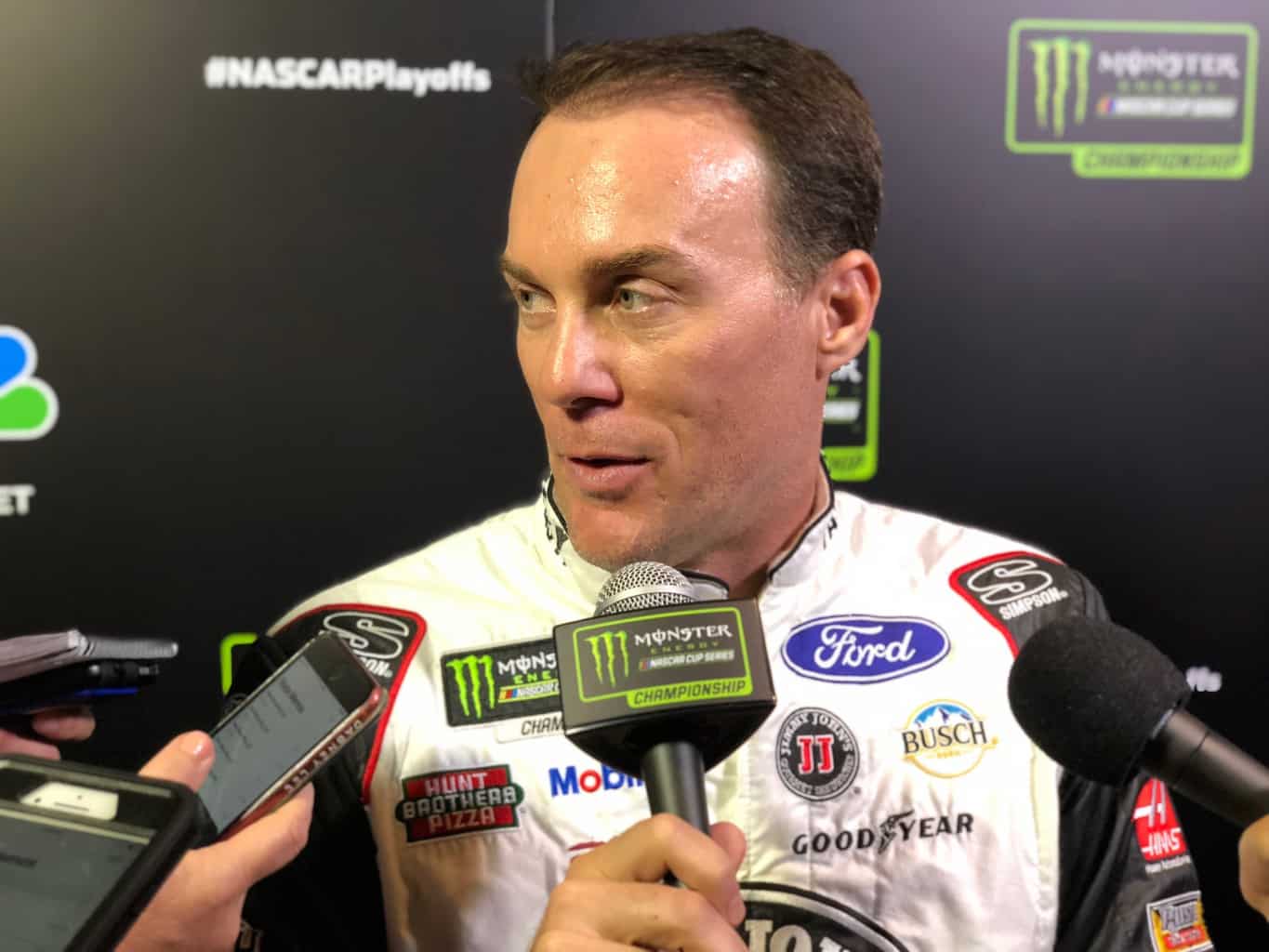 Kevin Harvick while being interviewed at Championship 4 Media Day at The Miami Beach EDITION on Thursday, November 15, 2018. (Photo/Davey Segal)

“I feel like we race with a chip on our shoulder every week,” Harvick said heading into Ford Championship Weekend. “For me, there’s always some incentive in proving to people that you can do something that isn’t what they think you should do. I think you can look at my whole career. You shouldn’t win. You couldn’t win. Then you did.”

Harvick’s second consecutive Championship 4 berth and fourth in five years comes off the heels of a weekend at ISM Raceway where survival was the name of the game. A 40-point penalty for an illegal spoiler left him just three points above the cutline. He’s also without the services of his crew chief and car chief the rest of the year.

“Last week it was, this penalty is going to slow them down,” he said. “Like I told you last week, when they take 10 away, we find 20. It’s just the mentality of the race team. It’s always push the limits. When they back you against the wall, make it better than it was before.”

The No. 4 Stewart-Haas Racing team has done that well ever since its inception at the start of 2014. Led by crew chief Rodney Childers, who will serve the second of his two-race suspension at Homestead-Miami Speedway this weekend, they’ve amassed 22 victories at SHR. With a win Sunday (Nov. 18), that number will climb to 23. It would equal the Bakersfield, Ca. native’s total in 13 years at Richard Childress Racing.

Yet despite a record-number of victories (eight) and tying his career high in top 10s (28), Harvick doesn’t consider 2018 the peak of his career.

• Keelan asked to climb the fence if he wins the championship on Sunday
• Doesn’t consider this season his best performance wise. That’s 2014
• Credits @TonyOldman41 for keeping everybody calm last weekend pic.twitter.com/V1I669Z0kP

“I don’t think it’s been the best year performance-wise,” Harvick said. “I feel like in 2014, we had the fastest cars that I’ve ever driven in my career, but we were so new to everything, so young, we made so many mistakes, had so many things break, we just didn’t capitalize. We were in our first year […] obviously, with everything that’s happened this year, you want to win the championship because you think it would be icing on the cake with everything that you’ve accomplished.  But it’s just not that easy.”

His competition of 2015 champion Kyle Busch, reigning champion Martin Truex Jr. and Joey Logano could be considered the toughest since this format’s inception half-a-decade ago. With Busch being Harvick’s main contender this season and Truex looking to defend his title, Logano seems to be the odd man outside “The Big Three,” but Harvick sees them as a threat.

His Ford competition should be stout on Sunday. But personally, team and sponsors aside, it’s Harvick who wants to bring another championship back to the Blue Oval brigade. Ford hasn’t won the driver’s championship since Kurt Busch in 2004; one Sunday would also coincide with their first manufacturer’s title since 2002.

“There’s a lot of incentive,” Harvick said. “When we left Chevrolet, there were a lot of people who said we could never contend for another championship. For us, within our walls, that’s been a lot of motivation since we started. To know how important it is for Ford to put themselves back in the mix, obviously Penske has done a good job, but to have good cars in the mix to win another Cup Series championship, motivates us. So we have a couple different reasons to be motivated over that situation.”

Being the dominant driver throughout the season, some would say anything short of a second championship for the No. 4 team in five years would be a disappointment.

“I don’t know that it would be,” he said. “There’s nothing that’s going to devastate us to the point of not being able to function any more. But to go along with everything you’ve done this year, it definitely would seem fitting to add that to the year end.”