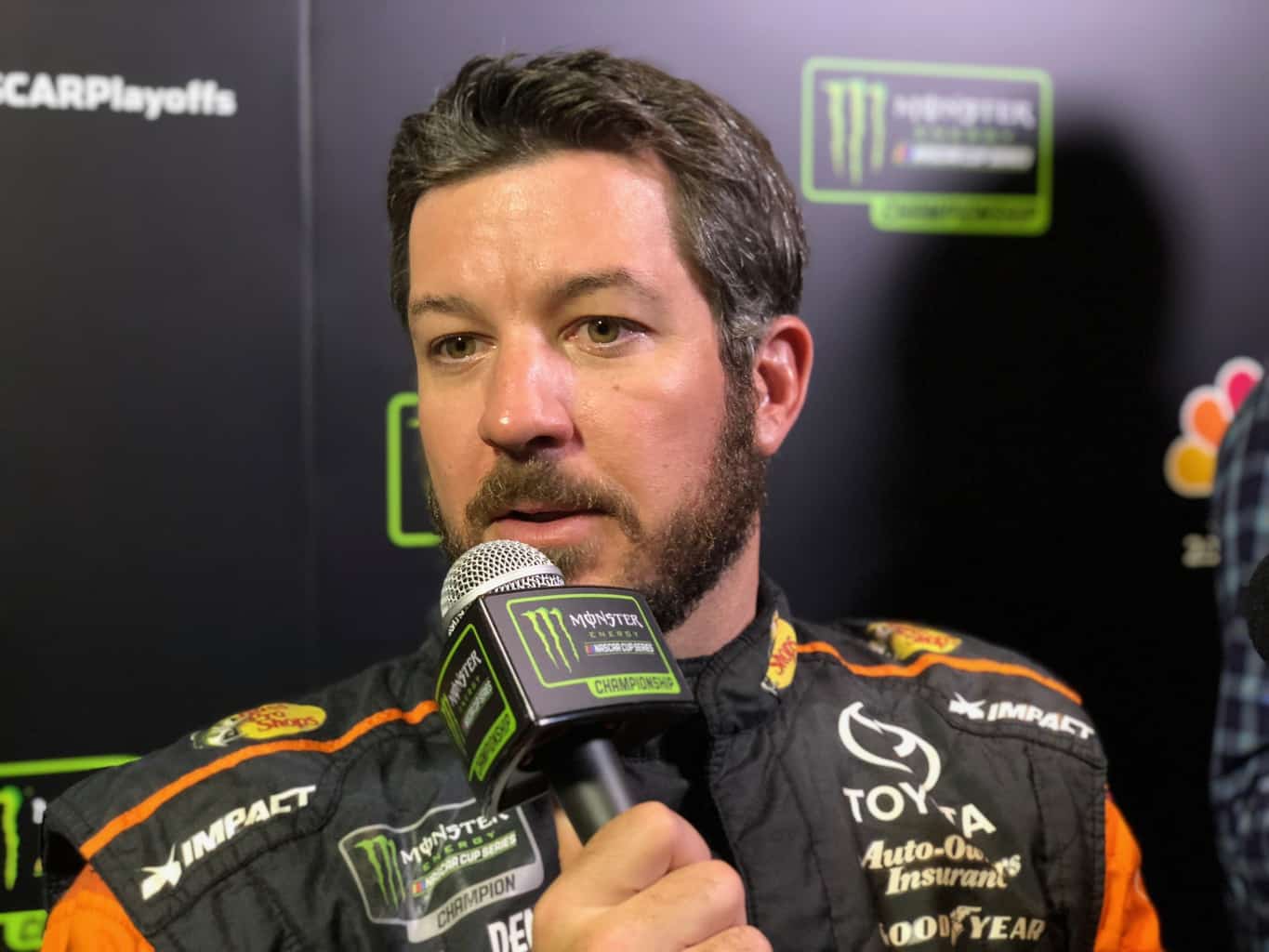 Martin Truex Jr. while being interviewed at Championship 4 Media Day at The Miami Beach EDITION on Thursday, November 15, 2018. (Photo/Davey Segal)

The worst-kept secret in the garage became public this month, as Truex and crew chief Cole Pearn will move to the No. 19 Toyota with Joe Gibbs Racing next season. But this weekend is all about defending the title and sending FRR out on top.

“I haven’t thought about not winning it. I haven’t thought about winning it much ether,” Truex said of possibly hoisting his second championship trophy. “Just trying to relish the opportunity, take advantage of the opportunity. Other than with the situation, with the team going away, I know no matter what happens, we’re going to give it our all and celebrate Sunday night as a group. Because the last five years have been an unbelievable ride.”

“It’s been a joy that, as far as racing goes, has been the time of my life. I’ve realized dreams I’ve had since a kid because of this group and this team.”

The team had a gathering to send the hauler off to Homestead-Miami Speedway one last time earlier in the week. One that, for Pearn and company, was rather emotional.

Sights and sounds from last night's 78 team send-off in Denver. ?
BIG #shoutout to our hauler drivers for getting us to the track and back every week and to every single person at our shop for building the best race cars in the business. #WeAreFurnitureRow pic.twitter.com/tzYjOkEr5l

“I think for all of us Sunday night it’s going to be that way too,” Truex said. “You just get tunnel vision in this sport, and you get so focused on what you’re doing. You just get so focused in on doing your normal routine, but it finally all caught up to them. It hit them at that moment when they all looked around and said, that’s the last car we’re sending out of here to go to the racetrack. I can certainly understand it.”

From humble beginnings on June 5, 2005 when the team made its debut, to last year’s championship, to Sunday’s final ride, all the moments in between have been thanks to hard work and dedication from team owner Barney Visser (plus a lot of dollars), FRR and employees.

“It’s going to be hard to set in,” Truex said of the impending end of FRR cars on the racetrack. “I’ve never been on a team that I feel like makes me a better driver every single weekend. I don’t know if we’ll be able to continue that and put together a group that’ll keep that going. I know Cole is a really big part of that. Certain things that go into building a championship team. Decisions thought out he week. The dynamic will change. I feel like we can win. Doesn’t matter what happened last week, every week we go to the track we have a shot to win. I felt that for four years and it’s unbelievably fun to feel that.”

But the success for Truex didn’t come easy. Prior to joining FRR in 2014, he only had two career wins to his credit. After a rough inaugural season in the No. 78, things started coming together.

“In 2014 we struggled a lot and our cars weren’t very good. We had some major issues that we had to figure out, but he never pointed the finger at me,” Truex said of Pearn. “He was an engineer, he wasn’t a crew chief but he did a lot of the setup and he was the one writing down the notes and taking my feedback. As far as I know, and as far as I can tell, he believed in me that time when we were running 20th. He always had my back and was always going the extra mile to figure it out. Once we did, you see what happened that gave me the trust and confidence that he he had my back, he was my guy and we figured it out together.”

When the checkered flag flies, the end of an era for Truex, Pearn and the FRR will come to a close. The hauler will make one more trek out West to Denver, Colorado. But the lasting memory of the team will be a happy one.

“Champions,” Truex said bluntly. “At the end of the day, that’s what you set out to do when you go race. That’s the ultimate prize. When the season starts and you’re getting ready for Daytona, everybody says ‘what do we gotta do to win a championship this year?’ To be a team that’s only been around for (15) years at this level and have a championship is something really to be proud of and it’s something that may never happen again. Pretty awesome story, I think.”

Performance wise this season, it’s been down compared to 2017. But with four wins and another Championship 4 berth, confidence isn’t lacking for the Mayetta, New Jersey native.

“I would say it’s probably not lights out like it was last year,” Truex said of the No. 78’s performance this season. “I would say that throughout the season, we’ve had it. Vegas, we found it, and we had that race. Just we weren’t good on the short runs, and the race kind of didn’t play into our hands. It’s been harder to hit it this year. If I compare this year to last year, I would say this year the No. 4 car, if they could hit it, they could beat us. This year the No. 4 car has been lights out, and if we hit it, we can beat them. I know, if we hit it, we can beat any of them, and we showed that.”

As for the elephant in the room, A.K.A. Joey Logano‘s bump-and-run at Martinsville and Truex vowing that he “(won’t) win the damn war,” he’s not necessarily changing his driving style.

“I would say that I’m not approaching this race any different because of that,” Truex said. “I still remember what happened and will use that to my advantage this weekend.”

But if the No. 22 is leading on the final lap with Truex in second? He’ll ace him differently.

“Absolutely,” he said. “I have a free pass. He already told me that. Told me it’s fair game, so here we go.”

“I guess I would probably be more OK than I would last year (if we didn’t win it),” Truex said. “No matter what, we’re going to celebrate and have a good time with it. Hopefully it’s on the stage with a big trophy […] all that being said, I feel good about this weekend. But it’s going to be tough. It’s not going to be easy. There’s no question.”