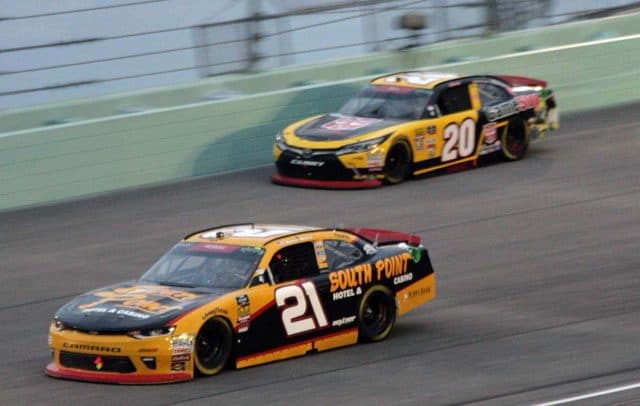 In Saturday’s XFINITY Series Ford EcoBoost 300, getting the high line up near the wall to work was key for success.  Richard Childress Racing’s Daniel Hemric simply could do not it on Saturday.

“We lost the ability to make hay with those guys way, way up top,” Hemric said after the race on pit road.  “Our car really wanted to be down low by the white line.  On the last run, our car really took off and we had a lot more speed than [the leaders] on the bottom.  Then, I got the front tires hot trying to make lap time and faded there with 15 [laps] to go.”

Hemric continued on to state that he did try to run the top, but that he would simply give up too much lap time.  As a result, they reverted to the plan that they first came up during practice on Friday, which was to run the bottom.

Despite the issues running high, Hemric could still run quite well.  Starting 10th, he quickly moved up into the top five.  He managed to run all the way up to second and was gaining on leader Cole Custer at the end of stage one.  A bad pit stop dropped Hemric back to seventh and forced him to spend the entirety of stage two fighting back to regain his lost ground.

At that time, Hemric believed that he had a race-winning or a second-place car.  When the sun went down, the No. 21 Chevrolet actually did get a little faster but then lost the ability to turn to a certain degree.

Hemric’s car likely had the right handling characteristics for success, given the complete lack of cautions outside of the stage breaks.  He was not all that great early in a run, but the car really came to life later on.

Despite the handling issues, Saturday’s Ford EcoBoost 300 was still a very good race for Hemric.  After Christopher Bell‘s late flat tire, Hemric brought his South Point Hotel & Casino Chevrolet home in fourth.  Given the form of the Championship 4, finishing fourth was only good enough to claim third in the points for 2018.

With the end of the 2018 XFINITY Series season also comes the end of Hemric’s full-time career in the series.  For 2019, he will embark on his rookie year in the Monster Energy NASCAR Cup Series, replacing Ryan Newman in the No. 31 Chevrolet.  Hemric has not closed the door on a potential part-time schedule in the series in addition to his Cup responsibilities. During his post-race press conference, he stated that he is more than open to more races.  The ability to run XFINITY Series races in 2019 is going to depend on what Richard Childress allows him to do.

“The ability to run XFINITY Series races in 2019 is going to depend on what Richard Childress allows him to do.”

I would not be surprised if Nascar, during this off-season, implements additional rules further limiting cup drivers’ participation in Nascar’s lower level series (though, it is not like Hemric is a big threat to take away meal money from the Xfinity drivers of next year) .

Topic suggestions for off-season articles by any of the Frontstretch staff:
1. Determining the owners championship within each of the Nascar series, and the benefits, if any, of winning an owners championship (other than bragging rights, I assume there are some tangible rewards; but, for all I know, this is just a glorified participation trophy). Regardless, I do not expect to see many, if any, t-shirts indicating SHR won the 2018 Xfinity owners championship. I think I read where Nascar is changing the point system, or something, for the 2019 owners championship of the two lesser series (as I recall, the changes are to encourage teams to use drivers other than cup drivers – such might be good for an owners championship scoring, but might be lousy for obtaining sponsor revenue for one or more races).
2. Determining the NASCAR Manufacturers’ Championship, and the benefits, if any that accompany the championship (I may be wrong, but the F1 constructors’ championship seems to be a much bigger deal, compared to Nascar’s manufactures’ championship [assuming these are comparable championships], as money distribution within F1 is influenced, in part, for having won the previous season’s constructors’ championship).
3. What is done to a car to make it good for short runs and what is done to a car to make it good for long runs (I assume there must also be a set-up that is neutral, without favoring short or long runs, but I do not know). In more than one post-race interview this season, I have read a crew-chief or driver mention they won, or lost, the gamble of bringing a car/truck to the track that was set up to run well on short runs, or set up to run well for long runs (I assume such an article could be dumbed-down for idiots such as myself, yet remain sufficiently technical to be informative to gear-heads).