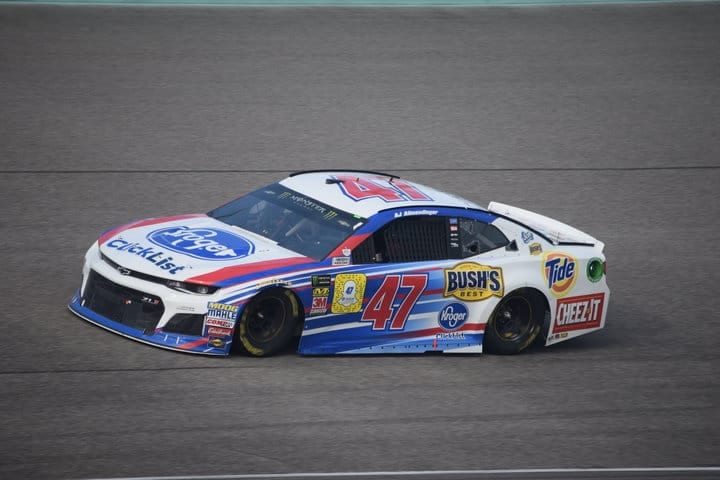 For AJ Allmendinger, Sunday’s Ford EcoBoost 400 was always going to be a sad affair. It marked his final race in the No. 47 Kroger Chevrolet for JTG-Daugherty Racing.  It also could mark the last race of Allmendinger’s career, period.

After the race, he stated that he has absolutely nothing booked for the 2019 season in any series at this time, including for January’s Rolex 24 at Daytona.  In addition, Allmendinger posted an eight tweet thread on Twitter Saturday night, thanking all those that helped him along the way.

1) On the eve of what quite possibly could be my last full time race in auto racing I cant help look back and thank the people that have made my career what it has been. @paultracy3 for giving me an opportunity in karting to make a bigger name for myself and push me to the next

2) level. Skip Barber himself for believing in my talent and helping me through his organization and all those people in that organization. Rick-Rat, @BeeDubb99 @OzzNegri and so many more. Carl Russo for giving me the chance to win a Toyota Atlantic Championship and make my dream

3) come true & race in CWS. Jerry Forsythe for giving me the chance to join his team and go out win so many races. Do something I always wanted to do and stand on the top of a champcar podium. @redbullmotors for sticking with me in champcar and giving me my first opportunity in

4)Nascar. @RPMotorsports and especially the King himself for allowing me to continue in Nascar when I wasnt sure what my next move would be. @Team_Penske and truly RP for making a life long hope and dream of wearing those iconic colors come true. And walk with you side by side

5)through gasoline alley for the Indy 500. James Finch for giving me a car to race for his team and giving me a second chance to get back into the sport. And @JTGRacing Tad & Jodi for giving me a home for 5 years. Winning a cup race together. Making the playoffs. So many good

6) memories. All of our sponsors we have had but especially @kroger for what they have provided for this team over the last 4 years but more importantly all the people we have met and friendships we have created. It has meant the world to me and my family.

7) And last but not least. @MichaelShankRac My big brother. One of my closest friends. My family. Words can not even begin to describe how I feel bout you Shank. The ups and downs. The wins and losses. U have done so much for me. I love you from the bottom of my heart.Always will

8) We wish we could go out on our own terms. Not always do we get what we want. But with that said I have been so blessed. So lucky and fortunate. No regrets. Cant wait for what the future holds. And especially cant thank all of my fans and supporters enough. U have made it great

On Sunday, Allmendinger had a decent day but ultimately nothing special.  He managed to keep himself out of trouble but simply did not have a car that could compete with the frontrunners.  The car seemed to come to life late in the event, though.  While teammate Chris Buescher cut a right rear tire shortly before the final yellow and finished 23rd, Allmendinger finished as the first driver one lap down in 19th.  He will finish the 2018 season 22nd in points.

Allmendinger continued to display his disappointment on pit road after the race.

“It’s bittersweet,” he said.  “It’s sad, but [there are] better things in the future.  I truly feel that I left this place better than where we started when I got here.”

Allmendinger admits that the current Monster Energy NASCAR Cup Series schedule is quite the challenge.  That said, there are always certain people that can make things that much better.

“If you don’t have fun guys to work with and guys that enjoy it, it can make [the Cup Series] a grind,” Allmendinger continued.  “It’s a grind anyway.  I’m not going to miss waking up every weekend and going to a race.  Just being here with the guys and going through the ups and downs and fighting together.”

If Sunday truly is it for Allmendinger in NASCAR, he ends one of the more varied careers in recent memory.  Allmendinger came to NASCAR from the Champ Car World Series at the end of 2006.  After only three Truck starts, he was thrust into Red Bull’s No. 84 as a rookie in what could be described as a worst-case scenario.   He was with a brand-new team (Red Bull) fielding cars from a brand-new manufacturer (Toyota).  In addition, the 2007 Cup Series season was not only split between two different race cars, but it was also one in which nearly 50 teams originally announced plans to run the full season.  The year was nothing short of a struggle just to be able to race.  Of the 36 races, Allmendinger managed to qualify for only 17 of them.

2008 didn’t start much better. After failing to qualify for the first three races, he was sat down in favor of Mike Skinner for five races.  Once he returned, his performance was slightly better but not enough to survive the season.  Allmendinger was fired after Kansas and replaced by a combination of Skinner and Scott Speed.  After one race at Michael Waltrip Racing, he took over Gillett Evernham Motorsports’ No. 10 after Patrick Carpentier was dumped.  Here, Allmendinger found his sea legs.  In the final five races of the season, Allmendinger had four top-20 finishes and boosted the No. 10 from 332 points out of the top 35 in owners points to only 80 behind.

The late season performance resulted in Allmendinger getting the nod for the full 2009 season in the No. 44 for the newly-merged Richard Petty Motorsports.  He drove for the team for three years, earning four top-five and 24 top-10 finishes.  A move to Team Penske in 2012 was ultimately derailed after he failed a drug test for Adderall, the result of taking what was described to him by a friend as an energy supplement pill.

After completing NASCAR’s Road to Recovery, Allmendinger embarked on a very unusual split-schedule in 2013.  He raced part-time for Team Penske in the Verizon IndyCar Series and with Phoenix Racing in Cup.  Later in the year, JTG-Daugherty Racing took a chance and signed him to platoon with Bobby Labonte in the No. 47.  That resulted in five full seasons with the team that brought them their first Cup victory at Watkins Glen in 2014, six top fives, 28 top 10s and two pole positions in 193 starts.  In 371 total Cup starts, Allmendinger has the one victory, 11 top-five and 57 top-10 finishes.

In addition, Allmendinger has two career victories in the XFINITY Series, both coming for Team Penske in 2013 on road courses (Road America and Mid-Ohio).  Finally, he has two top-five and three top-10 finishes in 13 career Truck starts.

Always had a soft spot for AJ. Hopefully something will come for him on the track. If not something in media, his knowledge is worthy.

Maybe now we will hear the complete story of NASCAR Road to Recovery. And how AJ was set up! Funny how AJ got randomly checked the first time he took this pill. Like when Spencer Gallagher wins his first race and promptly get drug tested.

I’m an A.J. fan, it’s pretty sad that he doesn’t have a good ride for next year. He made the most out of inferior equipment evert week. You could see on a straightway, big teams would just pull away. JTG is switching engines, along with rule changes that are supposed to level playing field. It’s my bet that
@JAGRACING is going to regret this decision.