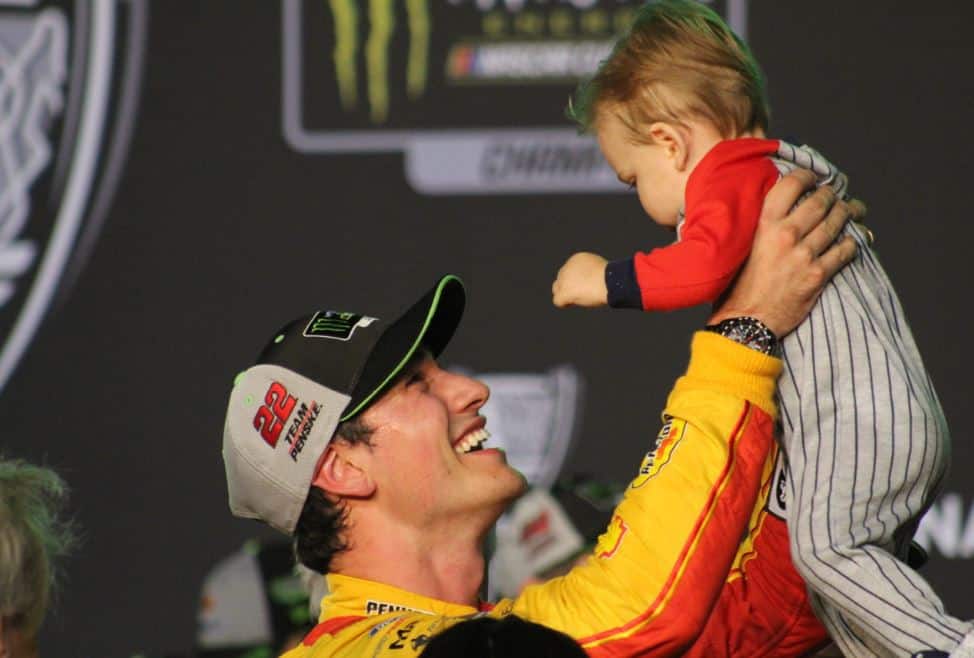 After arguably the most intense drive of his racing career, Joey Logano circled back to the basics atop the championship stage at Homestead-Miami Speedway.

The hard drive saw the Team Penske man burst out to the lead with 12 laps to go and pull away from Martin Truex Jr. to score his first Monster Energy NASCAR Cup Series championship.

But following the fast laps, cool-down lap and a few wicked burnouts, Logano spent the next several minutes soaking in the victorious moment with his family; father Tom, wife Brittany and son Hudson.

“When you see the people you love the most, I think that’s when you break down the most,” Logano said. “You just — you think about how much they were there for you all the way through, through the good times and the bad times they were there. To celebrate that moment with them is so special.”

10 years removed from his first Cup Series start in 2008, Logano’s rise to the green-and-black championship stage was loaded with criticism, high expectations and some controversy sprinkled in. Jumping from Joe Gibbs Racing to Penske in 2013, the same factors followed, however, the performance took center stage.

Winning 19 of his 21 career Cup victories in Penske’s No. 22, Logano scored the biggest win of all on Sunday night. And with his son Hudson in attendance, you might as well have some fun with it.

“I mean, you’ve got to have fun with it, you know,” he said. “It’s hard to put it into words, the way you feel at that moment.”

“There’s a lot of support that goes back and forth,” he said. “This isn’t something I take lightly going into a race weekend. But if you think about the amount of time you need to take away from your family, missing things with your kids and missing baseball games or whatever it may be, this is a commitment. This is a long season. This is not easy to do.”

Having his son in on the fun, the celebration brought Logano back to his first experience with racing on one Christmas morning. The hours of traveling, thousands of laps and countless autographs and interviews in between quickly took to the backseat.

“The things that go through your mind,” he said, “you think about that moment Christmas morning when I walked out into the garage and saw a go-kart in there. And that was the beginning. That was it. All I wanted to do was drive from there out.

“My goal was to be a NASCAR champion, and it took so many years and so many people and so much commitment from everybody to do it. All that stuff goes through your mind. When you see [your family], you want everyone to party with you, you know, and celebrate and be there.”