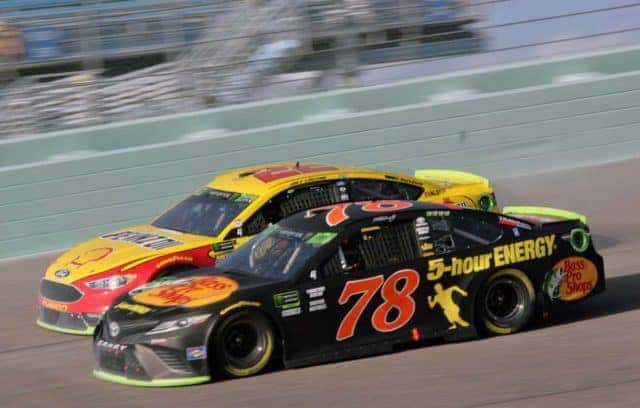 Out of Sunday’s (Nov. 18) Monster Energy NASCAR Cup Series Championship 4, Martin Truex Jr. came in with the least momentum. But he was wheelin’ the No. 78 car around Homestead-Miami Speedway for Furniture Row Racing’s farewell race.

Through the opening two stages, Truex had a top-five car, placing fourth and fifth, respectively. But after Kyle Larson wrecked out in the third stage, the race was up in the air.

With 49 laps remaining in the Ford EcoBoost 400, Truex passed Joey Logano for the race lead, driving away from the No. 22 car. But during a cycle of green flag pit stops, the No. 78 car fell off the jack, costing Truex upward of five seconds. Once he got back on track, he was chasing down both Logano and Kevin Harvick.

Then a caution flew with 21 laps to go and Kyle Busch had yet to pit. The No. 18 team made up for a pair of bad pit stops earlier in the race to get Busch out front. Truex, Logano and Harvick were just behind.

On the restart, Truex drove hard into Turn 1, clearing Busch. But with 15 laps remaining, the No. 22 car got by the No. 78, where Logano drove away with the championship. The No. 78 finished runner-up, 1.7 seconds behind.

“I just needed time. That’s all I needed,” Truex said after the race. “They were faster than us for 15 or 20 laps all day long. Last year we took advantage of the short run car at the end – the [No.] 18 car should’ve won the race and tonight we should’ve won the race and they [Logano] took advantage of the short-run car. I don’t know what else we could’ve done.

“To come here and almost upset the field and almost win it back-to-back was really awesome. I just wish that last caution hadn’t come out. Other than that, I don’t know what we could’ve done.”

Had the race gone green, Truex fully believes the No. 78 would be hoisting the championship trophy.

“We had the car to do it at the end, it just didn’t work out,” he added. “They were so much faster than us for a couple laps on the short runs. Just couldn’t hold him [Logano] off.”

The second-place finish in the championship marks three top-four efforts in the past four seasons. In 2016 — the lone year he hadn’t been apart of the Championship 4 — Truex won four races, arguably having the best season in the series.

Truex ends 2018 with four victories, though none in the second half of the season. The No. 78 also had a career-high 20 top-five finishes, adding an additional top 10.

However, Homestead was Furniture Row Racing’s last start in NASCAR, as a lack of sponsorship forced team owner Barney Visser to shut the team down going forward. It was a great five years for Truex with the Colorado-based team.

“I’m going to miss these guys,” Truex said. “Wish we could’ve won it. We had it. We just couldn’t go over 15 laps. I knew that last restart was going to be tough. We were able to get the lead, I just couldn’t do anything. I was just slow for 15 laps. We turned and I’d try to go as fast as those guys and I’d be dead sideways and I just  I couldn’t do it. I don’t know what else I could’ve done. Not the way we wanted to go out, but hell of an effort.”

In 451 career Cup Series starts, Furniture Row Racing recorded 18 victories — 17 of which were with Truex (Regan Smith got the teams first victory at Darlington Raceway in 2011). Since 2016, when the team moved to Toyota, the No. 78 recorded 16 wins and the Cup championship in 2017.

Truex will be joining Joe Gibbs Racing in 2019, taking over the No. 19 ride which had been piloted by Daniel Suarez for the past two seasons. Regardless, of how that goes, his time at Furniture Row is a time the New Jersey native will never forget.

Truex said: “Best time of my life. I don’t know what else to say. Those guys have been amazing. They’ve made me a superstar in NASCAR. I’m just very thankful for them all.”

So True x thinks he’s a NASCAR superstar does he. And with less than 20 wins.

I thought the same thing when I heard him say that. But you have to remember in this culture, it’s what you are doing now. Anything more that a few years old is ancient history and really don’t count any more.